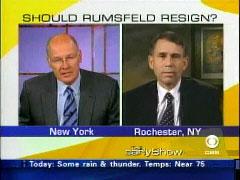 Tim Graham and Mark Finkelstein have already reported on the mainstream media's Rumsfeld bashing interviews with retired General John Batiste. So it’s no surprise that The Early Show has also piled on. In a segment that aired at 7:05AM EDT, on the April 14 edition, correspondent Bill Plante listed the generals who are calling for Defense Secretary Donald Rumsfeld’s resignation. It was a fairly straightforward piece, but Plante couldn’t resist getting in at least one liberal zinger:

Plante: "The White House says that the defense secretary hasn't discussed resigning with the president and the president isn't about to fire him. Of course if the president did, he'd be admitting that he had failed."

Smith: "Were you frustrated in that system?"

Smith: "And I just get the sense from looking and reading the, uh, the, the opinions from you retired generals who want Rumsfeld's resignation that he just was literally just not listening enough."

Finally, Smith preceded a rambling question by indicating that Rumsfeld should have simply listened to him:

Smith: "You know, it's interesting, because we've interviewed the secretary here and one of the issues that, right from the beginning of the war, are there enough troops on the ground, do you have what you need to effectively fight this war effectively, to win the peace. He said, well, I'm relying on my commanders on the ground and, and we suggested to him, well, maybe your commanders are telling you what you want to hear. Does that ring true to you, at all, as a scenario that happened over the last three years?"

Count Harry Smith among the retired generals who are ready and willing to give Donald Rumsfeld advice, if only he’d ask.