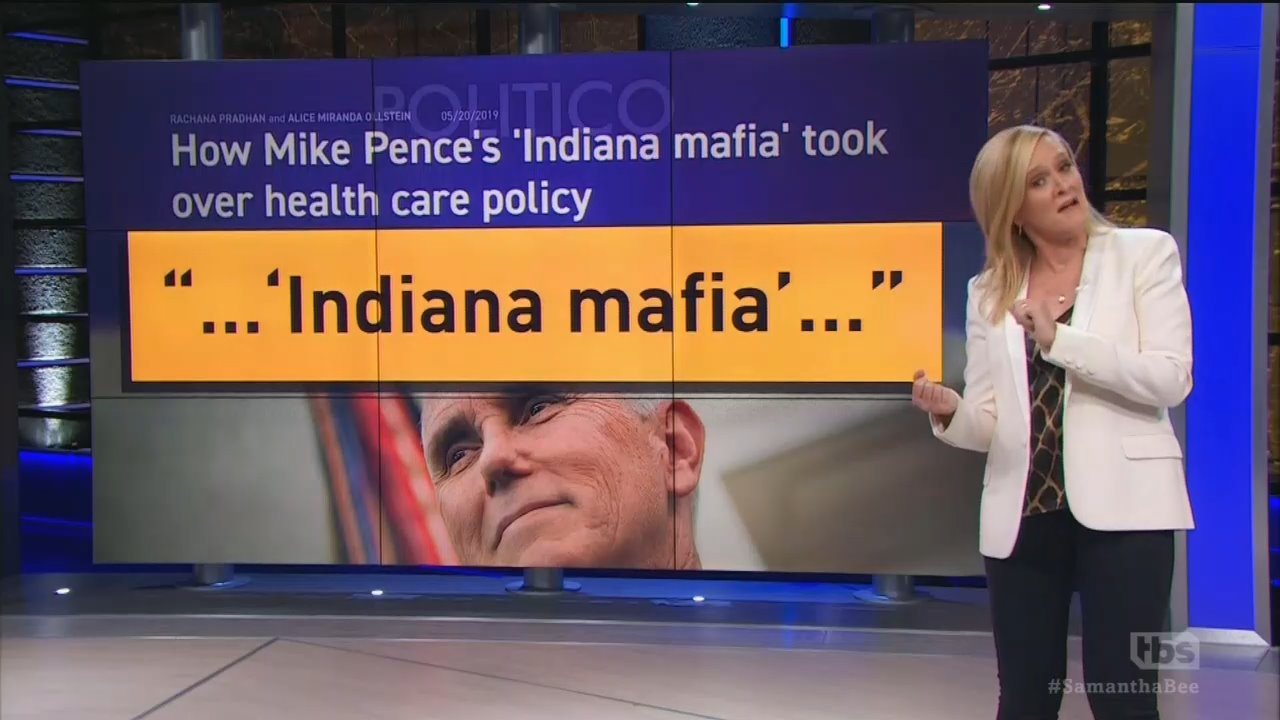 Taking a page out of Chris Matthews’s playbook, Full Frontal host Samantha Bee devoted the second segment of her show Wednesday to declaring war on Vice President Mike Pence; who would become President if the liberal goal of President Trump’s impeachment and removal from office comes to fruition. Bee had a particular beef with Pence’s pro-life voting record and his failure to implement Planned Parenthood’s agenda at the Department of Health and Human Services.

After playing a clip of a talking head accusing Pence of trying to “remake women’s reproductive healthcare in the United States,” Bee declared “It’s a bit less that Pence is remaking women’s health care as much as it is sending it back to the 1600s.” Bee also accused the Vice President of turning the Department of Health and Human Services into “his own personal Stepford Department” and described him as “the absolute scariest person to be calling the shots at this agency.” Pence’s voting record before joining the Trump administration appeared to horrify Bee most of all; she labeled him “one of the most radical anti-choice Congressmen ever to hold office.”

Eventually, the host began taking shots at the actual HHS Secretary, Alex Azar, for “revamping HHS’s Title X funding in order to strip Planned Parenthood of funding” and “pumping money into faith-based and abstinence organizations like Obria.” Bee made it clear she did not approve of Obria’s declaration that “reproductive decisions should prioritize the couple ‘as opposed to the needs and desires of the woman as an individual,’” responding to that line of thinking by reciting a slightly altered version of the left-wing, pro-choice slogan “my body, my choice.”

Citing the high number of people working at the Department of Health and Human Services with ties to the state of Indiana and/or Vice President Pence, Bee gleefully referred to HHS as “the Indiana mafia.” She proceeded to trash the team at HHS as “the most f***ed up group to come out of Indiana that wasn’t formed by Joe Jackson.”

The TBS host spent the rest of her monologue trashing a variety of initiatives spawned by HHS and the Trump administration, including the “Conscience and Religious Freedom Division.” Bee concluded that “Mike Pence doesn’t give a sh** that a godless President is disgracing his party because, if anything, it gives him the room and influence to do what he cares about most: gutting reproductive healthcare and protections for trans people.”

Bee’s pro-choice rant against the Department of Health and Human Services came just hours after CBS gleefully reported on the opening of a “ginormous” new Planned Parenthood facility in Missouri.  Regardless of which party controls the White House, the abortion lobby can always count on the supposedly “objective” media as well as liberals masquerading as comedians to go to bat for them.

SAMANTHA BEE: Welcome back to the show. It’s neat that Donald Trump might get impeached but if he actually gets pushed out of office, let’s remember who would take his place: this tall glass of creamed corn.

BEE: Trump has always been equal parts destructive and ineffective as President but Pence already knows how to use the powers of the executive branch. He’s already quietly changing how our country’s Department of Health and Human Services operates.

YASMEEN ABUTALEB: There’s been a big social conservative shift in the country’s health policy. What we found is Pence has played a quiet, behind-the-scenes role in making all that happen.

SARAH VARNEY: Vice President Mike Pence really making good on a promise that they campaigned on; which was to really remake women’s reproductive healthcare in the United States.

BEE: Yeah, it’s a bit less that Pence is remaking women’s healthcare as much as it is sending it back to the 1600s.

BEE: Vice President Pence has been quietly racking up the wins by turning Health and Human Services into his own personal Stepford Department, which is really troubling because H.H.S. is a huge organization. In fact, H.H.S. has more grant money than every other federal agency put together and somehow it now all goes to sweatshirts that say “Virginity Rocks!” Mike Pence is the absolute scariest person to be calling the shots at this agency. He’s also the absolute scariest person in any situation. As a reminder, Pence was one of the most radical anti-choice Congressmen ever to hold office. He’s basically dedicated his career to restricting family planning to the rhythm method; which, by the way, is also the name of his a cappella group. And a one, and a two, and a oh, I ejaculated, I’m sorry.

BEE: With Christ’s help, I’ll make it to three next time. As Congressman, Pence tried to amend the Constitution to ban same-sex marriage. As Governor of Indiana, Pence slow-walked a needle exchange program; which facilitated a massive HIV outbreak. He also passed a cruel and stupid law requiring funerals for fetuses and if you think that’s bad, it was even more disturbing when Pence went to all of them. So yes, Pence has had a devastating impact on health and human rights. As a politician, which no one could have seen coming back in ‘99 when he published an essay saying Disney’s “Mulan” sets a poor example because women in the military are a bad idea. Don’t get me wrong. I also disliked “Mulan,” but because it made me want to F a cartoon character. Not this guy, this guy.

BEE: Yes. But here’s the thing. Pence doesn’t even have to make these sweeping changes directly. He does it Hollywood style and just hires his friends. Pence’s most powerful hire is current H.H.S. Secretary and first Google image result for “business dad,” Alex Azar. Azar and Pence go way back to Indiana where Azar was a cartoonishly evil big pharma goon who was largely responsible for the price gouging of insulin. Pence almost made Azar his Lieutenant Governor and Azar has called Pence his friend and mentor at which point Pence said, “I’m sorry, I’m married.”

ALISON KOSIK: A new Trump administration rule says that clinics accepting Title X funds can talk to patients about abortion but they can’t refer women to an abortion provider or suggest where to get an abortion.

YAMICHE ALCINDOR: Abortion rights supporters called it a gag rule. While the decision is being appealed, Planned Parenthood officials say they will pull out of the program.

BEE: You know things are bad when Planned Parenthood’s only option is to pull out.

BEE: Now, over a million and a half low income women are at risk of losing access to affordable contraception and cancer screenings. Planned Parenthood’s already had to close two clinics in Ohio. It’s hard to believe these healthcare stories are real and I even believed that episode of Grey’s Anatomy where the dude had a bomb in his chest. Meanwhile, Azar is pumping money into faith-based and abstinence focused organizations like Obria, which says reproductive decisions should prioritize the couple “as opposed to the needs and desires of the woman as an individual.” Hey, how about this? I prioritize what to do with my body and if you’re feeling really left out, you can push a watermelon through a garden hose.

BEE: Azar is only one of at least a dozen H.H.S. staffers with direct ties to the Vice President or Indiana. In fact, there are now so many Hoosier connections in H.H.S., they’re collectively known as the Indiana mafia; which I’m guessing is the only mafia with a swear jar. That jar would be empty but Pence stubbed his toe once and said, “great snakes!”

BEE: So, what else has Pence’s Indiana mafia accomplished? Way too much, beginning with a whole new office.

DANA PERINO: Health and Human Services Department announcing a new division; one that will make it easier for doctors, nurses and other medical professionals to opt out of providing services that violate their religious beliefs.

DOUG MCKELWAY: This new division at H.H.S. called the “Conscience and Religious Freedom Division,” within its Office of Civil Rights.

ROGER SEVERINO: We are a nation of tolerance and that we will not allow people of faith to be bullied or targeted anymore.

BEE: Ah, yes, just like the Hippocratic oath states: first, do no homo.

BEE: This is really just scratching the surface. The H.H.S. has tried to create exemptions so employer provided insurance plans don’t have to cover birth control, effectively ended funding for fetal tissue research, canceled a scientific grant for contraception research and proposed a reversal of protections for transgender patients. He also completely overhauled x-ray machines to make them more decent. Pence’s influence goes beyond our borders, too. The U.S. has reinstated the Mexico City policy; which forbids any foreign nongovernmental groups that receive U.S. health aid from providing, referring or counseling on abortions. Every Republican President over the last 34 years has implemented this rule but Trump has expanded it so that it applies to almost all of U.S. global aid; including programs to fight HIV and malaria. It is, in effect, a global gag rule and we know it wasn’t Trump who masterminded this. When he heard global gag rule, he definitely thought it was a sex thing.

BEE: Mike Pence doesn’t give a shit that a godless President is disgracing his party because if anything, it gives him the room and influence to do what he cares about most: gutting reproductive healthcare and protections for trans people. But unlike Trump, Pence isn’t doing this just to satisfy a base. He’s a true believer. So, I guess you could say he’s doing this to satisfy himself. Oh, boy. Mother does not like the sound of that. We’ll be right back.

Help fight back against the media’s impeachment crusade.