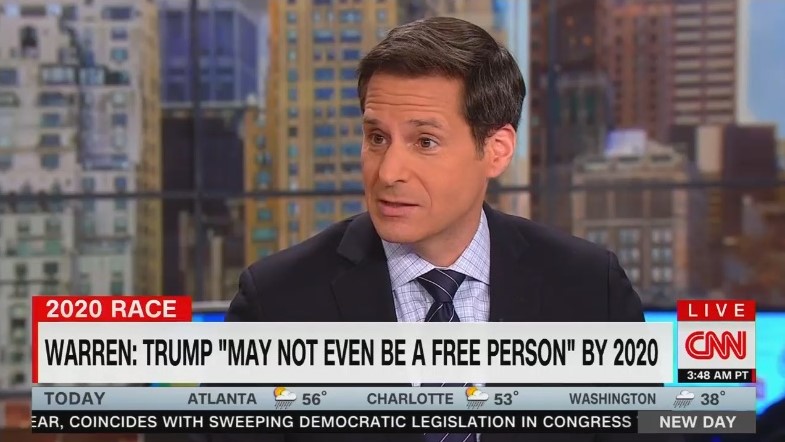 On Monday's New Day, CNN co-hosts John Berman and Alisyn Camerota discussed the 2020 campaign with political reporter MJ Lee and CNN analyst Harry Enten. The conversation specifically focused on the latest Democrats to enter the race, Senator Elizabeth Warren and Senator Amy Klobuchar. Not surprisingly, it did not take long for the conversation to devolve into accusations of racism against President Trump.

The discussion began with the panelists reacting to a clip of Warren suggesting that “by the time we get to 2020, Donald Trump may not even be President” and that “he may not even be a free person.” Was that character assassination? Is there any real evidence that will happen? Who cares? The screen during the segment highlighted that attack.

After Lee talked about how bringing up President Trump is not in keeping with Warren’s campaign strategy so far, Camerota suggested that one of President Trump’s tweets may have prompted her to go after the President. Camerota read aloud a tweet sent out by President Trump on Saturday, a day before Warren made these "free person" remarks at an event in Cedar Rapids, Iowa. In the tweet, President Trump asked if Warren would run as the first Native American Presidential candidate and concluded by saying “see you on the campaign TRAIL, Liz!” 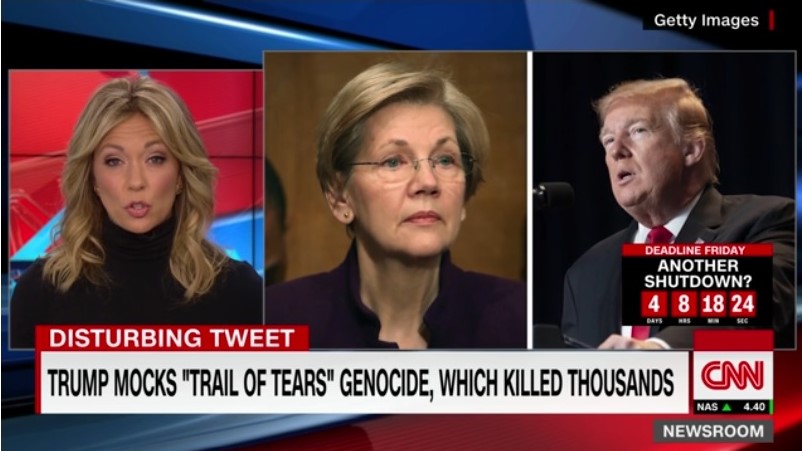 Berman proceeded to describe the tweet as “flat out racist.” Enten agreed, almost echoing the words “flat out racist” simultaneously with Berman. Enten, Berman, and everyone else in the media appear to have developed a “sixth sense” that enables them to see racism where no one else living outside the media bubble does.

Enten himself has made some comments on CNN in recent months that might actually meet the description of “flat out racist.” Late last year, Enten unveiled his“2020 Power Rankings for Potential Dem Contenders.” He ranked Ohio Senator Sherrod Brown at number eight, dismissing him as “another white male,” adding “going into a Democratic primary with women doing well, I’m not sure it’s time to nominate another white man.” Suggesting someone lacks the qualifications to do a job because of their skin color definitely comes across as “flat out racist.” Even when you're a white male.

Flashing forward to this week, Enten suggested that “Elizabeth Warren said enough is enough. If the President is going to go after me and a subset of people, then you have to respond in kind.” President Trump did not go after “a subset of people,” no evidence exists that he was referencing the Trail of Tears at all. President Trump’s references to Warren’s “Native American heritage” simply calls her out for lying about using her minority status to get ahead; a job the media will not do.

A transcript of the relevant portion of Monday’s edition of New Day is below. Click “expand” to read more.

JOHN BERMAN: New entries into the race for president and a new line of attack from Senator Elizabeth Warren.

SENATOR ELIZABETH WARREN: By the time we get to 2020, Donald Trump may not even be President.

WARREN: In fact, he may not even be a free person.

BERMAN: All right, joining us now to discuss, Harry Enten and MJ Lee, CNN National Politics Reporter. She is in Iowa traveling with Elizabeth Warren, chasing her around the country. And MJ, you wore there for that comment from Elizabeth Warren, which actually needs some context. It’s interesting because she’s been going out of her way not to respond to every statement or tweet from the President of the United States. Then all of a sudden she comes out with this, which is, you know, nuclear. The President might be in jail by 2020.

MJ LEE: That’s right. I can tell you, John, when Warren made those comments yesterday in Cedar Rapids, you could see the reporters sitting up in their seats because it is so rare that she goes after Trump by name. And I think, in fact, since she announced her exploratory campaign about a month ago, she’s really only brought up Trump if she has really had to because she gets asked about him explicitly by a voter or a reporter. So it was clear that she sort of walked into that room with the plan to make this specific comment about Trump. But I think you’re right, that there is this bigger point that she really wanted to make, which is that this is not going to be the Warren that we see on the trail every day. She does not want to be throwing punches at Trump every single day or responding to every one of…every single one of his tweets or his attacks. And, in fact, she was kind of calling on her fellow Democrats too, to not let the President sort of set the conversation and set the agenda for them because she said there’s too much else that we need to be talking about and otherwise we are not going to sort of get our message across and set the conversation to our own terms.

ALISYN CAMEROTA: Yeah, it’s interesting, because, I mean, that’s a different strategy. So do you ignore the President or do you engage with the President? So over the weekend, President Trump put out this tweet about Elizabeth Warren. “Today Elizabeth Warren, sometimes referred to me by…as Pocahontas, joined the race for President. Will she run as our first Native American presidential candidate, or has she decided that after 32 years, that this is not playing so well any more? See you on the campaign…capitalized, TRAIL, Liz!” So, you know, you have to decide if you’re going to rebut that or ignore that.

HARRY ENTEN: I mean, look, a lot of people saw that as an allusion to the Trail of Tears.

BERMAN: It was an allusion to the Trail of Tears.

BERMAN: There’s no other way to look at it.

BERMAN: Which is flat out racist.

ENTEN: Flat out racist. Yeah, it is. And so I think that Elizabeth Warren said enough is enough. If the President is going to go after me and go after a subset of people, then you have to respond in kind. And I think while Democrats don’t want President Trump to be their only focus, at the end of the day, if he is going to make statements such as those, then Democrats are going to want a fighter to fight back because even if in the primary you’re just going up against individual…your own, your own party, eventually the main prize is going up against the President of the United States. So you have to show that you’re able to push back.