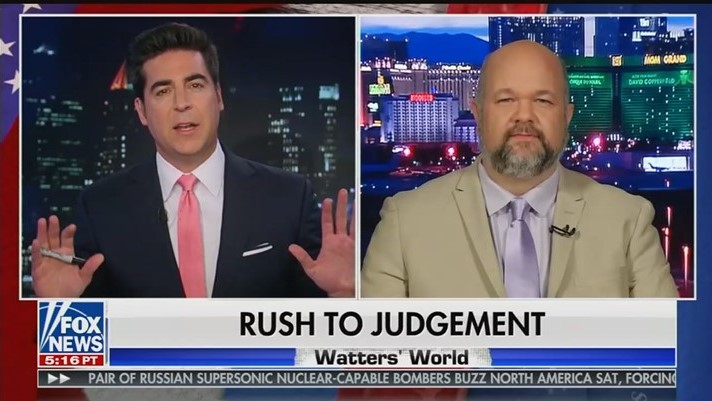 During Saturday’s edition of Watters’ World, Fox News host Jesse Watters brought up a glaring double standard when it comes to the media’s treatment of children: “Remember the Parkland shooter situation where everybody was going after the students and people immediately said you cannot go after students, you cannot say anything about students, they’re minors?”

Watters interviewed Robert Barnes, the attorney representing several of the Covington kids and their families. Barnes went through a list of people and media organizations he was thinking of suing for refusing to retract slanderous statements about the teenagers; including Maggie Haberman of The New York Times, former CNN host Reza Aslan, Matthew Dowd of ABC News, actor Michael Rapaport, and The New York Daily News.

Looking back at the media activism in the wake of the Parkland shooting, Watters definitely has a point. The media rushed to the defense of Douglas High School student David Hogg, who used his platform in the weeks following the mass shooting to push for gun control, when Fox News host Laura Ingraham sent out a tweet making light of a few colleges rejecting Hogg. CNN host Alisyn Camerota gave Hogg a platform to declare war on Ingraham by highlighting his successful attempts to convince advertisers to boycott her show in the wake of her controversial comment; which she ultimately apologized for. Despite the best efforts of the networks to buoy Hogg’s boycott campaign, viewership of Ingraham’s primetime show rose by 20 percent during the course of the boycott.

The media’s treatment of the Parkland students turned gun control activists, whom Camerota dubbed “influential voices,” stands in stark contrast to their treatment of the Covington kids; whom they described as “racist” and equated with Neo-Nazis and segregationists. As Watters pointed out during his aside on media bias, “it seems like all minors should be off limits.” For most of the media, that sacroscanct rule only seems to apply to minors who support progressive causes; such as gun control.  When it comes to minors who support conservative causes, such as the pro-life movement, not only are the kids themselves not “off-limits,” their schools become target of left-wing media activist movements such as #ExposeChristianSchools.  The media’s treatment of the Covington kids proves that it might be time to start a new hashtag: #ExposetheMainstreamMedia.

A transcript of the relevant portion of Saturday’s edition of Watters’ World is below. Click “expand” to read more.

JESSE WATTERS: All right, here with more, Robert Barnes, an attorney representing several students and families from Covington Christian High School. All right, Mr. Barnes, there’s been some really, really horrible things said about these boys from Covington. Have you issued any warning to these people that have been trafficking in a lot of this slanderous activity on the internet?

ROBERT BARNES: Yes, to a wide range of people. So, Maggie Haberman is one of the first people who was calling for the kids’ expulsion.

BARNES: You had the lead New York Times reporter, making false statements about these kids, calling for punitive action against these kids, whom she’s never met, who are private citizens, based on an event she didn’t even witness. It really tells you something about the standard of the New York Times that something like that could happen. But also others, Congresswoman Omar made false statements about these kids. We requested that she retract it or we would sue her. An hour later, she did retract it; to her credit. But others have not retracted. So some have; Kathy Griffin has, Jake Tapper has.

WATTERS: Oh. You got Kathy Griffin to retract?

WATTERS: That’s a big…that’s a big retraction, she often times does not retract. I see someone, Reza Aslan, this guy has appeared on The Daily Show, on CNN a lot, here’s what he said. He said, “Honest question. Have you ever seen a more punchable face than this kid’s?”  He has not retracted that.

BARNES: That’s correct, and he’s going to get sued next week.

BARNES: Similarly, Matthew Dowd, there’s been a request that he retract. He’s re…he’s an ABC commentator, pretends to be a Republican commentator, he’s made false statements about these kids, refused to retract it and he did it interspersing it with statements about how we should love each other consistent with the Christian tradition. If he doesn’t retract, he’s going to get sued. Michael Rapaport did a crude, a rap sort of image against these kids. He’s refused to retract, he’s a famous Hollywood actor that’s on a Netflix show about how we should avoid childhood bullying of kids, and here he is bullying kids.

BARNES: So, several…New York Daily News put a false headline out that various kids from the school had appeared in black face; totally false. They’ve been at a black out, which is very common throughout the country at high school basketball games.

WATTERS: Are you going to go after The New York Daily News for that?

BARNES: They are going to get sued.

WATTERS: Oh, they are going to get sued.

WATTERS: So everyone’s getting sued, it seems like. Now, from my limited understanding of the law, I did not go to law school, it’s a very high bar, the slander and the libel. I mean, you have to show malicious intent, knowingly that something is wrong and defamatory and it doesn’t always work in court. Are you confident that you are going to be able to secure judgments?

BARNES: Yes because in this case there is a unique exception so when there is a defamation and libel of private citizens, particularly minors, then the legal standard goes way down.

BARNES: So you no longer have to prove actual malice or malevolent intent. All you have to prove is that a false statement was made or in Kentucky, the law is even broader; an unflattering impression given to put a person’s reputation in a false light. And otherwise, and just that it be negligent for them to do so. That’s why the whole family gave everybody 48 hours to correct all of these statements. If they still refuse do so, it’s clearly negligent for them to keep false statements out.

WATTERS: Now, you know what strikes me as amazing? Remember the Parkland shooter situation, where everybody was going after the students and people immediately said you cannot go after students, you cannot say anything about students, they’re minors. Yet you had the entire mainstream media establishment and celebrities descend on these high school students, smearing them, calling them racist, digging into their backgrounds, digging into the school and no one said anything. Huge double standard. It seems like all minors should be off limits. You have spoken to these kids; I know you are in regular discussion. What, what are their spirits like?  Because I know going forward, I mean, they could have potential problems with college admissions, with their resumes. You know, their online profiles are permanently damaged as a result of this. How are they doing?

BARNES: It’s been brutal. They, they described it as complete hell. They described it as one of the most difficult weeks they’ve ever lived in their lives. These are kids who have, they have been told they can’t use social media, they are being subjected to internal investigations to cover up for the failure of other people to properly identify this at the…in the school authority system. So, they have been through one of the most difficult, you know, they went to D.C. to participate in one of our greatest political traditions, expressing their political viewpoint and instead they get ambushed by lefty agitator provocateur advocates who then lie about them. But that wasn’t the worst part. The worst part was some of the most institutionally powerful people in the establishment press lied and defamed them and it could destroy their careers, it could destroy their reputations, it could destroy their futures, and it’s made their current life a living hell.

WATTERS: Well, I’m glad there’s some accountability because if there’s no accountability, it’s going to continue to happen. Robert, thanks very much and keep us posted on the lawsuits, I mean, if you don’t even win, at least you’re going to grind them to dust in legal fees. I appreciate you coming on.

BARNES: Yeah, the goal is to send a message that they’ll remember.