Listen to the liberal media, and you’d be very, very impressed that President Biden has nominated a “historic” Cabinet with “vast experience,” “expertise and diversity,” “the most diverse collection of men and women to ever advise a President.” It’s practically the only analysis that you’ve heard about these incoming bureaucrats on broadcast and cable news over the past two months:

With all of the media’s fixation on race, gender and sexual orientation, you might never know that the group would also form perhaps the most left-wing Cabinet in U.S. history. The MRC analyzed all coverage of Biden’s Cabinet selections on the ABC, CBS and NBC evening newscasts from November 7 through January 19 (including weekends). While journalists ritually applauded various appointments as the “first” woman, Hispanic, African American, Native American or gay person in various roles, there were just two references — one each on ABC and CBS — of any of these individuals being “liberal” or “progressive.”

The American Conservative Union (ACU) ranks every member of Congress on a scale of zero to 100, where 100% is achieved with a perfect conservative voting record. Of the five Biden appointees with a congressional record, none scored higher than six, putting them on the far edge of the liberal side of the ledger, yet none were tagged as “liberal” by network reporters.

The most liberal, at least according to the ACU: New Vice President Kamala Harris, whose lifetime rating was 3.03% as of the most recent rankings. That makes Biden, who left the Senate after 2008, seem almost moderate with a 12.67% lifetime score for his 35 years of service. 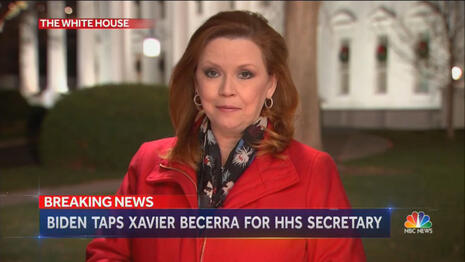 Becerra, who left Congress four years ago to become California’s Attorney General, went to court to force a group of nuns to pay for abortion and birth control in violation of their conscience. ABC and CBS didn’t bother mentioning this aspect of his career, while NBC’s Kelly O’Donnell on December 6 vaguely described Becerra as merely “leading a lot of the litigation to protect Obamacare.”

The only liberal labels were assigned to Biden’s pick to head the Office of Management and Budget, Neera Tanden, as both ABC and CBS noted that she “leads a liberal think tank,” the Center for American Progress. But ABC’s Mary Bruce (November 30) first touted how Tanden “could be the first woman of color” to head OMB, while CBS’s Ed O’Keefe (December 1) sympathetically relayed how Tanden’s “immigrant mother from India relied for a time on federally subsidized housing and food stamps.”

Over on NBC (also December 1), reporter Peter Alexander eschewed any label for Tanden, instead setting her up as in the middle between two extremes: “Tanden, who would need to be confirmed by the Senate, is already facing criticism from Republicans and some progressive Democrats for her outspoken views.”

Viewers were far more likely to hear Biden’s choices touted as “historic,” as when ABC’s Martha Raddatz on December 8 saluted General Lloyd Austin, the pick to run the Defense Department, as having “a life that could propel him into the history books.”

Earlier, on November 23, ABC’s Raddatz had also enthused that Biden’s “nominees have vast experience,” while on December 19 NBC’s Kelly O’Donnell praised the selection of a “climate team emphasizing expertise and diversity.”

CBS’s O’Keefe on December 1 hailed how “the incoming economic team stands out for its diversity,” then ten days later described Biden’s nominees as “the most diverse collection of men and women to ever advise a President.”

It’s obvious that, as far as the media are concerned, the Trump era is clearly over. So don’t expect any of the gratuitous nastiness that accompanied virtually all coverage of both the last President and his Cabinet.