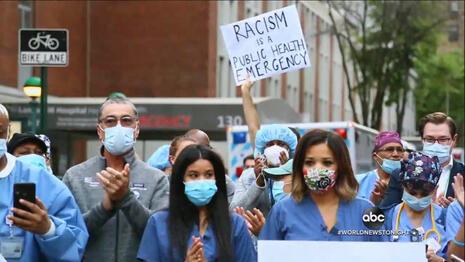 For nearly three months, from early March to late May, the coronavirus pandemic eclipsed all other news stories, consuming nearly all of the airtime on the Big Three (ABC, CBS and NBC) evening newscasts. But for two weeks in late May and early June, those same networks put the virus story on the back burner while they diverted nearly all of their coverage to nationwide protests against police brutality.

And now that the protests have subsided, TV news is once again ramping up its coronavirus coverage. Yet those newscasts’ revived sense of urgency is undermined by their two-week late spring break from the pandemic. (Related: VIDEO: Media Hypocrites Loved Protests, But Declare Trump’s Rallies ‘Dangerous’)

Media Research Center analysts reviewed all broadcast evening news coverage of the coronavirus outbreak for five months (including weekends), from the first reports on January 17 through June 16.

Coverage unfolded in four distinct phases: From January 17 through March 8, the coronavirus was given steady coverage alongside the other news of the day. Much of this coverage focused on developments in foreign countries (China, then Italy), or affecting Americans on cruise ships. In a 52-day period, the evening newscasts generated 570 minutes of coverage, or roughly 11 minutes per night (all three newscasts combined).

Starting March 9, however, the virus story took over the newscasts, eclipsing nearly everything else. From March 9 through May 28, these networks pumped out 3,896 minutes of coronavirus news, or about 48 minutes per night (approximately 88% of all available airtime, excluding commercials and teases). This includes all facets of the story: the situation in major cities; the economic damage; and inspiring stories of individuals who beat the virus.

This heavy coverage sent the not-so-subtle signal that the coronavirus was an emergency situation, requiring the full attention of the public as well as government officials at all levels.

Then came the protests — obvious news which plainly deserved a share of evening news airtime. But for two weeks (from May 29 through June 11), the networks did what they hadn’t done for months: put the virus story on hold. Over those 14 days, ABC, CBS and NBC jointly produced 137 minutes of coronavirus coverage, about 10 minutes per night. That’s a 79% drop in airtime from the March-May average, and even less than what they were generating during the earliest days of the pandemic.

The low point came on June 4, the three evening newscasts combined aired less than two and a half minutes of coronavirus news, the smallest total since January 19 (95 seconds), when both CBS and NBC were pre-empted on the East Coast for live sports (remember that?). The new signal: racism and police misconduct now require all of our attention, and the virus can wait for another day.

NBC correspondent Blayne Alexander essentially said as much in a May 29 report for Nightly News: “Gathering in the midst of a pandemic, protesters say they are now forced to fight a different virus: racism.” Four days later, ABC’s David Muir enthused over New York City hospital workers showing solidarity with the protesters, even reading from a sign: “Racism is a public health emergency.”

Yet the virus took no hiatus during any of this. From May 29 through June 11, there were more than 300,000 newly-confirmed cases of the coronavirus in the United States, and more than 12,400 deaths, according to statistics compiled since the start of the pandemic by Worldometers.com.

The networks began their post-protest phase of coverage on June 12, quickly doubling the average nightly airtime devoted to the pandemic to more than 20 minutes per night. This new phase of coverage includes warnings of rising cases in many U.S. states, and of as many as 200,000 deaths by the fall.

But if the networks begin clamoring for more punitive lockdowns, audiences will remember that the media themselves decided that virus concerns could be set aside for a two-week protest.