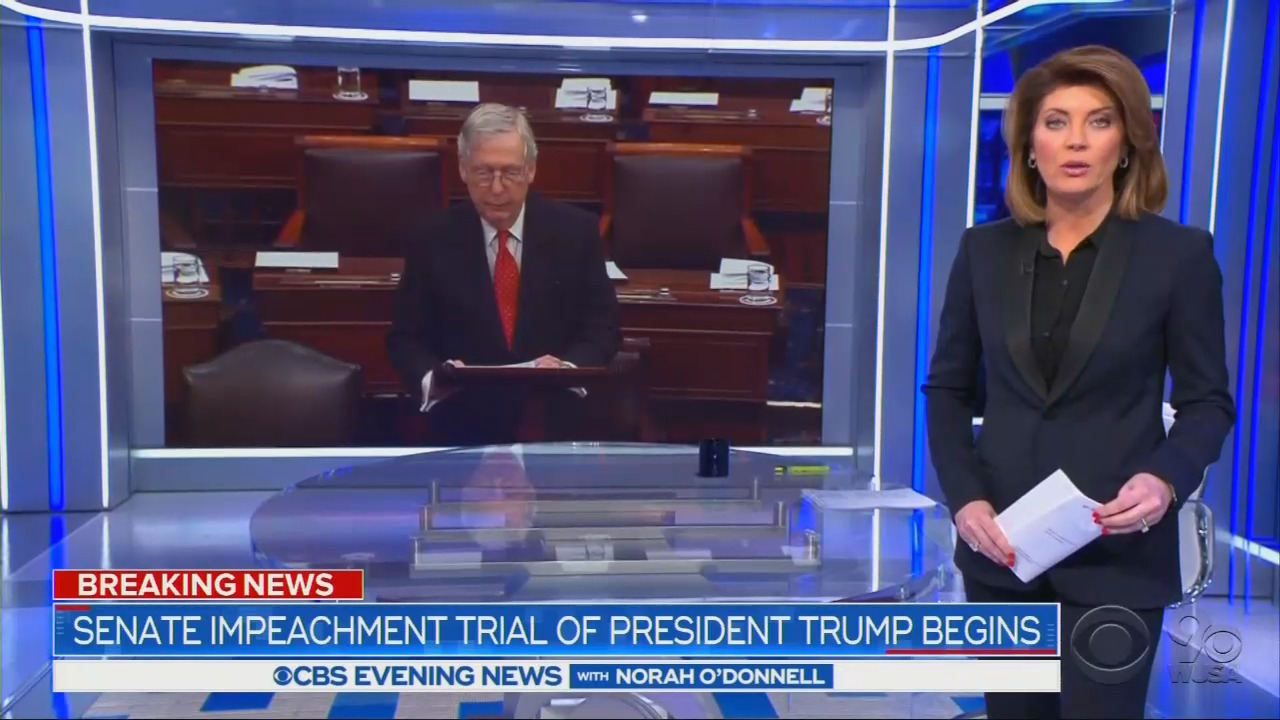 Tonight, President Trump delivers his State of the Union address, a speech traditionally packed with the policy initiatives that the administration plans for the upcoming year. The switch to substance ought to be a refreshing break for TV viewers, who’ve been force-fed a diet of seemingly endless impeachment news for the past 130 days.

According to a new MRC study, for each minute the broadcast evening newscasts spent talking about the President’s successful economic programs, viewers heard 77 minutes about the Democrats’ impeachment push, a massive disparity. Overall, coverage of the President was 93% negative during the last four months, reaching 95% negative in January 2020.

Details: Media Research Center analysts examined all 1,776 minutes of Trump administration coverage produced on the ABC, CBS and NBC evening newscasts since the formal launch of the impeachment investigation on September 24, through the Senate vote against additional witnesses on January 31.

The vast majority of this airtime (1,082 minutes, or 61%) was spent on the Democrats’ ultimately futile impeachment probe, which is scheduled to culminate in an acquittal vote Wednesday afternoon. Only twice during these four months did the networks permit policy to dominate the newscasts — and both times, reporters and anchors cast it in heavily negative terms for the administration.

The top policy topic during these months was the U.S. showdown with Iran following the killing of their Quds Force commander, General Qasem Soleimani, which drew 197 minutes of evening news airtime in January, nearly all of which (96%) was critical of the administration.

The President’s decision to pull troops out of northern Syria in October was the second-most covered topic (126 minutes), and was even more one-sided — evening news viewers were treated to 99 percent negative coverage of his Syria pull-out. (See below for methodology.)

On the other hand, the administration’s economic policies were collectively given mostly (82%) positive coverage on the evening broadcasts. But the network coverage of these topics was so minuscule, viewers might have barely noticed the good news.

That dearth of coverage of good news topics, plus heavy negative coverage of other policy topics as well as impeachment, makes it easy to see why overall coverage of President Trump has averaged 93% negative during these past four months (95% negative in January).

According to Gallup, Americans right now are more satisfied with the way things are going in the U.S. than at any point in the past 15 years, while confidence in the economy is at its highest since 2000. Imagine how those numbers would look if the networks gave the President’s economic achievements the attention they deserve.

And, in case you were wondering — the evening newscasts didn’t spare any seconds for those important Gallup results, either.

Methodology: To determine the spin of news coverage, our analysts tallied all explicitly evaluative statements about President Trump and his administration from either reporters, anchors or non-partisan sources such as experts or voters. Evaluations from partisan sources, as well as neutral statements, were not included.)