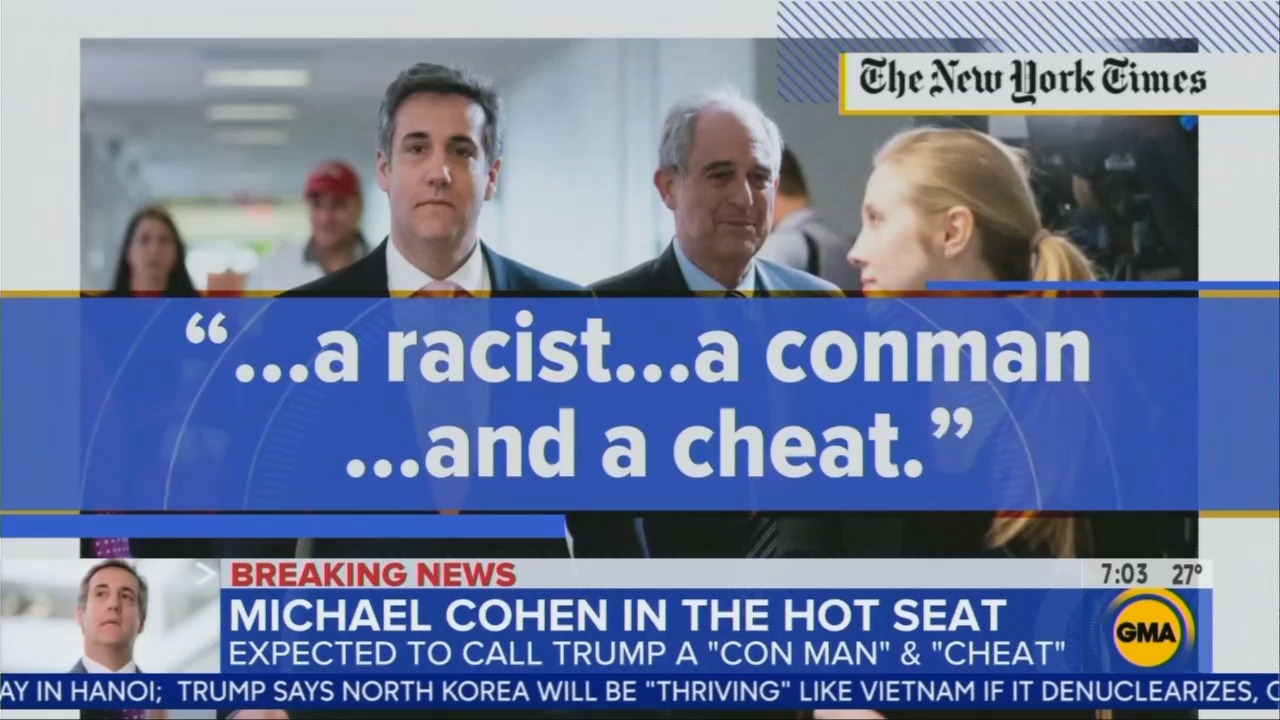 On ABC’s Good Morning America, co-host George Stephanopoulos framed today’s congressional testimony from ex-Trump lawyer Michael Cohen not as a case of an admitted liar potentially seeking to avoid the consequences of his crimes, but as an “epic,” “historic,” “Watergate”-style showdown, with Cohen playing the role of Nixon White House whistleblower John Dean.

Twice on Wednesday’s program, Stephanopoulos cited Dean as the most recent example of such testimony. “The last time Congress heard testimony like this, more than four decades ago, when President Nixon’s lawyer John Dean implicated Nixon in the crimes of Watergate,” Stephanopoulos gravely noted at 7am ET.

An hour later, he repeated his supposed insight, but botched the name of the President: “Really the last time we saw anything like it was when John Dean testified against President Trump back in 1973.”

Soon after, MRC senior analyst Kyle Drennen caught how NBC’s Al Roker seemed to pick up on Stephanopoulos’s theme during the Today show’s preview of the hearing: “People have likened him to John Dean. It could be interesting.”

ABC correspondent Mary Bruce seemed to validate all of Stephanopoulos’s hopes: “For the first time publicly, Cohen will accuse the President of criminal conduct while in office. The President’s former lawyer and fixer intends to deliver a scathing opening statement calling Trump “a racist, a con man and a cheat.”

But a few minutes later, legal analyst Dan Abrams countered virtually all of the potential crimes Bruce and Stephanopoulos listed, suggesting Cohen’s claims about Trump knowing about WikiLeaks could be seen as “embarrassing...but not necessarily criminal.” The alleged “hush money” payments, for which Cohen is facing jail time, could be explained by Trump as “to protect my wife, this had nothing to do with the campaign.”

And Abrams pointed out that Cohen’s prepared testimony admitted that his lies to Congress about the Moscow Trump Tower project were not ordered by the President: “He does say in there that he was not instructed to lie to Congress. He says that’s not the way Donald Trump worked, and he says it was actually more subtle than that.”

In spite of all of this, Wednesday’s Good Morning America devoted significantly more airtime to the Cohen soap opera (9 minutes, 40 seconds) than to the breaking news about Trump’s summit meeting with North Korean dictator Kim Jong-Un about nuclear disarmament (6 minutes, 6 seconds). So you can see their priorities.

Here’s the transcript of the conversation between Stephanopoulos and Abrams on the February 27 Good Morning America (click “expand” to read):

STEPHANOPOULOS: Let’s start out, this new charge where he says he was in the room when Roger Stone told the President about WikiLeaks’ Julian Assange.

DAN ABRAMS Alright, so let’s separate out illegality from lies, potentially embarrassing information. I mean, I think that’s what you have to separate out as you’re watching Michael Cohen’s testimony here. This one falls into the ‘if what Michael Cohen is saying is true, it is embarrassing.’ It shows that the president was not telling the truth, but not necessarily criminal. Why? Because here you’re just talking about contacts with WikiLeaks, not with regard to the hack itself that the Russians did, not coordination with the Russians themselves but potentially getting advance information from WikiLeaks about what they were doing with the information they had received from the Russians. 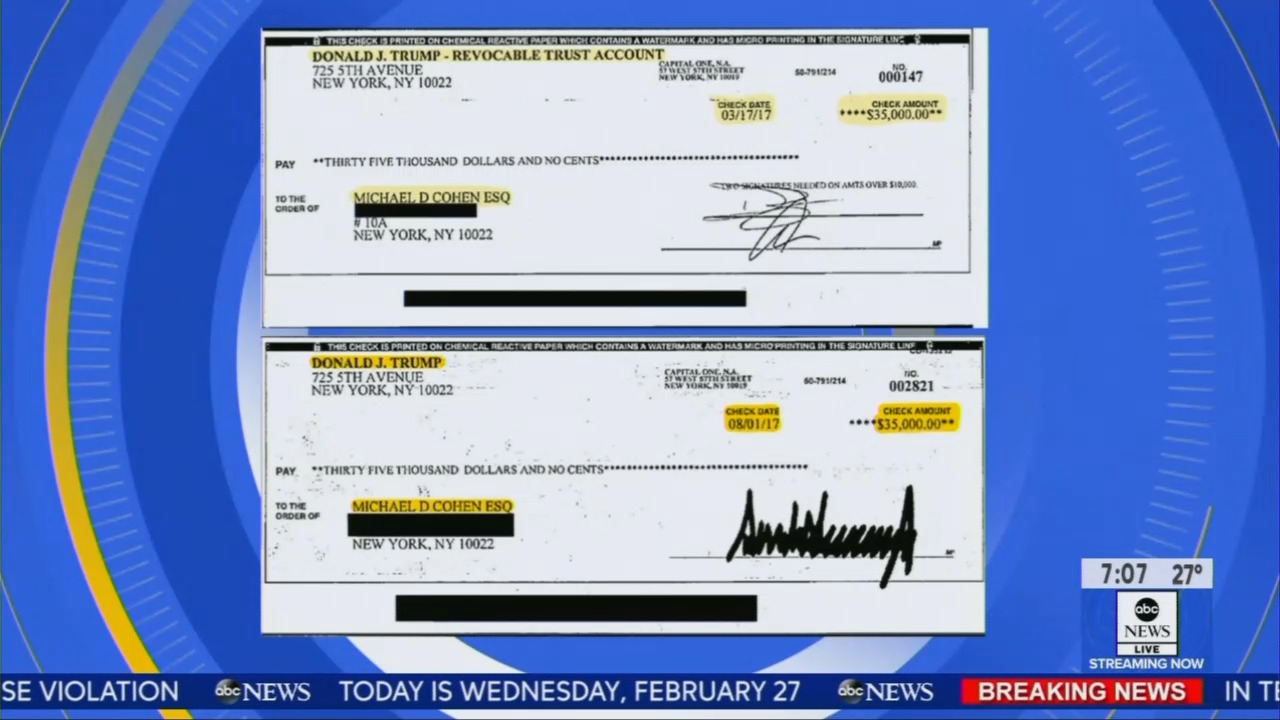 STEPHANOPOULOS: What could be evidence of a crime, these checks. Let’s put the check up on the screen right now. This check, August 1st, 2017, the president is in the oval office at this time, $35,000 check to Michael Cohen. They say this is evidence that he was part of a conspiracy.

ABRAMS: Right, so here if they can show that the President knew that this was reimbursement for the payoff to Stormy Daniels, and that it was intended to influence the campaign, and that remains the critical question there, because the defense could be, ‘yes, I knew that this was a payoff, but this was to protect my wife, this had nothing to do with the campaign, et cetera,’ but it is definitely dangerous business now that you have the signed check.

STEPHANOPOULOS: And the second check signed by Don, Jr., and the CFO of the Trump Organization.

ABRAMS: Right, so now you’ve got a separate question with regard to, for example, Don, Jr. Is there a possible conspiracy charge with regard to violating campaign finance laws? Remember, he’s not protected the way the President is from being indicted while in office. That’s another avenue that we have to look at here, is are other people possibly going to get charged as a result of what Michael Cohen is saying.

STEPHANOPOULOS: And, remember the Southern District prosecutors have said that already it’s a matter of fact that the President directed this.

STEPHANOPOULOS: And finally, we also hear Michael Cohen explain why he lied to the Congress about Trump Tower Moscow.

ABRAMS: Well, he says, obviously, he lied for the President, that he was trying to cover up for him because they didn’t want the public to know. But he does say in there that he was not instructed to lie to Dongress. He says that’s not the way Donald Trump worked, and he says it was actually more subtle than that.

STEPHANOPOULOS: Dan Abrams, thanks very much.