Where Are Media Demands for Democrats to Cooperate With Trump?

Democrats take control of the House of Representatives today, but you don’t hear journalists instructing them to “show that they can govern” by finding ways to “compromise” with President Trump, as you do when Republicans are poised to gain power. Instead, cable news outlets are eagerly anticipating a year of investigations designed to damage Trump and put Republicans on the defensive in 2020.

On the New Year’s Eve edition of MSNBC’s The Last Word, for example, host Lawrence O’Donnell touted gridlock as a worthy objective: “The Democrats’ number one job in the House of Representatives is to stop every single thing that Donald Trump wants. But the press isn’t going to give them any credit for that because that will be called gridlock.”

That’s never the media’s message when the voters put Republicans in charge of one or both houses of Congress to put the brakes on a Democratic president. Back on November 8, 1994, for example, after voters ended Democrats’ 40 years of control of the House, CNN political analyst Bill Schneider said it was really “a vote for bipartisanship, for centrism.”

A few days later, NBC’s Tim Russert also preached cooperation with Democratic President Bill Clinton, opining on the November 13, 1994 Today show that “if the Republicans govern only from the right and abandon the center, my guess is the public will pay them back in the very near future.”

You heard the same spin after 2010, when Republicans took over the House of Representatives. On the January 1, 2011 CBS Evening News, correspondent Bob Orr argued that Republicans needed to find ways to work with President Barack Obama: “The political reality is the new GOP reformers can’t do anything alone.”

Orr’s story included a soundbite from Politico’s David Mark: “[Republicans] will have an incentive to compromise, to show they can govern, that they’re not just the party of no.”

The media churned out identical advice after Republicans picked up the Senate four years later. “Opposing the President is not a policy,” NBC’s Matt Lauer lectured New Jersey Governor Chris Christie on the November 5, 2014 Today. He demanded: “Tell me, specifically, one area where you would like this new Republican majority to compromise — real compromise — with President Obama.”

This week, news anchors aren’t badgering Democrats to compromise with President Trump. In fact, they’ve been applauding how, “after two years of holding back,” Democrats are finally “fighting” with the President. And even though journalists derided Republican investigations into Obama-era scandals like Benghazi as a “witch hunt,” the media are gleefully anticipating how House Democrats will step up the pressure on Trump.

But that’s also how the media greeted the Democratic takeover of Congress in January 2007, with some journalists agitating for impeachment hearings into the last Republican president’s supposed “crimes.” 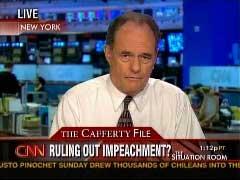 Twelve years ago, CNN’s Jack Cafferty wanted action. In his December 11, 2006 commentary on The Situation Room, he asked viewers to weigh in: “Is it wrong for the incoming Congress to simply rule out the impeachment of President Bush?” Then on January 4, 2007, he kept up his complaints: “If the Democratic Party refuses to confront this administration in a meaningful way on the issues that are threatening the very survival of our nation, then they’re no better than the people committing these crimes.”

Keep that in mind as you hear journalists suggest that it’s the once-in-a-lifetime circumstances posed by Donald Trump that will justify Democrats strategy of gridlock, investigations and potential impeachment. These same news organizations were also beating the drums of impeachment for a different Republican president in a very different situation — yet were outraged when Republicans attempted to check the power of Democratic presidents.