Study: CNN Is Completely Obsessed With Donald Trump — and Not in a Good Way 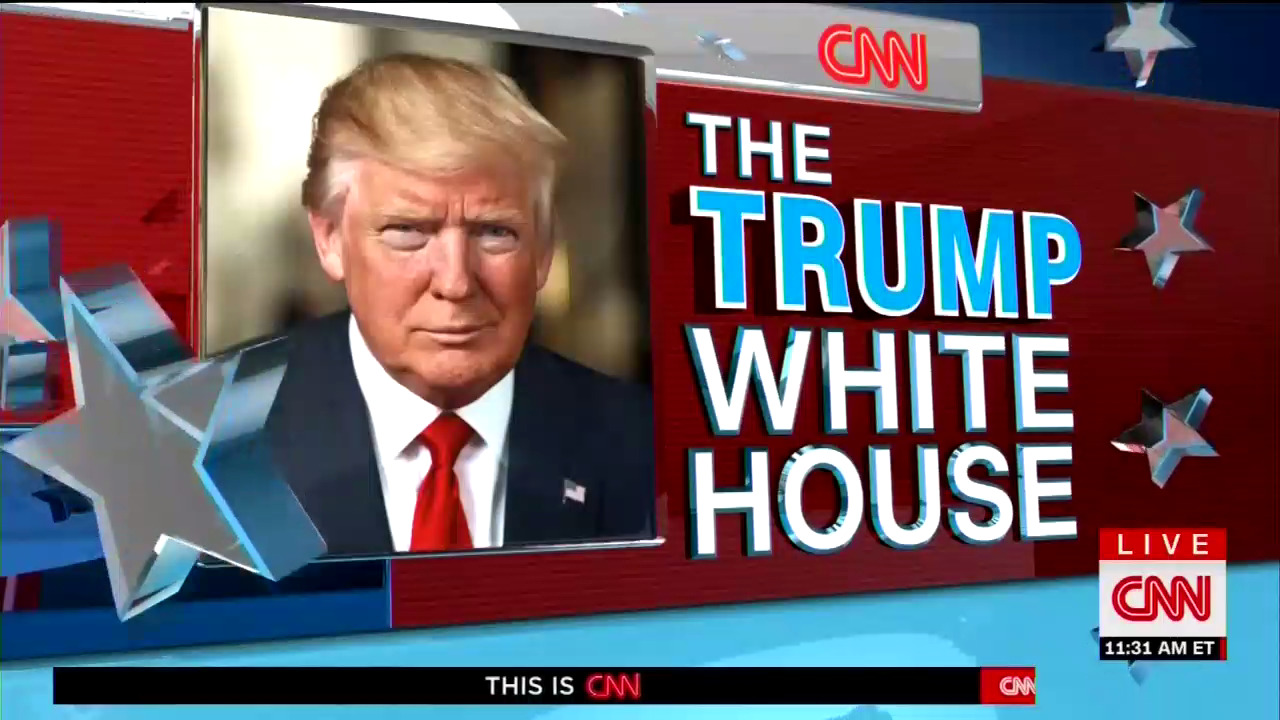 CNN claims it’s right down the middle, somewhere between the left-wing MSNBC and the more conservative-friendly Fox News Channel. But an MRC study of an entire day of CNN’s coverage shows the network spent almost all of its time covering the Trump presidency, with a heavily skewed roster of anti-Trump guests and on-air commentators.

To get a handle on CNN’s news priorities during the Trump era, a team of MRC analysts reviewed all of the cable network’s programming on Friday, May 12, starting with the 4am ET Early Start and continuing through the 11pm ET CNN Tonight with Don Lemon, a total of 20 hours of material.

After excluding commercials, teases and promos, our analysts found 13 hours, 27 minutes of actual news coverage, an average of just over 40 minutes per hour. Of that, a whopping 92 percent (12 hours, 19 minutes) was devoted to the Trump presidency, with a mere 68 minutes — a little more than three minutes per hour — devoted to all of the other news of the day.

With the exception of about 21 minutes of live coverage of a White House briefing about the President’s upcoming trip to the Middle East and a smattering of coverage of Melissa McCarthy’s parody of White House Press Secretary Sean Spicer in an upcoming SNL appearance, CNN used that time to endlessly analyze the President’s firing of FBI Director James Comey, then a three-day-old story. 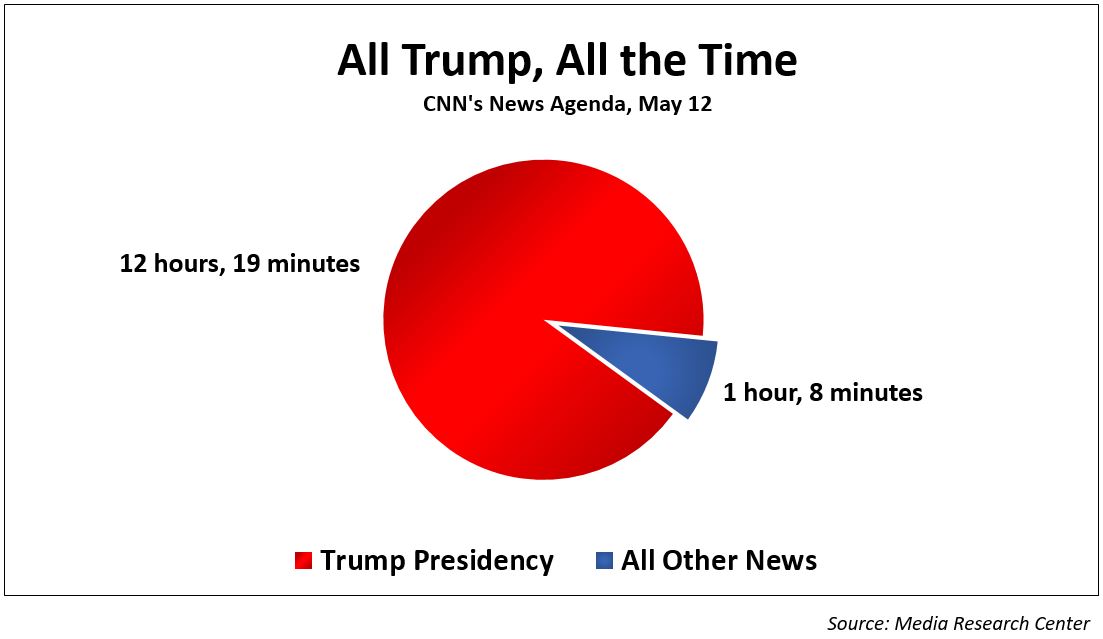 Much of that airtime consisted of interviews and panel discussions giving their assessment of Trump. MRC tallied 123 appearances by guests or panelists over the course of the day. Many of CNN’s analysts showed up in multiple newscasts, each of which would count as a separate appearance. (There were 77 unique appearances by people identified as CNN analysts or commentators, or 62% of all guests).

The vast majority of all of CNN’s guests that day (96, or 78% of the total) were Trump critics, compared to a handful of pro-Trump guests (just seven, or 6% of the total). Another 13 guests were neutral, and seven offered mixed assessments of the administration. 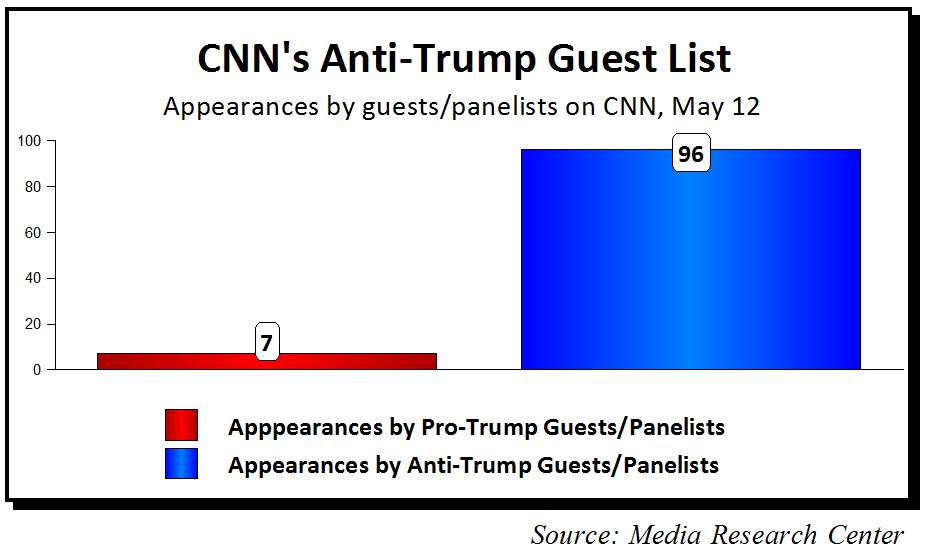 Looking just at CNN’s own on-air talent, the results were even more tilted, with 69 appearances by anti-Trump analysts, vs. just two for pro-Trump analysts — CNN political commentator Paris Dennard, who appeared during the latter half of the 3:00pm ET hour, and CNN political commentator Jason Miller, a former Trump campaign aide, who appeared in the 8pm ET hour of Anderson Cooper 360.

CNN counter-terrorism analyst Phil Mudd, for example, harshly condemned the President during appearances in the 6am, 8am, 11am, 5pm, 8pm, and 9pm ET hours. “Give the President of the United States a pacifier and a rattle and put him in the crib,” Mudd declared during his 11am ET appearance. 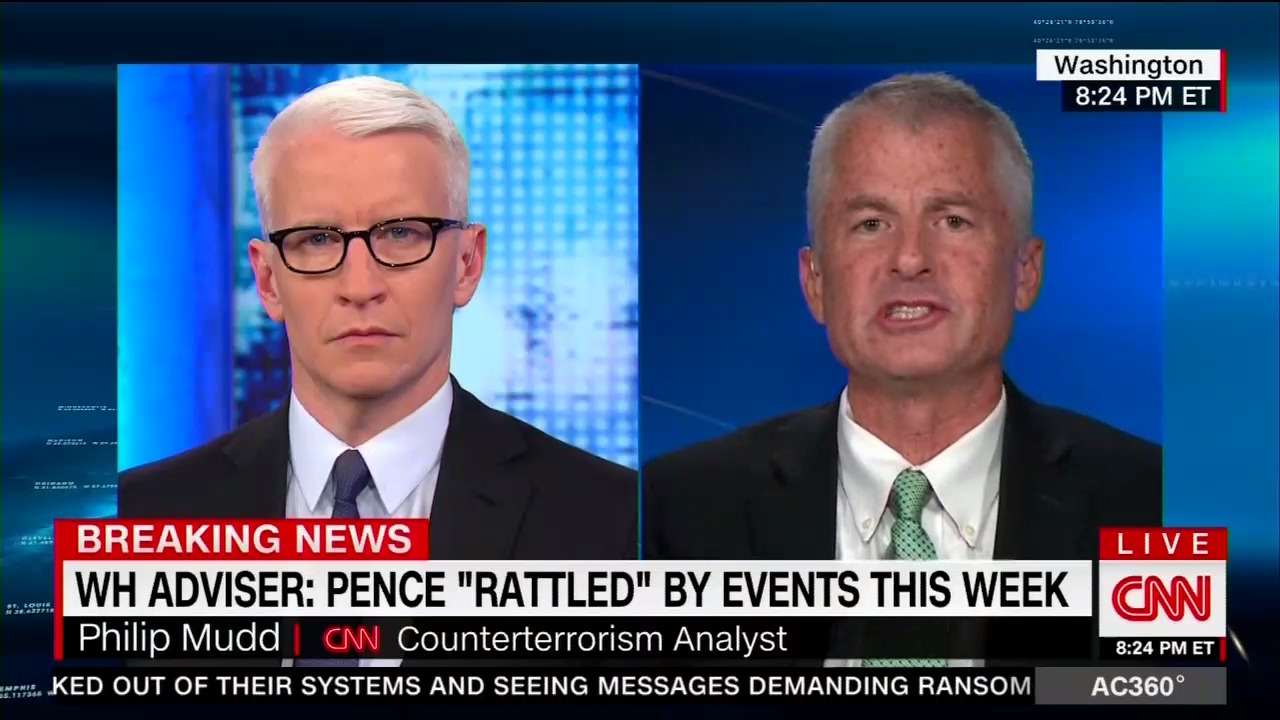 Nine hours later, Mudd was asked about those comments by 8pm anchor Anderson Cooper. “The President is losing credibility by the day for childish comments that undercut his ability to have traction as President,” Mudd repeated.

During the 6am hour of New Day, CNN political analyst David Gregory claimed Trump’s firing of Comey “undermine[d] our democratic institutions.” During the 9am hour of CNN Newsroom, weekend host Brian Stelter popped up to claim that “the story of the first 100 days was dishonesty. So far, the biggest story of the second 100 days has been dishonest.”

Later, in the 3pm ET hour of Newsroom, CNN political commentator Ana Navarro, a Jeb Bush supporter during the primaries, said Republicans needed to rally against the President: “I’m very troubled by the escalation of Donald Trump’s behavior, of President Trump’s tweets....So many Americans feel that the government is in crisis.” 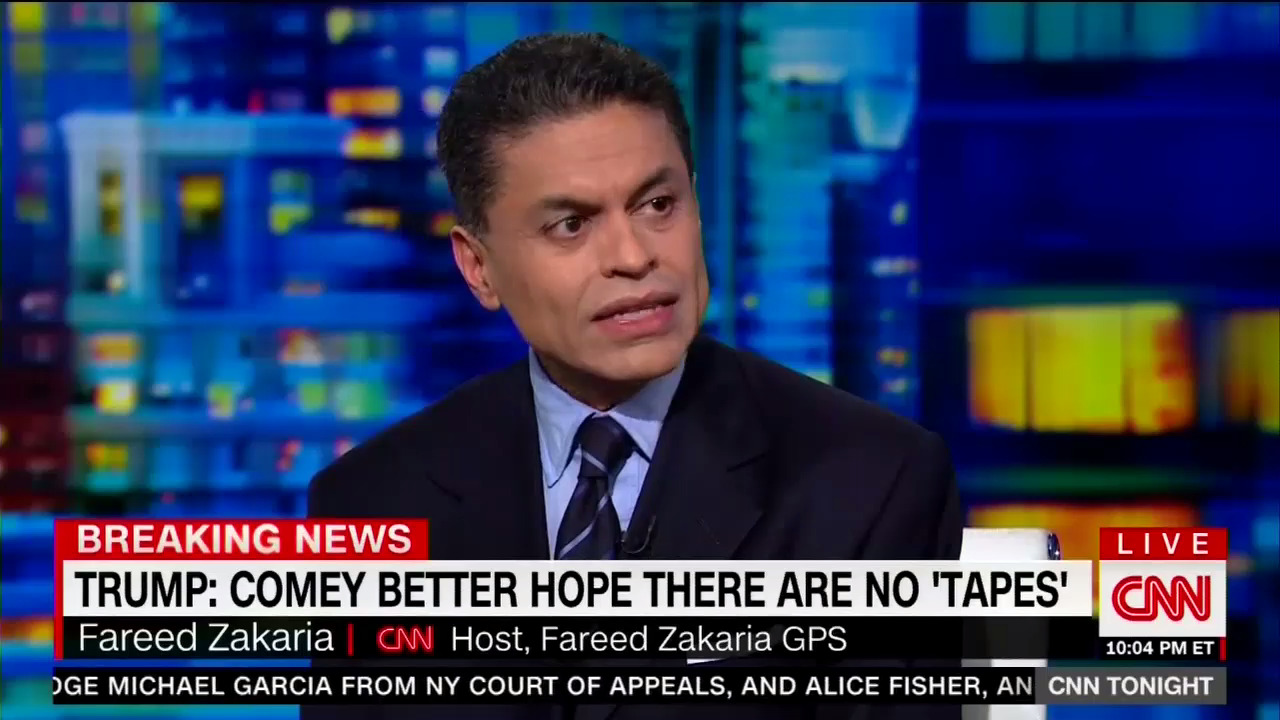 During the 8pm hour of AC360, CNN senior legal analyst Jeffrey Toobin complained that some “were normalizing behavior that would have been seen as completely outrageous by any other President.” Then in the 10pm hour of CNN Tonight, weekend host Fareed Zakaria said Trump’s suggestion that he might have taped a conversation with Comey was “bullshit,” sniffing that “this is the farcical version of Watergate, where the guy says, ‘I’ve got a tape,’ and actually he’s got nothing in his hands.”

The imbalance in guests was amplified by the frequent editorializing of CNN’s own hosts and anchors. During the 7am hour of New Day, host Chris Cuomo referred to clips of White House officials struggling to explain the decision to fire Comey as “the mendacity montage, because it’s just filled with lies.”

Opening his noon-hour Inside Politics, CNN host John King hyped that the “initial White House account of how and why Comey was fired lies in shambles, reduced to a heap of falsehoods.”

This review looked at just a single day, but the pattern is overwhelming: CNN is providing nearly wall-to-wall coverage of the Trump presidency, and is anything but down-the-middle in their approach.

Thanks to MRC’s Geoffrey Dickens and Mike Ciandella for assisting in the research for this article.