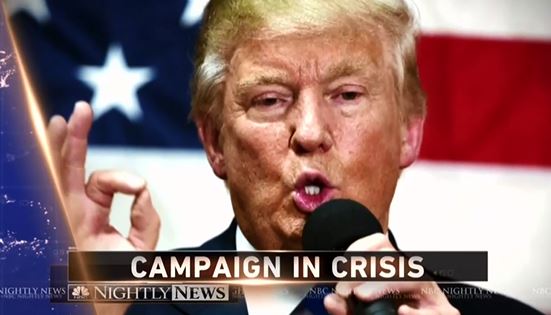 Going into Sunday night's debate, ABC, CBS and NBC offered relentless coverage of the just-disclosed audio of Donald Trump in 2005 talking about his attempted sexual conquests, suggesting this could be the revelation that finally ends Trump's campaign.

Even though the story broke on Friday afternoon, the three broadcast evening newscasts were ready with just under 10 minutes of coverage that night; the next morning, the Saturday morning shows churned out another 36 minutes of coverage of Trump's scandal.

But shortly after the Trump story broke, hacked e-mails gave political reporters a glimpse into the speech excerpts that Hillary Clinton's campaign refused to disclose during her primary campaign against Bernie Sanders. The excerpts showed Clinton boasting in her speeches to big Wall Street banks that she had to present one set of policy views to the public, while keeping her private views to herself.

The networks treated this as an afterthought. Friday's CBS Evening News carved out a mere five-second mention at the conclusion of a story about Russian hacking of the election. The next morning, the Saturday broadcast morning shows offered less than five minutes of coverage to Clinton's latest headache.

On ABC's Good Morning America, co-host Dan Harris pointed out the incongruity to analyst Matthew Dowd: “On any other morning we’d be leading with a story that broke overnight about Hillary Clinton, these leaked excerpts of highly paid speeches she gave to elite Wall Street firms..."

Dowd agreed the disclosures made Clinton "very vulnerable," but then acted as if the media had no choice but to bury them under the avalanche of Trump news: "This is getting totally lost....When you compare it to what Donald Trump is going through, there’s no comparison."

Indeed, looking at Saturday night's news and the Sunday morning and evening shows, the networks produced another 58 minutes of Trump coverage, not including political talk shows like Meet the Press or This Week. But the Clinton scandal received just under three minutes of additional coverage. 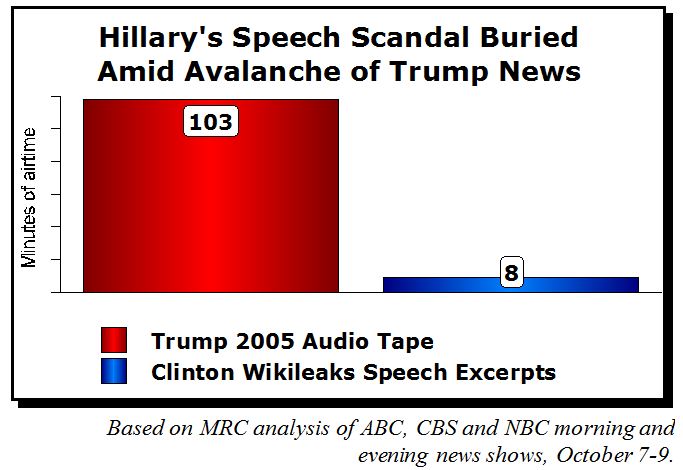 And to those who might suggest that such a sleazy, lewd disclosure about someone who might be president deserves such massive coverage, consider this: In February 1994, former Arkansas state employee Paula Jones sued then-President Clinton for allegedly dropping his pants and instructing her to "kiss it."

That night, CBS and NBC skipped the news, while ABC gave it just a short 16 second brief. According to the MRC's MediaWatch newsletter, "Three days later in a 'Style' piece on the 'primal scream' of hatred for Clinton expressed at a conservative conference, The Washington Post's Lloyd Grove discounted it as 'another ascension of Mount Bimbo.'"

Not exactly the same level of concern the media are showing now for the revelations about Trump's past conduct.