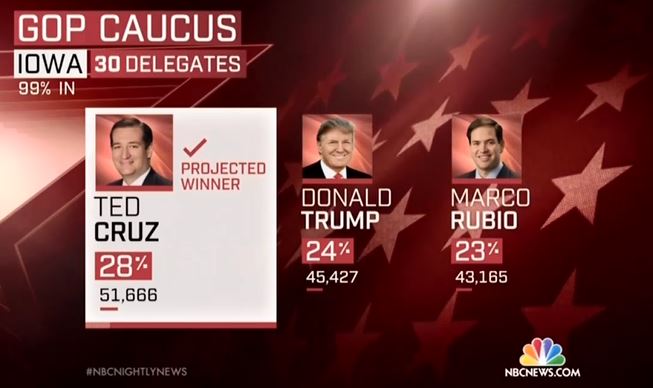 Not only did conservative Texas Senator Ted Cruz win the Iowa caucuses last Monday, but his victory was a surprise: most polls leading up to the event had shown billionaire businessman Donald Trump out in front. In the past, such surprise victories have been followed by a burst of positive news media attention — the famous “Iowa bump” that presidential candidates covet as a way to turbo-charge their campaigns. Think John Kerry in 2004, or Barack Obama in 2008.

But a Media Research Center study of ABC, CBS and NBC evening news coverage finds that Ted Cruz has actually received what might be called a negative bump in the week since Iowa, garnering fewer minutes of total TV news airtime (16 minutes, vs. 21 minutes before the caucuses) and a significantly smaller share of GOP campaign coverage than he had in the week leading up to the caucuses (17.8%, vs. 24.8% earlier).

Not only did Cruz take a back seat to Iowa runners-up Marco Rubio and Donald Trump in overall coverage, much of the attention the Texas Senator did receive was negative. Roughly half (49%) of Cruz’s airtime was devoted to allegations his team perpetrated a “dirty trick” on competitor Ben Carson on caucus night by circulating news reports that Carson would not go directly to the next contest, New Hampshire, after the Iowa vote.

ABC News correspondent Tom Llamas confronted Cruz on February 3, demanding to know: “Was it a dirty trick to confuse voters?” On CBS, reporter Major Garrett said on Saturday that Cruz’s “hardball tactics have backfired in some conservative circles.”

On NBC that same night, correspondent Hallie Jackson found a New Hampshire voter who said she was switching her vote from Cruz to Rubio over the matter: “That’s just dirty politics. You can apologize after the fact all you want, but it happened.”

Instead of Cruz, the networks showered the post-Iowa media momentum on Florida Senator Marco Rubio, who finished third in the caucuses, behind both Cruz and Trump. Compared to the week before the caucuses, Rubio’s network airtime and his overall share of the GOP coverage tripled. (See chart.)

For the networks, Rubio was the candidate with momentum. As NBC Nightly News correspondent Gabe Gutierrez declared February 2: “Rarely has a third-place finish felt so much like a victory.” Most of the week saw reporters touting a Rubio bandwagon: On Thursday, ABC anchor David Muir described Rubio as “gaining steam.” On Friday, NBC’s Gutierrez reported that “the crowds here at Rubio’s rallies continue to grow.” 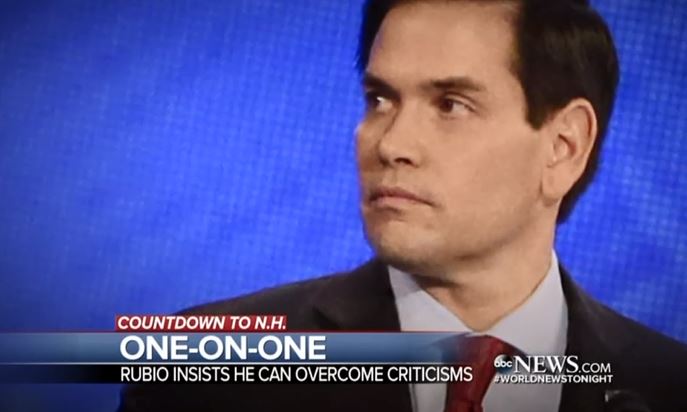 Rubio’s media honeymoon, however, ended after his widely-panned debate performance on Saturday night. ABC’s David Wright on Sunday's World News Tonight said the Florida Senator hadn’t helped himself “by getting stuck in his own talking points.”

On last night’s newscasts, the networks devoted more than six minutes to tearing down the candidate they had spent the past several days celebrating. CBS’s Major Garrett on Monday’s Evening News: “Rubio loyalists concede his post-Iowa momentum has been lost.”

As for Trump, the onetime frontrunner saw his overall coverage sliced in half after the caucuses. During the week leading up to Iowa, Trump had garnered 48 minutes of airtime on the Big Three evening newscasts, or 57.2 percent of the total coverage given to the GOP field. In the seven days after Iowa, Trump’s coverage dropped to 25 minutes of airtime, or 28.6 percent of the total given the GOP field, slightly behind Rubio (26 minutes, 29.6% of the total).

The post-Iowa period marks the first time in seven months that Trump has not overshadowed his GOP competitors in total airtime. Today’s New Hampshire primary will help determine whether or not that is a new trend in Campaign '16 news coverage.