Almost immediately after the shooting in Tucson that killed six people and left Democratic Congresswoman Gabrielle Giffords severely wounded, the media establishment linked the attack with a debate about “civility,” suggesting an association between Jared Loughner’s rampage and the words and phrases used in national political debates.

Many of these network news stories offered ambiguous references to, as CBS’s Bob Schieffer put it on the January 9 edition of Sunday Morning, “the mean and hateful tone that now marks our modern politics.” Newsweek’s Jonathan Alter, in a soundbite on NBC’s Today the next morning, pointed his finger at “the left and the right” as contributing to what he termed “the climate of violence.”

There’s certainly no shortage of instances of the Left deploying violent rhetoric, but how evenly did the media divide the blame during the first few days of this national debate about civility? MRC analysts reviewed all 55 broadcast network stories or segments discussing the discourse from just after the shooting (January 8) through the evening of the national memorial service on January 12, reviewing the ABC, CBS and NBC morning, evening and Sunday talk shows.

While many of those stories offered general comments about “harsh rhetoric,” about three-fifths (31) contained specific references to instances of supposedly intemperate speech. Of those specific examples elevated by the media, more than eight out of ten (82%) were about the conduct of conservatives or Republicans, compared with just 11% which talked about liberals or Democrats. 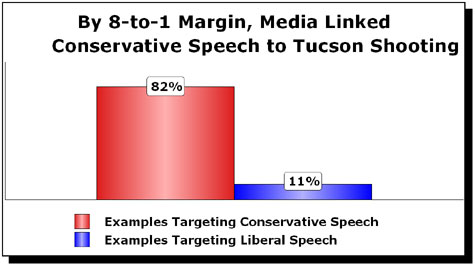 (Please note: a story could have contained more than one specific example of provocative speech. The remaining 7% of specific instances were drawn from the political fringe, not associated with either mainstream conservatives or liberals, including multiple citations on NBC of the “birther” who yelled from the congressional gallery during the reading of the U.S. Constitution, and one reference on ABC to the movie “Zeitgeist,” which supposedly influenced Loughner’s attitudes.)

Of those the media associated with the shooting, former Alaska governor and 2008 GOP vice presidential nominee Sarah Palin was most frequently impugned — mentioned in 24 stories, or more than three-fourths of those containing references to specific actors. Reporters quickly — within hours of the news breaking, when few facts were reliably known — chose to highlight a map of targeted congressional districts Palin’s Web site had drawn up for the 2010 campaign, creating the sinister implication that it was somehow related to the events in Tucson. 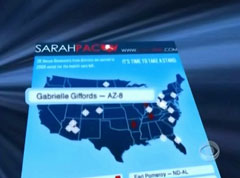 “Giffords was one of 20 Democrats whose districts were lit up in cross hairs on a Sarah Palin campaign Web site last spring,” CBS’s Nancy Cordes noted on the January 8 Evening News. “Giffords and many others complained that someone unstable might act on that imagery.”

On ABC’s World News that same night, correspondent Jon Karl made the same connection: “Giffords had just won re-election in a hard-fought campaign, winning despite being one of the top Republican targets for defeat. She was even on Sarah Palin’s target list.”

“Not since Timothy McVeigh attacked the federal building in Oklahoma City has a crime sparked so much attention on anti-government rhetoric,” NBC’s Lee Cowan noted on Today January 10. “That map Sarah Palin put up on Facebook last year, targeting Congresswoman Gifford’s seat, made Gifford nervous, even then.” 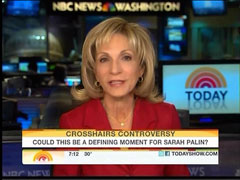 The following morning on the same program, correspondent Andrea Mitchell suggested Palin was off the hook — at least, for now: “Was her gun image inflammatory? There is no direct link to this suspect, as far as investigators know.”

Another nine stories linked the Tea Party to the tragedy. “Giffords, a conservative Democrat, was concerned about heated rhetoric from the Tea Party,” NBC’s Kelly O’Donnell noted on the January 9 Today, the morning after the shooting. Anchoring ABC’s World News on January 8, David Muir passed along how Giffords father was asked “Did your daughter have any enemies? And his response was, ‘Yes, the whole Tea Party.’”

As for pointing fingers at liberals or Democrats, both CBS and NBC once highlighted how then-Democratic senate candidate Joe Manchin shot a copy of the cap and trade bill in a TV ad last year (a position that actually puts Manchin to the right of most in his party). NBC’s Andrea Mitchell twice acknowledged (once on Today, once on the Nightly News) how, just days before the shooting, a blogger at the left-wing Daily Kos web site had written a hostile item about Giffords voting against Nancy Pelosi for House Speaker: “He had written that she was, quote, ‘dead to him’” — an anecdote that went unreported on ABC and CBS.

On the January 9 edition of NBC’s Meet the Press, moderator David Gregory cited how then-Representative Alan Grayson “compared Republicans to the Taliban” in his campaign last year. Only ABC’s George Stephanopoulos mentioned (mildly) the existence of harsh left-wing speech on NBC’s cable network, MSNBC, relaying on the January 9 This Week how “on the left, Keith Olbermann last night on MSNBC, apologizing for any statements he might have made in the past that incited violence in any way.” For its part, none of NBC’s “civility” coverage ever talked about the inflammatory rhetoric of their MSNBC colleagues.

If the media want to have an honest debate about civility, then journalists need to confront the real and harsh examples of liberals engaging in the sort of rhetoric they ostensibly deplore. And the first topic for that debate needs to be the highly un-civil way the Left and many in the media suggested mainstream conservatives and the Tea Party were somehow culpable for the horrible acts of January 8.

And if they choose to continue furthering the Left’s baseless allegations designed to smear conservatives, the media’s self-appointed civility cops are themselves contributing to the coarsening of American politics — the very thing they purport to decry.