Hypocrisy Flashback: ‘It Is Political Dissent That Created This Country and Sustained It and Improved It.’ 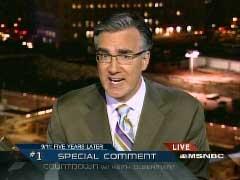 With the Obama administration and their friends in the media denouncing the sometimes loud dissent that liberals are facing in town hall meetings on health care, it’s worth recalling how some of those same journalists celebrated the anti-Bush dissenters and denounced what they claimed was the Republican administration’s attempts to stifle dissent.

Back in 2006, MSNBC’s Keith Olbermann attacked what he called President Bush’s “portable public chorus” (does President Obama have one of those?) For telling “those who dissent...[that] we are somehow un-American.” PBS’s Bill Moyers in 2003 found it “galling” to see “all those moralistic ideologues in Washington...attacking dissenters as un-American.”

In 2003, Olbermann saluted protests: “It is political dissent that created this country and sustained it and improved it.” But on Friday’s Countdown, Olbermann called the anti-Obama protests “societal sabotage,” determined that the grassroots groups are “fake” and insisted that “the protestors are not interested in hearing any voices other than their own.” (But the anti-Bush protesters were open-minded?)

That same night, ABC called the protests “ugly,” while CBS termed them “nasty.” Also on Friday, former CNN reporter Bob Franken scolded the “organized intimidation” of “a crazed group of people,” whom he described as “partisan groups that whip up their fear-of-change ultra-conservative base.” MSNBC ran graphics on Monday about “unhinged” conservatives “scaring seniors” with their “health care hysteria.” Those don't doesn't sound like efforts to elevate dissent as a key element of a healthy democracy.

For those with short memories, here are a few examples of how liberal reporters talked about dissent during the Bush administration:

■ Co-host Harry Smith: "[Former White House press secretary Scott McClellan] talks about the failure of mainstream media to hold the Bush administration’s feet to the fire in the run-up to the war. Is that an allegation that feels to you like it has merit or not?"...
CBS anchor Katie Couric: "I think it’s one of the most embarrassing chapters in American journalism. And I think there was a sense of pressure from corporations who own where we work and from the government itself to really squash any kinds of dissent or any kind of questioning of it. I think it was extremely subtle but very, very effective. And I think Scott McClellan has a really good point."
— CBS’s The Early Show, May 28, 2008.

■ “Whatever you think of its policies, the current administration has been more secretive, more mistrustful of an inquisitive press, than any since the Nixon administration. It has treated freedom of information requests with contempt, asserted sweeping claims of executive privilege, even reclassified material that had been declassified. The administration has subsidized propaganda at home and abroad, refined the art of spin, discouraged dissent, and sought to limit traditional congressional oversight and court review.”
— New York Times Executive Editor Bill Keller delivering the Hugo Young Memorial Lecture in London, as reported by Britain’s Guardian newspaper, November 29, 2007.

■ “When those who dissent are told time and time again — as we will be, if not tonight by the President, then tomorrow by his portable public chorus — that he is preserving our freedom, but that if we use any of that freedom, we are somehow un-American; when we are scolded, that if we merely question, we have ‘forgotten the lessons of 9/11;’ look into this empty space behind me and the bipartisanship upon which this administration also did not build, and tell me this: Who has left this hole in the ground? We have not forgotten, Mr. President. You have. May this country forgive you.”
— MSNBC’s Keith Olbermann on September 11, 2006, ending his Countdown with a commentary from the site of the World Trade Center.

■ “This has been a year in which dissent, especially taking an unpopular or minority political opinion, has been attacked by people like Mr. O'Reilly. In the last year, it has not been enough just to disagree with dissenters. Many of us have decided it is necessary to silence them. Which is really kind of ironic since it is political dissent that created this country and sustained it and improved it. But ask the Dixie Chicks about how well this year we Americans kept our pledge to be tolerant of dissent, our delight in disagreeing with your opinion but being willing to fight to the death to protect your right to express it. ”
– Keith Olbermann on MSNBC’s Countdown, Sept. 29, 2003.

■ Peter Jennings: “Finally this evening, what it sometimes costs to be in the minority and say what you think publicly. There is nothing like a war to create tension between some of those who most fervently support it and those who do not. And as we’ve seen in the case of this war, when those who are opposed happen to be in show business, well, some other people want to make them pay....”
Actor Tim Robbins: “A chill wind is blowing in this nation.”
Jim Wooten: “In Washington this week, Robbins criticized the political climate in which his right to express his views has come under attack....All this has reminded some of the McCarthy era’s blacklists that barred those even accused of communist sympathies from working in films or on television.”
— ABC’s World News Tonight, April 16, 2003.

■ “Across the country, citizens have been coming out to voice their opposition, all calling for the same things. They want government accountability, they want environmental justice, and most of all, they’re calling for peace....While protesters like today are a statistical minority, in American history protests like this have been prescient indicators of the national mood. So the government may do well to listen to what’s said today.”
– ABC correspondent Chris Cuomo previewing an afternoon protest rally planned for Times Square, on a special five-hour Saturday edition of Good Morning America, March 22, 2003, three days after the war in Iraq began.

■ “I decided to put on my flag pin tonight...I put it on to take it back. The flag’s been hijacked and turned into a logo — the trademark of a monopoly on patriotism. On those Sunday morning talk shows, official chests appear adorned with the flag as if it is the Good Housekeeping Seal of Approval, and during the State of the Union did you notice Bush and Cheney wearing the flag?...More galling than anything are all those moralistic ideologues in Washington sporting the flag in their lapels while writing books and running Web sites and publishing magazines attacking dissenters as un-American.”
— Bill Moyers on PBS’s Now, February 28, 2003.

■ “It’s an obscene comparison, and I’m not sure I like it, but there was a time, in South Africa, where people would put flaming tires around peoples’ necks if they dissented. And in some ways, the fear is that you’ll be necklaced here, you’ll have the flaming tire of lack of patriotism put around your neck. Now it’s that fear that keeps journalists from asking the toughest of the tough questions and to continue to bore in on the tough questions so often. And again, I’m humbled to say, I do not except myself from this criticism.”
– Dan Rather on the BBC’s Newsnight program, May 16, 2002.