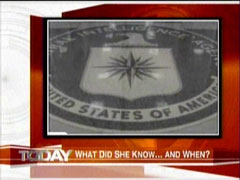 After three weeks of virtual silence, all three broadcast networks provided full reports last night (Thursday) about House Speaker Nancy Pelosi’s shifting story about what she knew about the interrogation methods used against al Qaeda terrorists, methods that liberals have decried as criminal torture. This morning (Friday), NBC and CBS also provided full reports, but ABC’s Good Morning America weirdly relegated Pelosi’s rant that the CIA “misleads us all the time” to a brief, 28-second report during the 8am ET hour.

That’s about as much time as the newscast gave to the rescue of a kangaroo caught in deep water off an Australian beach.

NBC’s Today was by far the toughest on Pelosi this morning, with co-host Matt Lauer opening the show by demanding: “What did she know and when did she know it? The CIA claims in a 2002 briefing, they told House Speaker Nancy Pelosi they were using harsh interrogation techniques. She says that’s a lie. So who’s telling the truth?”

Lauer also brought on Missouri Senator Kit Bond, who criticized Pelosi’s story that she was not told about waterboarding at a September 2002 briefing conducted after al Qaeda operative Abu Zubaydah had been waterboarded 83 times. “I have looked at the underlying materials, not only the records they kept, but the cables they sent out to the field and from the, what was apparently contemporaneous documents,” Bond declared, “It’s clear that they did tell her.”

On CBS’s The Early Show, co-host Harry Smith also took a skeptical line against Pelosi, asking pundit John Dickerson, “Nancy Pelosi seems to be digging herself into a hole. Is it a hole she can get out of?” Dickerson suggested Pelosi made a tactical mistake by adding the CIA to her list of evil bogeymen: “Usually, when you have one opponent, in this case the Republicans, you kind of stick to one. She’s added a second, taking on the CIA. Now the CIA's job, in some ways, is protecting itself, and it's very good at this.” 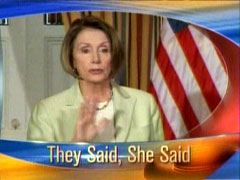 Last night, ABC, CBS and NBC all run fairly straight-forward reports on their evening newscasts, with only the CBS Evening News (with Jeff Glor filling in for Katie Couric) teasing the Pelosi story at the top: “Also tonight, Speaker Pelosi makes an explosive allegation....But what did the Speaker know about waterboarding, and when?"

It seems safe to say that the networks finally acknowledged the Pelosi story not because they felt her previous inconsistencies and potential hypocrisy were worth deeper investigation, but because the Speaker herself upped the ante with unsupported allegations that the CIA routinely lies or misleads Congress.

Here’s a little more of how each of the broadcast networks approached the Pelosi story last night and this morning, starting with ABC’s World News, which got to the story after items on the Chrysler dealerships closing and the shuttle's mission to fix the Hubble telescope:

CHARLES GIBSON: House Speaker Nancy Pelosi created something of a political firestorm today, accusing CIA officials of lying to Congress in 2002 about its interrogation methods. Did they lie? Here's Jonathan Karl....

JONATHAN KARL: Pelosi's words seem to directly contradict a declassified timeline of congressional briefings compiled by the CIA, which says Pelosi was told of the specific interrogation methods used on Zubaydah. Pelosi is also contradicted by the only other member of Congress at the briefing, Republican Porter Goss, who wrote recently, "We understood what the CIA was doing. We gave the CIA our bipartisan support." Although she says she was told it was not used, Pelosi acknowledged the CIA did tell her that they had legal approval for waterboarding.

FILL-IN ANCHOR JEFF GLOR: Also tonight, Speaker Pelosi makes an explosive allegation.
REPORTER: You're accusing the CIA of lying to you in September of-
NANCY PELOSI: Yes.
GLOR: But what did the Speaker know about waterboarding, and when?

REPORTER BOB ORR: In uncommonly strong language, Pelosi accused the CIA and the Bush administration of skirting the truth about the treatment of al qaeda terror suspects....But Republicans say Pelosi and other Democrats were fully in the loop. Between 2002 and 2007, CIA records show intelligence committee members from both parties received at least 28 classified briefings on harsh interrogations.

REPORTER KELLY O’DONNELL: Good evening, Brian. The Speaker has long been a strong opponent of waterboarding. And after new details came out that showed that she knew the technique was being used as early as several years ago, some of the her critics are wondering, what, if anything, did she try to do to stop it?

CHRIS CUOMO: House Speaker Nancy Pelosi is accusing the CIA of lying about its brutal interrogations of terror suspects during the Bush administration. Pelosi insists that in September 2002, the CIA told her point blank that waterboarding was not being used. By then, a key al Qaeda operative had been waterboarded 83 times. But, a CIA time line shows Pelosi had been told about its use of the controversial technique at that 2002 briefing.

CO-HOST HARRY SMITH: Nancy Pelosi seems to be digging herself into a hole. Is it a hole she can get out of?

POLITICAL ANALYST JOHN DICKERSON: Well, it is a big hole. Usually, when you have one opponent, in this case the Republicans, you kind of stick to one. She's added a second, taking on the CIA. Now the CIA's job, in some ways, is protecting itself, and it's very good at this. And if she wants to, she can talk to the Bush administration officials who spent a good portion of the last administration fighting an internal war with the CIA. So she's in a tough spot.

SMITH: And the CIA, of course, came back and said, 'on the contrary, you knew exactly what was going on here.'

DICKERSON: That's exactly right. They said that she was briefed in September of 2002 about what was going on. And also they've said that, you know, that she should know -- I mean, she's -- what's important here is that she said that the CIA lied in September of 2002. They're not telling the truth now about what happened at that meeting. And then she made a broader claim that they basically lie regularly to the Congress.

# NBC’s Today, May 15. After the show opening quoted above, Matt Lauer interviewed GOP Senator Kit Bond, with the phrase “Pelosi Under Fire” as the headline:

LAUER: Thanks for joining us. 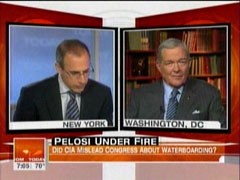 LAUER: Let me use your own words about Speaker Pelosi here. You say, “It’s outrageous that a member of Congress would call our terror fighters liars. It seems that Speaker Pelosi only has one play in her play book - blame our terror fighters.” We’ve got a situation here Senator, where the Speaker of the House is saying the CIA lied to her. The CIA says, “We don’t think so.” How do we get to the bottom of this?

BOND: First, I think it, it’s a tragedy that we are seeing this massive attack on our intelligence community which has kept us safe. First they released the opinions which are put to all of our intelligence collectors at risk, and, and divulge their methods. But now the Speaker is going after the Agency and calling them liars. And I have looked at the underlying materials, not only the records they kept, but the cables they sent out to the field and from the, what was apparently contemporaneous documents.

BOND: It’s clear that they did tell her.

LAUER: Well let me ask you this. She went on, by the way, she went further. She said but “They, they mislead us all the time.” As the vice chairman of the committee on intelligence, who’s received briefings from CIA officials, do you feel you’ve been misled in the past?

BOND: That's unbelievable! They come in to brief the, what we call “Gang of Four” and they tell us about very sensitive operations that are either going on or considered. We find out all the details. They let us know how it's developing and, and what's happened. And their job is to give us as much information as possible. And I've been in on quite a few of those briefings and found them always to be accurate. And of course I was not there when she was briefed. But that's been the practice I've seen.

LAUER: And do we need to put this into perspective, Senator, by going back to the time period of this briefing, September of 2002? We’re a year away from the 9/11 attacks, the country's still reeling from that day of terror, and wondering why more wasn't done to get to the bottom of that plot. So might information on interrogation techniques and waterboarding cause less outrage then than perhaps it might among some Democrats, and even Republicans today?

BOND: Clearly, when you read the cables that went back to the field, the people who were briefed were asking about the kind of information that was received. And they wanted to know what information had been received. They were not saying, “Hey, don't do waterboarding or any other of the enhanced techniques.” They said, “Are we getting enough information?” That was the focus at the time, and clearly, we were all concerned about a second attack, and I believe information stopped at least one, if not several, attacks in the United States.

LAUER: Real, real quickly, Senator. Do, do you thin-, is, is, is Nancy Pelosi right when she says, even if she had protested there would be nothing she could have done about it at the time. Couldn’t she have demanded hearings? Or would that have been out of line?

BOND: Oh, that's flat wrong! We have seen, we've been advised of things that were contemplated that we thought were wrong and when we objected to them, they dropped them. But you can, you can enlist other people, you can call for a, a closed hearing of-

BOND: -of the House or the Senate, protected by the speech in debate clause. You can cut funding. There's a whole list of things, and she did none of those that, that I'm aware of.

LAUER: Alright Senator Kit Bond. Senator thanks for your time this morning.