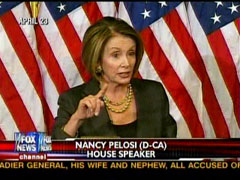 For the past three weeks, controversy has swirled around Democratic House Speaker Nancy Pelosi, who has called for a “truth commission” to expose the supposed war crimes of the Bush administration but who herself was briefed years ago on the use of waterboarding and the other enhanced interrogation techniques that are now drawing howls of outrage.

ABC, CBS and NBC have said nothing about the Speaker’s shifting stories, or the potential hypocrisy of her once supporting (or at least not objecting to) policies that she would later condemn as illegal “torture.”

The current round of stories began April 22, after the Obama administration released selected memos from the Bush administration on the legal limits to interrogation. That night, NBC’s Andrea Mitchell offered a brief mention of how Pelosi was one of those who had been told: “Members of Congress were briefed at the time and reportedly didn’t dissent, including intelligence committee leaders Nancy Pelosi, Porter Goss, Bob Graham and Richard Shelby.” ABC and CBS said nothing about Pelosi that night.

That contradicted what Mitchell reported the previous night, but neither NBC nor the other networks provided any updates.

Last week, the CIA released documents showing that one of Pelosi’s top aides went to a briefing in 2003 where he heard that waterboarding was actually being used. The May 9 Washington Post explained:

A top aide to  House Speaker Nancy Pelosi attended a CIA briefing in early 2003 in which it was made clear that waterboarding and other harsh techniques were being used in the interrogation of an alleged al-Qaeda operative, according to documents the CIA released to Congress on Thursday.

Pelosi has insisted that she was not directly briefed by Bush administration officials that the practice was being actively employed. But Michael Sheehy, a top Pelosi aide, was present for a classified briefing that included  Rep. Jane Harman (D-Calif.), then the ranking minority member of the House intelligence committee, at which agency officials discussed the use of waterboarding on terrorism suspect Abu Zubaida.

A Democratic source acknowledged yesterday that it is almost certain that Pelosi would have learned about the use of waterboarding from Sheehy....

Senior [CIA] officials have chafed at criticism of their interrogation activities from lawmakers who, when made aware of the programs over past years, mostly did not object. One former senior agency official, who spoke on the condition of anonymity because the substance of the briefings is classified, said some lawmakers, after being told of the enhanced techniques, “questioned whether we were doing enough.”

Again, no coverage from ABC, CBS and NBC.

On Tuesday, CNN reported confirmation that Pelosi had indeed been told by Sheehy about the waterboarding in 2003: “A source close to House Speaker Nancy Pelosi now confirms that Pelosi was told in February 2003 by her intelligence aide, Michael Sheehy, that waterboarding was actually used on CIA detainee Abu Zubaydah.”

Again -- you guessed it -- no coverage from ABC, CBS and NBC.

The networks should have been skeptical of the flamboyant outrage of Pelosi and other top Democrats of the Bush administration’s interrogation techniques. Back in December 2007, the Washington Post disclosed that congressional leaders offered “mostly quiet acquiescence, if not outright support” as they heard about the use of waterboarding to pry secrets out of captured al-Qaeda leaders:

Individual lawmakers’ recollections of the early briefings varied dramatically, but officials present during the meetings described the reaction as mostly quiet acquiescence, if not outright support. “Among those being briefed, there was a pretty full understanding of what the CIA was doing,” said Goss, who chaired the House intelligence committee from 1997 to 2004 and then served as CIA director from 2004 to 2006. “And the reaction in the room was not just approval, but encouragement.”...

“In fairness, the environment was different then because we were closer to Sept. 11 and people were still in a panic,” said one U.S. official present during the early briefings. “But there was no objecting, no hand-wringing. The attitude was, ‘We don’t care what you do to those guys as long as you get the information you need to protect the American people.’”...

As for Pelosi in particular:

Pelosi declined to comment directly on her reaction to the classified briefings. But a congressional source familiar with Pelosi's position on the matter said the California lawmaker did recall discussions about enhanced interrogation. The source said Pelosi recalls that techniques described by the CIA were still in the planning stage — they had been designed and cleared with agency lawyers but not yet put in practice — and acknowledged that Pelosi did not raise objections at the time.

As all of this was unfolding on cable news and in the big newspapers, the only reference on the broadcast networks to Pelosi’s double-speak came in a brief exchange during the roundtable of ABC’s This Week back on April 26. After watching a clip of Pelosi say she favored “a truth commission” to delve into the Bush administration’s tactics, regular panelist George Will tartly observed: “When Speaker Pelosi says she wants a truth commission, she’d better be prepared to get acquainted with that commission, because they’re going to want to know how a ten-year member of the Intelligence Committee was shocked and surprised.”

In the only other comment on the matter, Democratic mover-and-shaker Donna Brazille seemed willing to expose Pelosi if it meant also exposing the Bush administration: “Let the truth come out, George. What’s wrong with that? Let the truth set us free, so to speak....Let’s hear from those Democrats who, you know, were briefed on, on this issue.”

The broadcast networks have offered ample coverage of Democratic allegations that the Bush administration used either immoral or criminal methods in prosecuting the War on Terror. Can’t they spare a few moments to note that one of the loudest complainers is someone who knew all about it years ago — and has recently had a suspiciously shifting story about what she knew and when she knew it?
Congress War on Terrorism Bias by Omission ABC CBS NBC NBC Nightly News Washington Post This Week