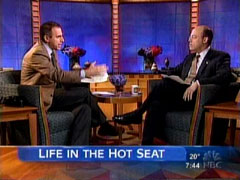 Before Scott McClellan was President Bush’s Press Secretary, there was Ari Fleischer, and when Fleischer left the White House he wrote his own book, “Taking Heat: The President, the Press, and My Years in the White House.” Unlike McClellan, Fleischer did not take pot shots at his former employer, but did include some telling examples of the liberal bias of press.

Perhaps not surprisingly, then, while McClellan’s yet-to-be-officially-published book has already become the liberal media’s favorite story of the day, a Nexis search shows that Fleischer’s memoir generated virtually no broadcast or cable news coverage, and no front-page coverage in the nation’s newspapers.

Indeed, TV coverage the week after Fleischer’s book was released was limited to just eight interviews, none given that much prominence: one on NBC’s Today (7:43am), one on CBS’s Early Show (last half-hour), one on MSNBC’s Scarborough Country, two on CNN (Lou Dobbs Tonight and Anderson Cooper 360) and three on FNC (Big Story, Special Report, and Hannity & Colmes).

Fleischer also had interviews on non-news shows, like Comedy Central’s Daily Show, that would not be included in the Nexis database.

McClellan begins his book tour tomorrow (Thursday) on Today, just where Fleischer began on March 3, 2005. As MRC’s Brent Baker recounted in a CyberAlert the next morning, NBC’s Matt Lauer seemed upset at Fleischer’s accusations of media bias and tried to embarrass him by re-playing his pre-war statements about Iraq’s weapons of mass destruction:

When former White House Press Secretary Ari Fleischer, on Thursday's Today, raised media bias, maintaining that it's "easier to be a Democrat talking to the press than a Republican," Matt Lauer avoided the topic and jumped in to press Fleischer about "getting things right and wrong" before the Iraq war when Fleischer asserted Saddam Hussein had weapons of mass destruction. Lauer asserted: "Didn't prove to be true. Regrets, embarrassment, frustration, what?"

Here’s how Lauer treated Fleischer when he appeared on the March 3, 2005 Today, as transcribed at the time by MRC’s Geoff Dickens:

LAUER: "Is it fair to say Ari that there is a certain suspicion on the part of the White House for the press?"

FLEISCHER: "Well I think every White House develops a sense of weariness and this is a part of what I wrote about. I think the press' first bias is not ideological I think it's in favor of conflict, regardless of who they cover. Another example that's in the book, Matt, is remember that haircut that President Clinton got in California, that $200 haircut? Delayed all those flights. It delayed one flight for two minutes and none of the press, almost none of the press corrected their stories-"

LAUER: "But when Andy Card, the White House Chief of Staff quote, was quoted as saying, quote, 'I don't believe they,' referring to the press, 'have a check and balance function.' Is that a fair statement on your part?"

FLEISCHER: "Yeah I disagree, I disagree with that. I do think so and I wrote that in the book. One of the things I wrote and I put it prominently in the book is we are a better and stronger country 'cause the press get a thousand things right everyday. And that's true. But I also talked about the things where I thought there were issues with the press, ideological issues where I think, on policy issues, particularly social policy. It's easier to be a Democrat talking to the press than a Republican."

LAUER jumped in to cut him off: "Let's talk about getting-"

FLEISCHER: "But be clear I did say the press gets things right and we're a better country. And that's, that's essential."

LAUER tried again: "Let's talk about getting things right and wrong and for the control room I'm jumping ahead to a soundbite here. In the days leading up to the war you were very strong about the reasons the United States was going to war with Iraq, okay? And we talked about weapons of mass destruction. Let's play that tape."
CLIP OF FLEISCHER, at undated White House briefing: "Well there's no question that we have evidence and information that Iraq has weapons of mass destruction, biological and chemical particularly. This was the reason that the President felt so strongly that we needed to take military action to disarm Saddam Hussein."
LAUER: "Didn't prove to be true. Regrets, embarrassment, frustration, what?"

FLEISCHER: "Frustration." And he went on to point out how all intelligence agencies, as well as Bill Clinton and John Kerry, believed Iraq had WMD.

Lauer moved on to the media's favorite obsession that week:

LAUER: "I can't let you go without asking about Jeff Gannon who's the reporter, the Washington bureau chief for Talon News, found out now that he had an alias. That of course he was asking some very easy questions of the administration. When you were the press secretary, you stopped going to him for questions. Why did you do that and are you surprised they went back to him after you left?"

FLEISCHER: "Well I stopped calling on him because I heard he worked for something called GOPUSA. And my line in the sand is that if you work for a political party or candidate you're not a reporter but I was assured that GOPUSA, despite its name, was not a part of the party. His editor called me to tell me that and I confirmed it with the Republican National Committee."

LAUER: "Were you surprised that the, the current press secretary went back to calling on him?"

FLEISCHER: "Well I do think that there is a slippery slope if government officials stop calling on reporters based on ideology. Because that room is home to a lot of colorful characters left and right. And I used to call them mainstream reporters first and then I tried to get to the colorful characters at the very end. 'Cause they too are entitled to questions and the government should not pick and choose reporters on the basis of ideology."