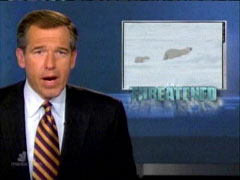 Wednesday’s NBC Nightly News cheered the Bush administration’s recent liberal moves on climate change — “a very big week for those who are fighting to save the environment,” anchor Brian Williams celebrated — but NBC’s “Environmental Affairs” correspondent Anne Thompson nevertheless trotted out an activist with the National Resources Defense Council to complain that the administration still hasn’t gone far enough to the left on global warming.

But Nightly News had no time for any conservative or free market spokesman who might have said that the administration had already gone too far in trying to appease environmental liberals, and that the act of placing polar bears on the threatened species list would make it easier for a more liberal successor to pursue economically-punishing regulations.

Writing in The American Spectator, the Competitive Enterprise Institute’s Iain Murray outlined the conservative argument that NBC ignored. An excerpt:

A sensible discussion of the polar bear requires acknowledging a simple fact: that the polar bear is merely a proxy for something else. The environmental pressure groups like the Center for Biological Diversity that have petitioned for the listing acknowledge that their reason for doing so is concern over global warming. The more warming, they argue, the less sea ice; the less sea ice, the fewer polar bears. So their hope was that the Endangered Species Act will give the federal government power to curtail sources of global warming -- such as your car or air conditioning system.

Secretary Dirk Kempthorne attempted to frustrate this desire by erecting regulatory barriers, like a statement from the Director of the US Geological Survey that melting ice in specific areas could not be tied to specific sources of carbon emissions. These barriers have all the legislative strength of tissue paper. It will take but a few moments of a new Administration to blow them away.

After that, the first effects of the now-sacrosanct listing will probably be felt not in Alaska, where America's polar bears range, but in any state thinking of adding a coal-fired power plant to its energy infrastructure. The Act will be used by the new government to intervene -- and by activists to litigate -- against new construction in any controversial permitting process.

Once that precedent is set, the Act would be used to stop uncontroversial, even popular permit applications. Electricity supplies would be constrained. Blackouts and brownouts would proliferate. Were you to buy a plug-in electric car a few years from now, you may well find you have no electricity to power it. 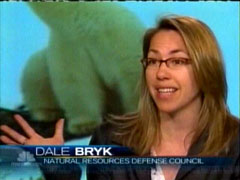 Not a peep of that point of view on NBC, however, which touted the polar bear ruling as “a huge milestone” only undermined by Kempthorne’s decree that the Endangered Species Act not be used to push a Gore-esque agenda. Thompson sought out Dale Bryk of the National Resources Defense Council (no “liberal” label, of course) for a predictable soundbite: “The administration on the one hand is saying yes, global warming is the dominant threat to your survival, but at the very same time they're saying, we're going to do nothing to protect from you that threat.”

Now, the full transcript of the May 14 NBC Nightly News:

BRIAN WILLIAMS: This has been a very big week for those who are fighting to save the environment. Yesterday in an interview, President Bush said there's no question, global warming is real. Then today, a huge milestone by the Bush administration, polar bears were declared a threatened species. But none of that apparently has changed the fight over what to do about climate change. Our report tonight from our Chief Environmental Affairs correspondent Anne Thompson. 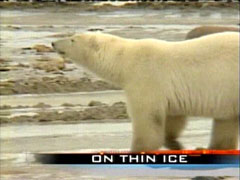 ANNE THOMPSON: The polar bear is on thin ice and could well be on its way to extinction. Today the Bush administration acknowledged global warming is shrinking sea ice, a crucial part of the bear's habitat in Alaska. Interior Secretary Dirk Kempthorne used satellite images to show the dramatic change in ice from 1979 to today in explaining his decision to list the bear as threatened. But he insisted this would not be a way to regulate greenhouse gases from cars and power plants.

SECRETARY DIRK KEMPTHORNE: The Endangered Species Act is not the means nor the method nor the vehicle by which you can deal with global climate change.

THOMPSON: That disappointed many environmental groups, leading some to label the listing as an empty victory.

DALE BRYK, NATIONAL RESOURCES DEFENSE COUNCIL: The administration on the one hand is saying yes, global warming is the dominant threat to your survival, but at the very same time they're saying we're going to do nothing to protect from you that threat.

THOMPSON: Dr. Scott Bergen of the Wildlife Conservation Society says they can always see the impact of the shrinking ice: pregnant females are lighter and fewer cubs are surviving their first year. [TO BERGEN] What role does the sea ice play in the polar bear's survival?

THOMPSON: The 20,000-plus bears use the ice to catch the seals they feed on. [at Central Park Zoo] The fear is without protection, this will be one of the few places polar bears exist. Last year government scientists predicted two-thirds of all polar bears will disappear by the year 2050 including every bear in Alaska. And today, a new international study confirmed man-made climate change is causing a reduction in the number of bears. More evidence that those in the wild tonight are at risk. Anne Thompson, NBC News, New York.