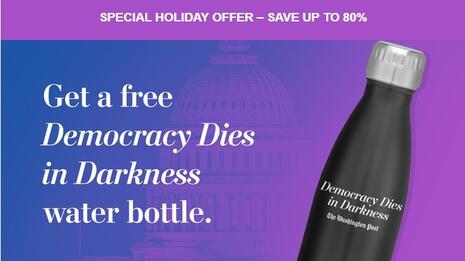 The media elite routinely play the game that to attack the media is like attacking democracy itself. Trump calling the media the "enemy of the people" leads to dire slogans like The Washington Post warning "Democracy dies in darkness." If Biden wins, they may get a new slogan.

But according to a survey conducted by the Pew Research Center in Washington, D.C., only half of American adults are confident that journalists are acting in the best interests of the public. Respondents to the poll did not see media criticism as somehow showing a disrespect for democracy. Rather, they think being wary of the media is a sign of a healthy democracy:

There are troubling numbers in here for the media.

-- While 61 percent of people in the country expect the news they get to be accurate, 69 percent think news organizations generally try to cover up mistakes when they do happen.

-- Why? 55 percent say that careless reporting is a major factor behind mistakes in news stories, and 44 percent thought it was a desire to mislead the public, while other reasons including the rapid pace of breaking news (53 percent) are also seen as responsible for such errors.

-- A large majority (72 percent) say news organizations do an insufficient job explaining to the public where their money comes from. Six-in-ten U.S. adults also say news organizations are not forthcoming about conflicts of interest. On top of that, a vast majority of Americans (80%) think that the news they get is at least “somewhat” influenced by financial and corporate interests.

-- While most Americans want personal connections with their news sources, many do not experience it. More than half of U.S. adults say their news outlets do not particularly value them (57%) or that news organizations do not understand people like them (59%), and nearly two-thirds (63%) say they do not feel particularly loyal to the outlets they get their news from.

-- About half (51%) say that seeing official corrections from news outlets makes them more confident in that outlet, compared with just 12% who say it makes them less confident. (TV networks almost never correct anything on air.)

Partisanship is the strongest fact in the public's view of the media. Republicans, and especially Donald Trump supporters, have the most skepticism of the media's ethics.

So when errors occur in news stories, Republicans overall are more likely to think that mistakes happen because of ill will. Six-in-ten Republicans and Republican-leaning independents cite a desire to mislead audiences as a major reason why significant mistakes make their way into news stories, compared with about a third of Democrats (32%) who feel this way. This view is especially prevalent among Republicans who strongly approve of the job that Trump is doing as president.