Propaganda Politico? America ‘Not Number One’ as Chinese Media ‘Piles on’ U.S.

It doesn’t take much effort for liberal journalists to sing the praises of China “outperforming” expectations while hammering America as “disastrously” faltering, especially in response to the coronavirus pandemic. A recent example of this came when David Wertime, the “Editorial Director for China” at the Politico, posted an article entitled: “Not the World's Number One': Chinese Social Media Piles on the U.S."

Here's how Politico tweeted the story: 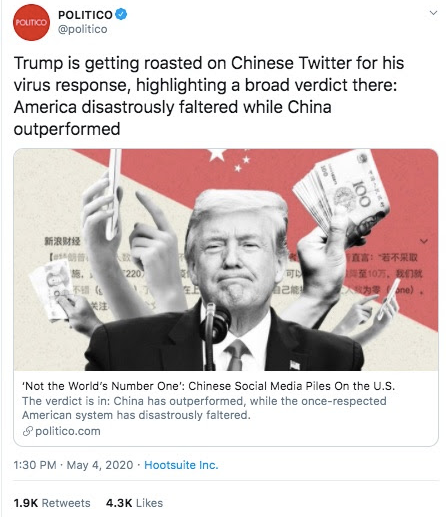 In response, Steve Krakauer used an edition of his Fourth Watch online newsletter to ask: “How Did This Get Published?” before noting that Wertime’s item “reads like it literally came from China’s propaganda outlet.”

To help readers understand how that story was promoted, Krakauer referred to a tweet describing the article as: “Trump is getting roasted on Chinese Twitter for his virus response, highlighting a broad verdict there: America disastrously faltered while China outperformed.” Krakauer then added that Wertime had to use the term "Chinese Twitter” because the actual Twitter site is banned in China; Instead, they call their version “Weibo.”

“If a similar death toll had been reported in China,” one commenter speculated: “‘How many people here would be saying that [we are] a dying country?’” The Fourth Watch reporter next stated: “That’s the piece, basically using the tweets from random Chinese people talking about how terrible Trump is to ... make the case for how terrible Trump is.”

The story goes on to quote these random individuals, without even linking to them, as saying sarcastically: ‘I’m sure God will protect the United States.’”

Seven paragraphs in, the article includes an interesting caveat:

Chinese social media is a highly imperfect lens into widespread public sentiment, full of hot tempers, trolls and the ever-present specter of censorship, particularly given the ruling Communist Party’s power and proclivity to punish dissenting voices.

It is emphatically not real life.

However, that caveat did “not stop Wertime from writing an entire Politico article on it.”

Krakauer also stated: “It would be hilarious if it weren't so dangerously absurd, covering for a country that looks more culpable for the coronavirus outbreak every day.”

Wertime also stated that Trump had heard “a projected American death toll as high as 2.2 million.” However, that statement “landed very differently” in China, where “Trump’s declaration sounded like an astonishing statement of defeat by China’s major geopolitical rival.”

It’s true that major challenges lie in the way of China’s continued growth -- and doubly so that Chinese citizens aren’t told about, or at least allowed to openly talk about, their own country’s failures in timely addressing the coronavirus outbreak.

But from within China, that dynamic only sharpens the apparent contrast between its own smooth competence and the fumbling West.

Meanwhile, Krakauer ended by asking: “How did this incompetent propaganda get published?”