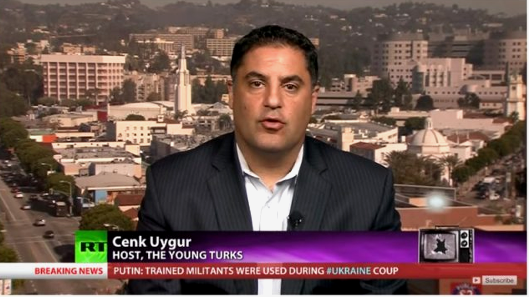 One of the common mottoes liberals love to use is: “Do As I Say, Not As I Do.” That was the case on Wednesday, February 12, when host Cenk Uygur -- creator of The Young Turks news and commentary television program -- insisted his employees not create a union.

The reason Uygur gave for his hypocritical stance was that it would force the small network into bankruptcy even though it would contradict the company’s “worker-first” ethos and its attempt to enhance profits to keep the outlet functional.

According to an article written by Dave Jamieson, a labor reporter with the liberal HuffPost website, the recommendation was made by Uygur during a staff meeting that was supposed to deal with personnel matters but instead was changed when the employees took the issue public earlier in the day.

The discussion took place at the company’s office in Culver City, California, where the host made his “emotional” pitch to keep the “millions of lefty followers” the program has accumulated.

Jamieson noted that the “message was clear, and to at least some staffers, discouraging.”One of the staffers who attended the session told the HuffPost reporter, on the condition of anonymity for fear of retaliation: “We generally feel disappointed, but unshaken. … We feel it’s the right thing to do because of what TYT values.”

During an interview with HuffPost, Uygur said he is a strong supporter of unions, especially at large corporations that aren’t sharing profits with their workers. However, the network founder also stated that having a unionized workforce would bring new legal and bureaucratic costs that TYT can’t sustain.

“The reality is we’re in a precarious position,” Uygur noted. “We’re in a digital media landscape where almost no one makes money or is sustainable.”

As you might expect, the company’s founder noted that he was caught off guard by the union effort, which appeared on Twitter the day of the meeting, and he wasn’t sure if it was real or if he was “being punked.” He barked at someone who was smiling. “The person smiling seemed to be openly mocking the idea that the company might not survive after 18 years. And we put all this blood, sweat and tears into it,” he said. “I don’t find the idea of us going down funny.”

The situation has been further complicated by Uygur’s attempt to fill the Congressional seat vacated by former Rep. Katie Hill, a Democrat who resigned in October amid an ethics probe into her sexual relationship with a staffer.

“Look, at the end of the day, my opinion on it is irrelevant,” Uygur said. “It’s the employees who get to decide and who should decide.”

Of course, one of the staffers described support for forming a union as “a solid majority” before adding: "We love the company. We’re just getting the company to live by its principles.”