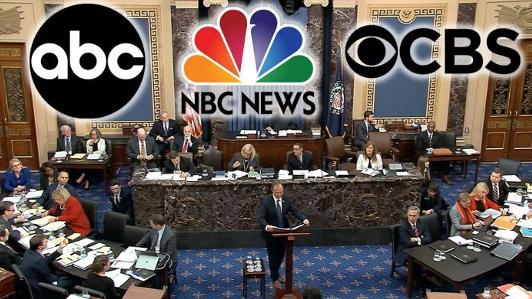 Common complaints during the first seven days of the Senate impeachment trial of President Trump were that the broadcasts went on far too long, and the hearings were boring in part because the coverage usually ran from 1 p.m. through primetime and sometimes into the early morning hours.

With that in mind, it comes as no surprise that ratings for coverage of the hearings fell sharply among the “Big Three” after CBS attracted an average of only 1.52 million viewers, followed by ABC with 1.29 million and 1.26 million for NBC.

According to an article posted on Thursday by A. J. Katz, senior editor of Adweek's TV Newser blog:

He continued: “It’s worth taking into account, however, that NBC ... stuck with the Senate impeachment trial longer than ABC and CBS.” The Eye Network gained ratings by replacing the hearings with its usual afternoon soap operas.

Over the first week, the Peacock Network “showed a total of 1,313 minutes of the trial. That’s nearly 22 hours of coverage over the first seven days.”

Katz then broke down the numbers during the sixth day of the trial.

“CBS was the No. 1 broadcast network for Monday,” the senior editor noted. “The network performed especially well among adults 25-54, averaging 339,000, significantly more than its competition. NBC, on the other hand, hit a low in the demo (190,000).”

Next, the senior editor examined the numbers for the following day, when “CBS averaged the largest total audience of the broadcast networks during … coverage on Tuesday afternoon, averaging 1.34 million total viewers.”

At that point, “ABC was No. 1 in adults 25-54, averaging 276,000 viewers during that 1-3 pm. ET time period.” Those numbers were down from the 5.1 million average of viewers who tuned in these networks the previous Wednesday for the debate about the rules for the trial.

As NewsBusters previously reported, the first day of the Democratic House Managers impeachment arguments took place in front of the Senate, and the broadcast networks (ABC, CBS and NBC) collectively lost about three million viewers who would have been expected to watch their normal fare.”

Nevertheless, the ratings for that Thursday's second day of Democratic arguments came in even lower because “cable news added an additional 4.8 million viewers to the total on Wednesday, but that’s also lower than the 6 million who watched Fox News, NBC or CNN on Tuesday.”