Sister Toldjah at Red State underlined a bizarre tweet from Brian Stelter, the host of CNN’s weekly Reliable Sources program. As he linked to an op-ed in the Philadelphia Inquirer by Christine Flowers about Stelter's critique of Supreme Court Justice Neil Gorsuch appearing on Fox & Friends, he complained: 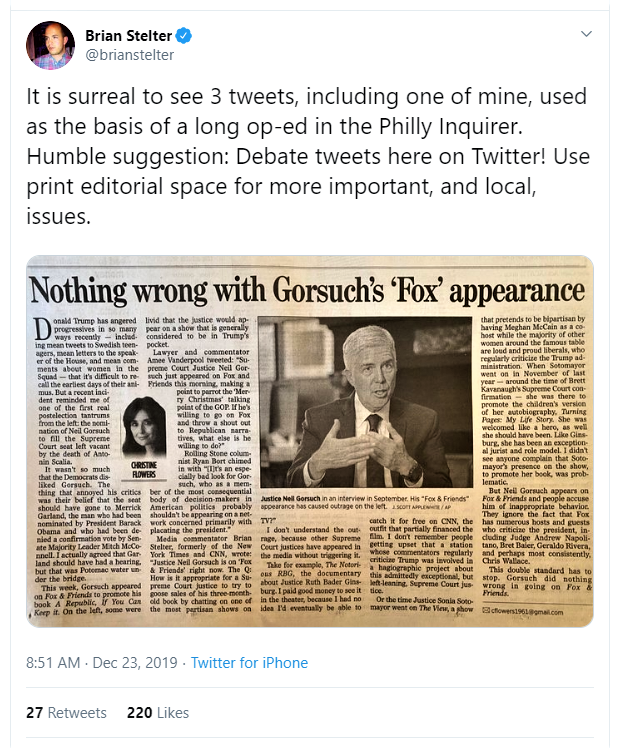 This complaint somehow ignores Stelter's own segments on his show trashing Trump's tweets, including one in November decrying "Trump's avalanche of absurd Twitter typos." He also complained when he had no Trump tweets to complain about.

“Wow,” Sister Toldjah responded.”The self-anointed king of ripping tweets posted by others including conservative commentators and Republican politicians on his weekly show “Reliable Sources” is upset someone is using one of his own tweets against him. Bless his heart."

Bonchie, another RedState author, summed up the situation with this response: “Your lack of self-awareness has to be a troll at this point.”

“Gotta be,” Sister Toldjah replied. “I mean, he couldn’t really be so utterly lacking in self-awareness, could he?” She called it "yet another gift from our favorite media firefighter all wrapped in glittery paper complete with a shiny red bow."

The Gorsuch book, which is entitled A Republic, If You Can Keep It and was released in September, also drew the attention of fellow RedState writer Susie Moore, who responded to Stelter’s tweet by noting:

Of course, Stelter didn’t take issue when Justice Gorsuch appeared on his own network, CNN, to hawk his book. ... (Because CNN isn’t awash in partisanship.)

Nor did he take issue with justices Sonia Sotomayor or Stephen Breyer appearing on The Late Show with Stephen Colbert to hawk theirs.

The writer of the original Inquirer column, Christine Flowers, argued that the Left should chill out about TV appearances by Supreme Court justices. After the Stelter tweets, Flowers added: "I wonder if that space I am occupying in his brain rent free comes with a washer-dryer and street parking?"

NewsBusters previously reported that Gorsuch used his Fox & Friends appearance to state: “This wonderful republic really is a miracle in human history, and there's no greater privilege than the opportunity to spend a lifetime in its service.”