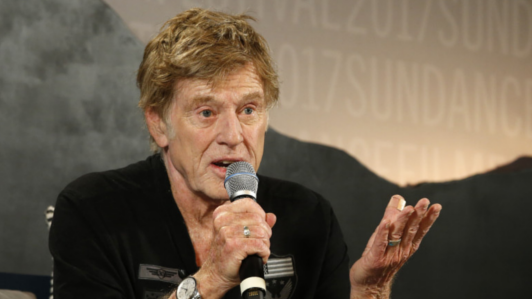 Well-known climate alarmist and retired actor/director Robert Redford continued his assault on President Trump on Friday by calling the GOP official “one unqualified authoritarian” whose “depraved indifference to the climate crisis” does not define “Americans' commitments or the character of our nation.”

“The clock is ticking so loudly” that “the rest of the world can hear it,” he stated. “With enough outrage, enough action and enough voices rising together, we just might have a chance to compel a reversal of this nonsense.”

His opinion article was posted on CNN's website, where Redford claimed that "millions" of people were "shocked" by Trump's "short-sighted foolishness" in pulling America out of the Paris climate agreement.

The actor noted that the President’s choice to make that change on the first day available under U.N. rules “simply reveals his immoral dedication to isolating us from the world community by willfully ignoring the biggest, most urgent threat facing human civilization.”

The activist held on to the hope that a new president in 2020 could make his "first order of business" a re-entry into the climate change accord.

Redford added that “we shouldn't even be facing this horrible reality.”

In contrast to Trump, Redford had high praise for cities like Salt Lake City, Utah that have tried become "100 percent powered by renewable energy,” saying they reflect, "hundreds of mayors and governors who have made transitioning to clean energy over the next 20 years their priority.”

As you might expect, Redford added a caveat to his victory lap: “I only wish it were enough” to solve the global situation.

“I'm not sure if [my proposal] will work,” the liberal activist stated, “but I know without question that we will all suffer if we don't try.”

As NewsBusters reported in April, the actor/director has already claimed that the planet is in an “irreversible point” on climate change. If that's true, why is he still slamming Donald Trump on this issue?