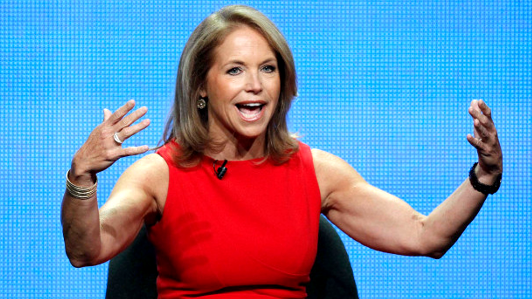 Even though it’s been more than a decade since Katie Couric hosted a news program on ABC, CBS or NBC, “America’s Sweetheart” is still popular with many journalists who continue to shower her with praise and awards.

That behavior continued on Saturday evening, when Couric received a 2019 Medal for Lifetime Achievement in Journalism during a ceremony where the liberal anchor stated: “I’ve been doing it for so long that I think people know I’m fair-minded and trustworthy."

According to an article written by Tom Jones, a senior media writer at the Poynter Institute school for journalists in St. Petersburg, Florida, Couric asserted:

I hope (people) see me as a reasonable voice and someone who also is interested in hearing other people’s perspective because I try to use my platform to -- when I can -- just hear people out and I encourage them to be respectful. …

If we could facilitate more reasonable conversations and find that Venn diagram where we do overlap and agree on certain aspects of issues, then we could actually make progress.

“More than 500 were in attendance to see Couric interviewed on stage during the Bowtie Ball by Poynter Senior Vice President Kelly McBride,” Jones reported, noting that the discussion turned to what is probably the most famous question she ever asked.

In 2008, Couric queried vice presidential hopeful Sarah Palin which newspapers and magazines she read to get her news, which led to her being asked the same question on Saturday evening.

“I read a lot on my phone,” she replied. “I still actually get a print copy of the New York Times. ... I think the way a paper is laid out tells you a lot about editorial priorities.” It also comes as no surprise that Couric reads newsletters, Twitter posts and Apple News entries and listens to programs on National Public Radio.

Meanwhile, the anchor best known for a career on television says she doesn’t watch much TV news, only occasionally watching evening newscasts and rarely tuning in to cable shows on CNN, the Fox News Channel and MSNBC.

Her response to those viewpoints? “Wow, we live in two different Americas.”

Couric added the new cliche that people are “looking for affirmation, not information,” and amazingly claimed news programs “don’t want to alienate people who like President Trump, who don’t want to him to be called racist or some of the things described as racist.”

“And yet I think journalists feel a moral obligation,” she continued before noting that “it’s a very tricky time” for people presenting the news.

However, Couric also slammed cable news networks that “report with bias” as “increasing the polarization” across the country. “I think a lot of places are [doing that], not just Fox and MSNBC and CNN,” she stated. “A lot of social media is an echo chamber because there aren’t conversations going on. … It’s just a very toxic, divisive time in our culture.”

As you might expect, Couric’s claim that she is “fair-minded and trustworthy” is contradicted by a “Profile in Bias” from the Media Research Center (the parent company of NewsBusters) posted in 2006.

Five years later, the MRC updated that list just as Couric left the CBS Evening News due to low ratings. She most recently served as global news anchor for the Yahoo! online service.