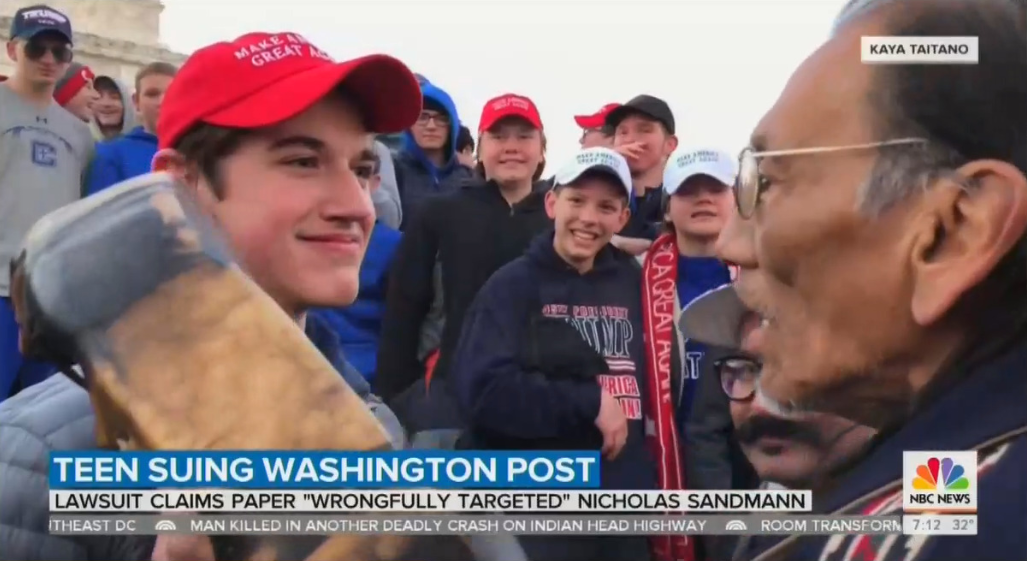 The case involving a student from Covington Catholic High School in Kentucky and a Native American activist took a dramatic turn on Monday, when a federal judge in the Bluegrass State changed his earlier ruling that denied Nicholas Sandmann’s choice to sue the Washington Post for defamation.

The original incident took place in front of the Lincoln Memorial in Washington, D.C., in mid-January, when the 16-year-old junior and his fellow students took part in the nearby March for Life rally with several of them wearing red “Make America Great Again” caps.

According to an article posted late Monday by Gregg Re, a commentator with the Fox News Channel who is also an attorney, District Judge William O. Bertelsman dismissed the first lawsuit in July on the grounds that the $250 million action violated the newspaper’s First Amendment free speech rights.

However, the new decision was the result of an amended complaint submitted by the teenager’s legal team, which argues that the newspaper negligently and incorrectly reported on the encounter.

Videos documenting Sandmann's encounter with Phillips went viral -- including some clips that did not show the full incident.

[The online clips] prompted widespread accusations that Sandmann was a racist who had approached Phillips and mocked him.

“Within days, though, more complete footage from the day showed several members of the Black Hebrew Israelites, a fringe religious group, heckling Sandmann and his classmates with homophobic and racist language,” the commentator stated.

The complete video showed Phillips approaching Sandmann and banging a drum just inches from his face while the teenager just smiled and stared forward.

Bertelsman's ruling in July specifically concerned reporting by the Post, citing claims by Phillips that Sandmann had "blocked" him and "would not allow him to retreat” while ignoring the fact that the activist had “an unsavory reputation.”

That decision dismissed all of Sandmann's claims because the Post never mentioned him specifically and referred only to groups of “hat-wearing teens.” The judge maintained that “the words used contain no reflection upon any particular individual” and thus could not be defined as defamation.

In addition, the judge ruled that the newspaper used language that was “loose, figurative” and “rhetorical hyperbole,” which is protected by the First Amendment.

As part of Bertelsman’s new decision, he stated that discovery should be undertaken concerning the “context” of the clash. After that, the judge could make a summary-judgment ruling -- or send the case to trial.

In a statement to the Washington Times, Todd V. McMurty, one of the lawyers for Sandmann and his family, said the ruling "preserves the heart of Nicholas Sandmann’s claims."

McMurty also tweeted: "The ruling bodes well for the NBC and CNN cases as well," referring to other outstanding lawsuits concerning those outlets' coverage of the encounter.

As you might expect, an article in the Style section of the Washington Post on Monday had a very different view of the situation. Media reporter Paul Farhi emphasized that Phillips’ description of the encounter was his “opinion,” and the newspaper “is not liable for publishing” it.

Nevertheless, L. Lin Wood, another lawyer in Sandmann’s legal team, tweeted that the decision is “a big win” that “reaffirms my career-long belief that our system of justice works.”

Wood also stated: “Nicholas Sandmann deserves his day in court against WaPo. Now he will get it.”