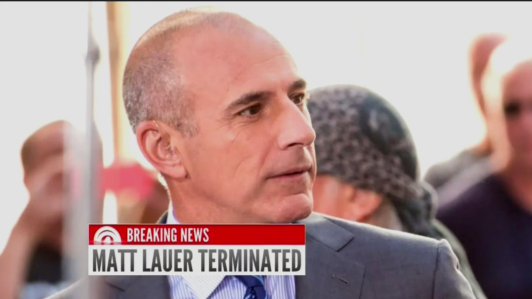 Just when it seemed that Matt Lauer had finally left the public stage, several women have come forward with “fresh claims of sexual harassment” against the former Today anchor.

The new information will be revealed in an upcoming book written by Ronan Farrow under the title Catch and Kill, which will be published on October 15. In response, Lauer has hired several “high-powered lawyers” to defend himself against claims made in the book.

According to an article posted on Wednesday on the New York Post's PageSix.com website, reporter and columnist Sara Nathan noted:

[A] source revealed that Lauer and his team are well aware of what is in the book after being given the opportunity to comment and fact-check by Farrow’s fact-checker, Sean Lavery.

These survivors have bravely made the decision on their own terms to come forward in the context of this book’s reporting.

In a statement of their own, Farrow’s publishers, Brown and Company, stated they are “extremely proud of the important reporting in Catch and Kill, which has been meticulously fact-checked and vetted.”

The corporation also noted that the book details “surveillance and intimidation deployed by wealthy and connected men to threaten journalists, evade accountability and silence victims of abuse.”

While the accuser’s relationship has been characterized in the past as an “affair” by NBC sources, Nathan stated that the accuser’s lawyer, Ari Wilkenfeld, noted: “At no point in time did I say or do anything to encourage NBC to downplay my client’s allegations. We clearly indicated an absence of consent.”

The columnist stated that the accuser “went to NBC chiefs about the affair on Nov. 27, 2017. Lauer was sacked the next night after NBC News Chairman Andy Lack went over to his Upper East Side apartment to fire him."

At the time of Lauer’s exit, the woman’s attorney told Today that she was “terrified” people would discover her identity.

Then in April of 2018, Lauer released a statement in which he said:

I have made no public comments on the many false stories from anonymous or biased sources that have been reported about me over these past several months. …  I remained silent in an attempt to protect my family from further embarrassment.

I fully acknowledge that I acted inappropriately as a husband, father and principal at NBC. However, I want to make it perfectly clear that any allegations or reports of coercive, aggressive or abusive actions on my part, at any time, are absolutely false.

Since leaving NBC, Lauer has finalized a multi-million-dollar divorce from Annette Roque, the mother of his three children, the Page Six reporter continued.

Nathan also noted that the former Today anchor “has been spending time in the Hamptons and, as friends have stated, he believes there is ‘no future’ for him on TV.”

As NewsBusters reported in November of 2017, Lauer hypocritically asked a guest if the Access Hollywood video in which Trump used vulgar language and described sexual antics was “the final, final straw” that would bring down the President.

Then in May of 2018, the network officials cleared themselves of tolerating and excusing sexual harassment in the workplace.