In case you’re not clear on it, John Oliver REALLY hates conservatives. And he’d rather be nasty than funny. On Sunday’s Last Week Tonight, the HBO host, again, compared Ted Cruz to a certain part of the male anatomy.

Last week, he stated that Ted Cruz, a Republican senator from Texas, “can lick my balls.” This Sunday, he expanded our knowledge to include the word “scrote.”

The turn of phrase came when Oliver turned his attention to Donald Trump “and his allies,” who tell people that “in more reflective moments,” they actually claim there's “one kind of immigration they love: legal immigration.” 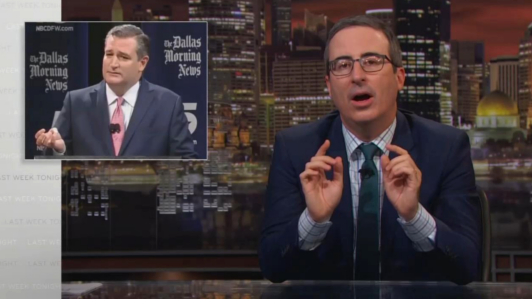 According to the Dictionary.com, “scrote” is an abbreviated form of the word “scrotum."

NewsBusters reported on September 9 that the comedian’s ongoing assault on Senator Cruz began last week, when he mocked the Texas Republican for taking part in a filibuster by reading to his children from the Doctor Seuss book Green Eggs and Ham.

At that point, Oliver stated:

Oliver is more interested in trashing "racist," "evil" conservatives than he is in being funny. For his worst examples, go here.