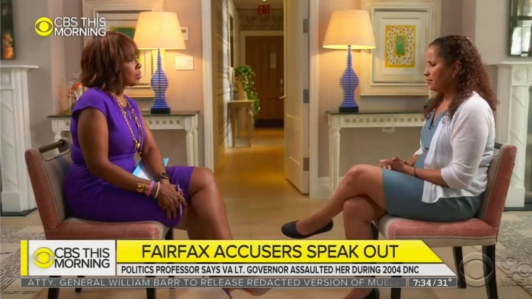 Earlier this year, Virginia was rocked by scandals involving the top two Democratic officials in the state. First was Governor Ralph Northam, who was criticized for appearing in blackface in an old yearbook, and soon after, Lieutenant Governor Justin Fairfax faced accusations of sexual assault.

While the controversies have not resulted in either Democrat stepping down, Fairfax brought the scandals back to life on Thursday, when he filed a lawsuit against CBS for airing interviews with both women accusers. As a result, the Old Dominion official is seeking $400 million in damages.

According to an article posted by Oliver Darcy, senior media reporter for CNN, the claim was filed in federal court in the Eastern District of Virginia. It asserts that the interview resulted in defamation and "severe emotional distress.”

In April, “CBS This Morning co-host Gayle King aired interviews with Vanessa Tyson and Meredith Watson. Both women alleged that Fairfax assaulted them years ago, in 2004 and 2000, respectively.”

For his part, Fairfax has denied their claims and said the encounters he had with the women were consensual.

Hours after CBS began promoting King's interviews, Fairfax's office issued a statement saying that [he] had been "steadfast from the start.”

[A] serious, fair and impartial investigation and examination of the facts would demonstrate that these allegations are false and that he engaged in no wrongdoing whatsoever.

Prior to the sexual assault allegations, it was thought that Fairfax had a good chance of becoming the governor if Northam were to step down.

However, Fairfax argued that CBS and King failed to do their due diligence before airing the interviews with Watson and Tyson.

The lawsuit contended that King "failed to ask basic questions" of the two women and “failed to separately investigate the allegations in advance of the airing date, and instead only spoke to Watson, Tyson and their representatives."

In addition, Fairfax has charged that CBS "failed to interview other individuals who may have been able to confirm or contradict the allegations."

In another interesting twist, the lawsuit claims that CBS employs a lawyer who is a mutual friend of Watson and Fairfax, as well as an eyewitness to the encounter Watson had with Fairfax. That eyewitness "has stated to multiple people" that Fairfax "did not rape or sexually assault Watson."

As if that wasn’t curious enough, the complaint argued that the CBS lawyer either was "unable to prevent CBS from airing the Watson interview" or "did not take steps to prevent CBS” from broadcasting the story.

This took place “despite knowledge from the eyewitness and Fairfax" her story was "false and that there was an eyewitness corroborating that Watson's story was false,” Darcy noted.

A CBS spokesperson responded: "We stand by our reporting and we will vigorously defend this lawsuit."

As NewsBusters reported in February, ABC, CBS and NBC quickly dropped the stories about the Democrats -- even though there had been no resolution to any of the scandals.