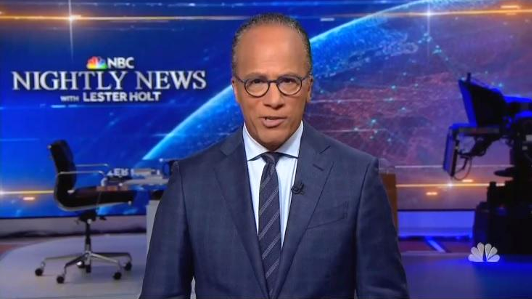 Even though many individuals in the “mainstream media” get annoyed when they’re accused of producing “fake news” and are called “the enemy of the people” by President Trump, their fellow liberals have no problem showering them with praise and honors for their “caring, fact-based journalism.”

The latest person to benefit from this practice is Lester Holt, anchor for the weekday NBC Nightly News program, who is set to receive the 2019 Walter Cronkite School Award for Excellence in Journalism at Arizona State University in Phoenix on November 4, the late newsman’s birthday.

Lester Holt is a fantastic role model for our students and all journalists for his insightful, caring, fact-based journalism and stories that focus on the impact of major news events on everyday Americans.

He embodies the cherished news values of accuracy, honesty, fairness and objectivity championed by Walter throughout his long career.

Elsewhere in the article written by Chris Fiscus -- director of communications for the school and head of the Arizona PBS outlet -- Holt was cheered for hosting “NBC’s flagship Nightly News broadcast since 2015, following eight years as anchor of the newscast's weekend edition and 12 years as co-anchor of Weekend Today.”

The article then asserted that Holt is known “for his outstanding work in the field,” and he has “reported on breaking news events from around the globe.”

Of course, the press release carefully avoided discussing Holt’s support for slamming the “Betsy Ross flag” as a throwback to the time of slavery, and provided zero coverage of the nation’s 10-year-long economic expansion.

A study by the Media Research Center’s Rich Noyes found that the Democratic debates, which Holt co-hosted, were essentially a two-night donation to liberal goals. Noyes wrote, “A Media Research Center analysis finds 70 of the 102 distinct questions at the two debates echoed liberal talking points or were framed around a liberal world view, vs. only 13 that challenged liberal/Democratic assumptions.”

Holt’s Nightly News has also started a series called “My Big Idea.” Essentially, it’s Democrats getting softball questions about whatever far-left agenda they want to put in place.

We can only hope that the graduates will be more “insightful” and “fact-based” than the NBC newsman getting this year’s award.