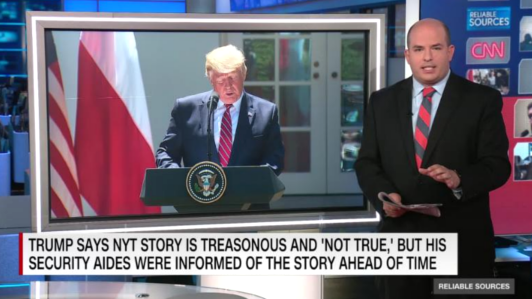 It’s not a surprise when the New York Times and Brian Stelter – chief media correspondent for CNN –  agree that Donald Trump is recklessly attacking the press. However, when the Wall Street Journal joins those other outlets, more people pay attention.

The Journal accepted an op-ed from Times publisher Arthur Gregg Sulzberger under the title “Accusing the New York Times of ‘Treason,’ Trump Crosses a Line." The pull quote in the paper was “The Founders considered it [treason] the gravest of crimes. Tossing the charge around is irresponsible and wrong.”

The third man named Arthur Sulzberger to run the Times slammed the President’s “increasingly extreme rhetorical attacks against the news media.” In his editorial, the publisher responded harshly to the President’s accusation that the newspaper had committed “a virtual act of treason” by reporting that the United States has been “ramping up cyber attacks against Russia’s power grid.”

Trump stated the article was “not true” and “treasonous” and came from a “once-great paper” that is “desperate for a story, any story, even it [it’s] bad for our country.”

As part of his article on the subject, Stelter asserted that the coordinated effort was “a remarkable show of solidarity -- especially since the Journal's opinion pages are relatively supportive of Trump.” He added "And it is part of a broader effort across the news industry to stand up for First Amendment values.”

"This is a profoundly important issue, one that has an impact on journalists - and citizens - everywhere. Attacks on press freedom are global and broader than any one news organization," a Times spokeswoman said. And the Journal op-ed was submitted "to emphasize that point."

Sulzberger wrote "Many news organizations, including the Times, determined the accusation wasn't even worth reporting, a sign of how inured we've grown to such rhetorical recklessness.” However, Sulzberger continued to up the ante by noting:

Which presents a troubling question: What would it look like for Mr. Trump to escalate his attacks on the press further?

Having already reached for the most incendiary language available, what is left but putting his threats into action?

In an attempt to put the final nail in Trump’s coffin, Stelter stated that the President’s “casual use” of the word "treason" started recently.

“He tweeted it for the first time last September,” the CNN anchor said, in response to an anonymous "senior official" op-ed, which was also in the Times. “He has used it more than half a dozen times this year.”

Okay, Mr. Stelter: Now count how many times the liberal media uses the word "treason." Bill D'Agostino made a video after the New York Daily News wrote "OPEN TREASON" about Trump on its front page. CNN and the Times weren't outraged. They joined in. When Tom Friedman agreed it was treason on CNN, did Stelter and Sulzberger call him up and tell him it was "irresponsible and wrong"?

PS: Stelter and these newspapers didn't consider that the younger Sulzbergers may not be the most pro-America cheerleaders one can find. Recall this passage from the 1999 book The Trust (by two liberal reporters). The current publisher's World War II veteran grandfather -- nicknamed "Punch" -- and his father Arthur Jr. (joke-nicknamed "Pinch") had a fight over Vietnam after Junior had been arrested twice in anti-war protests in the early 1970s:

"If a young American soldier comes upon a North Vietnamese soldier," Punch said, "which do you want to see get shot?" Arthur Jr.'s answer was calculatedly provocative. "I would want to see the American get shot," he replied defiantly. "It's the other guy's country; we shouldn't be there."

To Punch, such sentiments bordered on treason, and he exploded in anger. "How can you say that?" he yelled as Arthur Jr. tried to defend his position. Years later Arthur Jr. remembered those tense moments on the [Boston] Common as the worst fight he and his father ever had. "It's the closest he's ever come to hitting me," he said.