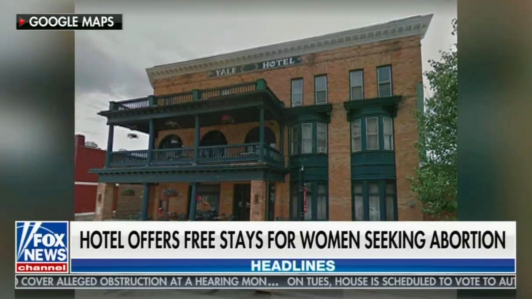 The dinosaur publication Time magazine, which you may have forgotten still existed (or you only see at the dentist now), still pumps out liberal spin and reporting from a left-leaning perspective.

The latest example of that trend is an article published in the Sunday, June 9 edition that focused on a small hotel in Michigan offering pregnant women free stays and no-cost transportation from states that have “severe restrictions” on abortion.

In an item written by Alejandro de la Garza, the Time reporter stated:

In May, Shelly O’Brian wrote in a Facebook post that her small-town, 100-year-old hotel located in Yale, Mich., would offer lodging to women coming from other states with more severe restrictions in order to have an abortion.

She had no idea of the enormous response that the single post would garner, both in anger from those who opposed her initiative and support from those heartened by her action.

Of course, the article depicted those on the other side as representative of violent haters ready to attack O’Brien. .

On the other side of the abortion issue, de la Garza asserted, are kind-hearted, wonderful individuals.

“I’ve been flooded with overwhelmingly positive responses,” she added. “I have little old ladies coming in and writing me $25 checks to put towards the cause.”

The Time correspondent explained the reason for O’Brian’s offer as “the passage of several new, restrictive state abortion laws” in what she described as “Alabama, Ohio, Georgia, Arkansas, Missouri or any of the other states that follow” that legislation.

Not surprisingly, O’Brian “is opposed to those restrictions” and “wanted to do something to help women unable to seek abortions in their home states.”

In her original post, she noted: “We cannot do anything about the way you are being treated in your home state.”

She later added that she had been contacted by organizations willing to provide free transportation to the hotel. “We've got some amazing people in our village. ... [W]e've got your backs.”

“I just hoped it would maybe make a few women who were feeling isolated and afraid feel like there was someone out there thinking of them,” she told de la Garza. “And maybe if someone was feeling desperate, they would feel a little less desperate.”

The Time reporter also noted: “However, as the Yale Hotel becomes yet another hot spot in the national battle over abortion rights, she says she may also have to divert some of her new resources for safety considerations.

“I’ll probably also have to up my security a little,” O’Brian noted. “It’s a small town, but with all the threats we’ve gotten, honestly it does make me a little nervous.”

De la Garza concluded his article by quoting her one more time: “My grandkids live here. I don’t think people understand that we have heartbeats too.”

Just another day at Time magazine.