During primaries like the one currently underway for the 2020 presidential campaign, Democrats are fond of claiming that, unlike “rich Republicans,” they “stand up for the little guy.” That concept became much more difficult to promote on Thursday after a report showed how lucrative of a legal career Senator Elizabeth Warren (D-MA) has had, even though N.Y. Rep. Alexandria Ocasio-Cortez quickly rushed to her defense and even took aim at a --- wait for it --- female Washington Post reporter's salary.

According to our friend David Rutz at the Washington Free Beacon, the socialist official has not endorsed anyone yet, but she has “shown a clear affinity for Warren,” as evidence by Ocasio Cortez defending Warren after the Senator posted a list on her official website of 56 cases she worked on during her career as a law professor.

The Washington Post reported Warren made up to $675 an hour while consulting for committees representing both claimants and creditors in asbestos-related bankruptcy cases.

That information directly contradicts Warren’s stated proposals to “build an America that works for everyone, not just the wealthy and the well-connected."

After CNN's Andrew Kaczynski tweeted while linking to the Post article by Annie Linskey and Elise Viebeck, AOC came out swinging: 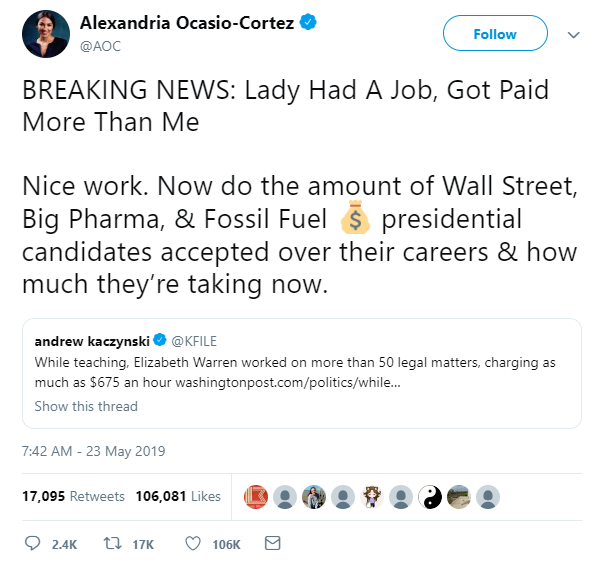 As Rutz astutely noted, the Congresswoman “has also launched broadsides at the Washington Post Fact-Checker, The Hill, Politico and CBS News.”

While Kaczynski spent Thursday being ratioed on Twitter for an article he didn't even write, the far-left Congresswoman didn't appear to either read or care about the fact that, as the Washington Examiner's Tiana Lowe stated, the information was provided to The Post by Warren's campaign. So in other words, Linskey and Viebeck were only their due diligence as journalists reporting on a story to provide more information (good or bad) about a candidate to voters.

So much for standing up for fellow women and especially fellow liberal women. Perhaps it's alright to continually attack the media in the eyes of liberal media apologists so long as you're not the President or someone on the right.