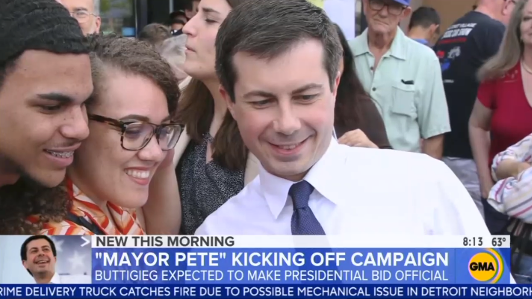 With at least 20 Democrats running for the presidency in next year’s election and the Mueller report failing to kick President Trump out of the White House, what can the liberal media do to fill the time between now and November 2020?

For NBC News, this is an opportunity to sing the praises of any Democratic candidate in the race, including South Bend’s “Mayor Pete” Buttigieg in a post sharply criticized as “worse than a glorified press release.”

In an article posted on Monday, political reporters Alex Seitz-Wald and Adam Edelman swooned over the mayor by chronicling his character as changing “from a data geek to [a] leader with heart.”

The reporters noted that Buttigieg’s political career began in 2011, when he “emerged victorious from a crowded Democratic primary and then trounced his Republican opponent.”

“Those who know him and have worked alongside him say Buttigieg, now 37, came into office thinking like a hired-gun consultant, full of big ideas and piles of numbers and studies to transform the city,” the writers noted. “Good things started happening right away,” Seitz-Wald and Edelman stated. “Some $200 million in investment poured into downtown, and new condos, offices, parks, restaurants and cafes sprang up.”

"He was a young dynamic leader with a young dynamic team in place," said Tim Scott, president of the South Bend Common Council. "His team was just being aggressive and proactive, looking at data and looking at new urbanism, the latest and greatest trends in technology, community investment."

A “self-described introvert“ (an odd trait for a politician), Buttigieg ran into another problem when an 18-year-old African-American was shot and killed while sitting on his front porch near Buttigieg's boyhood home, and the mayor had to meet his mother.

"I had no relevant skills for this situation,” he stated. "What mattered to her was that I showed up.”

"From that moment on,” the mayor began to “operate differently,” the reporters noted.

Meanwhile, Buttigieg himself was changing:

In 2014, he deployed to Afghanistan for six months with the Navy Reserve.

Stripped of his power and his fancy degrees, which were of little value in a war zone, Buttigieg -- who went to a private high school and then Harvard -- grew closer to fellow Americans from all walks of life.

When he came home, Buttigieg “won re-election with more than 80 percent of the vote,” decided to “reconcile my professional life with the fact that I am gay,” and “met his future husband, Chasten Glezman.”

Also in the article, Seitz-Wald and Edelman oozed that Buttigieg is a “candidate who has shaken up the presidential race unlike any other.”

But that same day, Caleb Howe on the Mediaite website hammered the article, calling it “worse than a glorified press release” and noting: “It would be passé, even quaint, to note that you won’t see such fawning over any Republican. Not now, nor in the last 20 years -- from NBC News.”

“There is not a campaign in the world that wouldn’t pay good money for such a loving work of hagiography,” Howe stated. “But in 2019, you don’t have to. If you’re a Democrat … the right kind of Democrat.”