CBS News Reports Favorable Results of Its Own Poll, Ignores the Rest 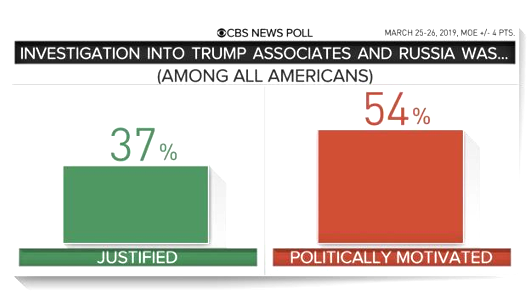 Financing your own poll apparently means never having to say you’re sorry for the results -- especially when that TV channel’s news division simply chooses to ignore whatever findings go against the network’s bias.

That was apparently the case late last week, when anchors for CBS News focused on the result that 77 percent of those polled think the entire Mueller report should be released to the public.

Another aspect of the poll taken March 25-26 that didn’t get much coverage indicated that only 37 percent of those surveyed believe the years-long investigation was “justified.”

A CBS News poll just out this evening on the Mueller report found 77 percent of Americans want the full report released publicly. A summary delivered on Sunday said that Mueller found no evidence of collusion between the Trump campaign and Russia. But Mueller said he drew no conclusion on obstruction.

Then on Thursday’s edition of CBS This Morning, co-anchor Gayle King added:

As we wait for the Justice Department to decide how much of the Mueller report we can see, a new CBS News poll finds a majority of Americans want the document to be made public.

That poll shows 77 percent want the special counsel's findings on Russian election interference to be released.

“Only about one-third of all respondents believe that Robert Mueller cleared President Trump of illegal activity,” King noted.

In addition, elections analyst and writer Bruce Stanford responded by noring that “Democrats would be wise to drop this and move on. But they won’t.”

Then on Friday, Townhall.com reporter Timothy Meads examined the poll and stated:

[T]he most recent poll of 1,002 Americans also showed  that 60 percent said it is very likely or somewhat likely that "Senior Trump advisors had improper dealings with Russia before Trump was sworn in as president."

But when asked whether the Democratic Party should "move on" from the Russian collusion investigation, 58 percent of those polled said Democratic officials in Congress should "drop [it] and move on to other issues."

Unsurprisingly, the exception to the rule was that 66 percent of the Democrats declared that officials in Congress should keep investigating the Russia matter.

“These views have not changed much from earlier this year,” the report noted. “Most of those who say there were improper dealings still would like to see the report released.”

When asked about various ways the report's findings made them feel, half of Democrats (50 percent) said they felt "disappointed," and a quarter also said they felt "angered" (28 percent). Meanwhile, most Republicans said "pleased" (69 percent) and also "relieved" (63 percent).

More Americans think Mueller's investigation was conducted fairly than unfairly, but four in 10 are taking a wait-and-see approach, while 66 percent of those surveyed were following news about the Mueller report at least somewhat closely, including a third who are doing so very closely.

This survey’s findings are similar to another poll conducted recently by Rasmussen, which found: “Now that Special Counsel Robert Mueller has finished his investigation of the Trump campaign’s alleged collusion with Russia, most voters say enough is enough. But many Democrats want to keep on going.”

In addition, 61 percent of voters want House Democrats to drop their investigations into the matter.

The Rasmussen survey also found that only 31 percent of all likely U.S. voters think congressional Democrats should do their own investigation even though the Mueller probe has failed to prove that the Trump campaign colluded with the Russian government.

Yes, the liberals will continue investigating until they find a crime, the opposite of what normally happens.