Britain to Investigate Journalist for ‘Misgendering’ Someone on Twitter 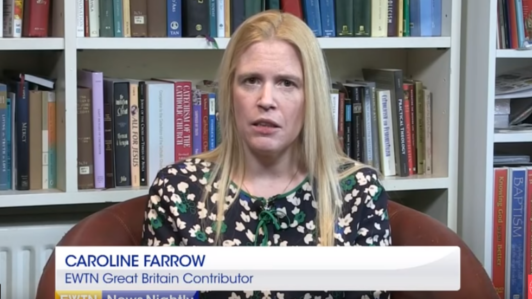 Have you wondered how far the liberal war on traditional values has gone? Over in Britain, a Catholic journalist is finding out just how far the left will go to enforce its orthodoxy.

Caroline Farrow, a commentator and journalist for the UK Catholic Press, is being prosecuted and harassed for the crime of “misgendering” another woman’s daughter on Twitter.

According to an article in the Evening Standard of London, by Katy Clifton, Farrow is being investigated under the Malicious Communication Act, which bans sending information “for the purpose of causing distress or anxiety.”

As part of the inquiry, Farrow was told that the police in Surrey County want to conduct a “taped interview under caution” after receiving reports she had made transphobic comments online. While the mother of five children noted that cooperating with the probe is voluntary, she added that she could be arrested if she doesn’t go along.

At that time, the Catholic woman stated she does not believe people can change gender even though Green’s transgender daughter, who was born under the name “Jack” but is now called “Jackie,” became one of the youngest people in the world to undergo sex-change surgery after turning 16.

“Trans girls are far more at risk of abuse, prejudice, and we know that from the statistics around self-harm and suicide,” Green said during the program.

If you’re wondering if what’s happening to Farrow has been reported in American media, it hasn’t. One might think that, even if liberal journalists aren’t concerned about this happening in the U.S., they might be disturbed by the threat to a free press. Apparently not.

“Six months after the on-air debate,” Clifton stated, Farrow and Green “were involved in a spat on Twitter, during which Mrs. Farrow allegedly used the wrong pronoun” to describe Jackie.

For her part, Farrow called the decision to launch an investigation an “outrage” before stating: “I can't sleep I am so furious.”

After that, Farrow tweeted on Monday: “Had a message from [the] police tonight about my tweets following an appearance on GMB.”

“Susie Green has reported me for misgendering her daughter,” she continued. “I have pointed out to the police that I am a Catholic journalist/commentator, and it is my religious belief that a person cannot change sex.”

“Nonetheless, following my appearance on national television, the [police] have decided I need to be interviewed under caution for misgendering Susie Green’s child.”

“I don’t even remember said tweets,” Farrow added. “But I really [don’t] give a flying toss” about the situation,” which she described as a “public witch hunt.”

“I have done nothing wrong, nothing illegal,” she noted, “and will happily do jail time for my right to say that people cannot change sex.”

As if that wasn’t distressing enough, Farrow also said she has since received online abuse:

Meanwhile a group of people have terrified and harassed my family.

During a final post on Wednesday, Farrow stated: “In a time of universal deceit, telling the truth becomes a revolutionary act.  Going offline for a few days. Back soon.”