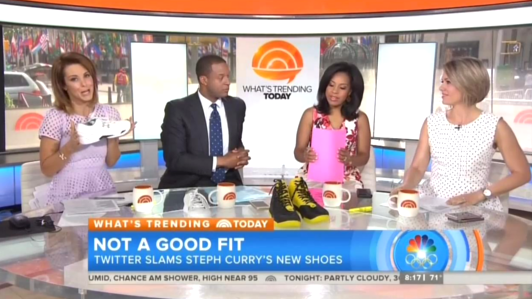 One word that is not often used to describe the mainstream media these days is “objective.” This concept indicates that a reporter or journalist should not have any hidden connections with people or products being discussed.

That philosophy took a major hit on Thursday, when NBC News correspondent Stephanie Ruhle was accused of promoting Under Armour shoes without letting viewers know she has “close ties” with the sports apparel company’s CEO, Kevin Plank.

In an article written by Alex Griswold, a staff writer for the Washington Free Beacon website, the co-host of MSNBC Live with Ali Velshi “reported on and boosted Under Armour shoes on the air without disclosing to viewers that she had an existing relationship” with Plank, and that the couple has developed “close ties in recent years.”

While advising the CEO on business matters, the correspondent was rewarded with flights on Plank’s private jet for defending the shoes in cases of negative press about the products.

Quoting from a report by the Wall Street Journal, Griswold also noted:

Under Armour employees found the arrangement “problematic” and believed Ruhle and Plank were in a romantic relationship, according to individuals familiar with the matter.

The Under Armour board also uncovered “emails that showed an intimate relationship between them," those people said, but the company [claimed] the two were "friends."

“Both Ruhle and Plank are married,” he said, and not to each other.

In June of 2016, the company released a brand of sneakers named for Stephen Curry, a popular professional basketball player for the Golden State Warriors.

The products “were universally roasted as ugly and boring,” Griswold continued. “Under Armour employees were told not to address criticism because Ruhle told the company that “she would step in and discuss the shoes on TV.”

Sure enough, archived video of Ruhle’s appearance on NBC's Today program that weekend shows she defended the shoes "without disclosing her and Plank's relationship -- whether in business, friendship or otherwise -- or revealing that she coordinated with Under Armour."

"I really like this shoe," Ruhle then told co-host Craig Melvin.

In addition, the NBC News correspondent argued that the backlash to the white shoe was just due to people being more familiar with the "sleek black sneakers" Curry usually wore on the basketball court.

"This, just in time for Father's Day, dads!" she said, holding the shoes and looking into the camera.

As if her bias wasn’t obvious enough, Ruhle also defended the sneakers on social media, saying she planned to buy a pair for her father.

“Ruhle would continue to hawk Under Armour products and feel-good PR campaigns at least a dozen times throughout the next two years,” Griswold noted, while never disclosing her reported relationship or role as an advisor.

She also tweeted that Under Armour is an “incredible brand story” that “started with an SBA (Small Business Administration) loan.”

After Colin Kaepernick began kneeling for the Pledge of Allegiance at NFL games, the company posted: “@UnderArmour stands for the flag and by our Athletes for free speech, expression and a unified America.”

Of course, Ruhle promoted the “news” by tweeting: “It’s not just the athletes stepping in & standing up for free speech … now comes the brands. Thank you, @UnderArmour.”

It comes as no surprise that Griswold concluded his article by posting: “MSNBC did not respond to a request for comment.”