Less than a day after Representative Alexandria Ocasio-Cortez announced her “Green New Deal” to the public, reaction to her grandiose plan to end air travel and rebuild all buildings in the country proposal has been sharply divided. Yet, appearing on Fox and Friends, Geraldo Rivera praised it as “idealistic,” “aspirational” and a “wish list” from the New York socialist.

Co-host Steve Doocy began the discussion by asking the Fox News contributor what he thought about the proposal, which “would essentially remake everything as we know it” and eliminate airplanes, forcing anyone who wants to travel to New York City to walk there.

Instead of replying, Rivera just couldn’t wait to state that he’s “a fan of Alexandria Ocasio-Cortez,” who represents much of the borough of Queens, which he claimed is “the epicenter of immigration in America.”

As such, he asserted that “138 languages are spoken in the borough. It’s estimated 300,000 residents in the borough are undocumented immigrants. Maybe it is a modern brave new world.”

At that point, Doocy and fellow co-hosts Ainsley Earhardt and Brian Kilmeade reminded Rivera that he was asked specifically for his views on the proposal itself.

He responded that the Green New Deal “is idealistic, it is aspirational. It is kind of future think, it’s a wish list.”

Kilmeade then referred to the parts of the deal that were intended to convert fossil fuels into total clean and renewable energy, rebuild or upgrade every building to be more energy efficient and give money to anyone, even those who don’t want to work.

“You aspire for total control?” Kilmeade asked. “You aspire to support the people that don’t work?” 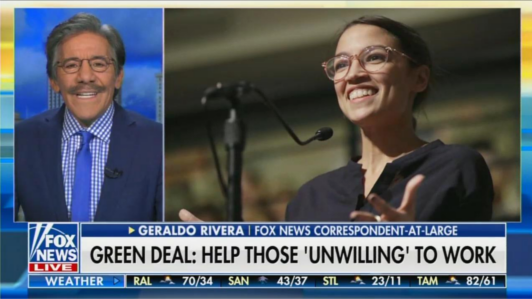 For instance, there should be throughout the southwestern fork of the United States and Florida and Puerto Rico certainly, every house should have solar power.

You know, all those canyons, all that wind. There are alternatives. I think that absolutism is what curtails the, the dream of the progressive part of the country.

“The other thing is physics,” Doocy stated. “I mean, they haven’t figured out how to do this stuff yet.”

“This is so impractical and implausible,” Kilmeade noted. “It’s a huge step back. This makes people think: ‘This is farcical.’”

How do you justify working your tail off to make the money that you have, and then you have to give 90 percent of it away, and you have to give it to people more money because they’re unwilling to work?

It’s not that they can’t. They choose to stay at home and spend your money.

That question apparently flustered their guest, who stumbled several times during his reply. “Again, Ainsley, I think that is kind of the gracious generosity of the young who won’t be paying the bill for the other folk as you indicated,” he responded.

But, Kilmeade replied, instead of a dream, “this is a nightmare.”

As NewsBusters previously reported, the Green New Deal has already received uncritical, enthusiastic support from such liberal outlets as the New York Times, the Washington Post, Chuck Todd of MSNBC and CNN.