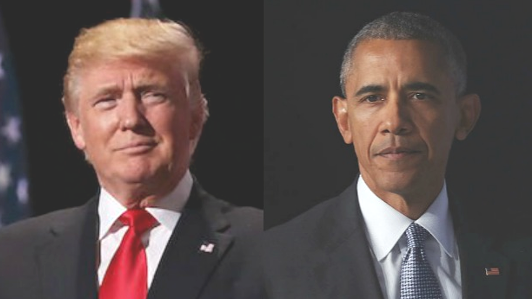 Five years can be a very long time, especially at the Washington Post, which criticized President Trump for "turning the White House into a White Castle” fast food restaurant while hosting the national champions of the Clemson Tigers football team.

But back in 2014, the liberal newspaper viewed the eating habits of then-President Barack Obama much differently by describing the Democratic occupant of the White House and his fondness for cheeseburgers as a "love story.”

In an article on Tuesday morning, reporter Allyson Chiu asserted that when the players “entered the White House’s opulent State Dining Room on Monday,” they “were greeted by a sight many had likely never laid eyes on before.”

She showed her disdain for the Republican president by noting:

In the center of the historic room that has hosted royalty, foreign dignitaries and celebrities, a long mahogany table gleamed under the glow of an enormous golden chandelier.

“Boxes of McDonald’s Quarter Pounders, Big Macs and Filet-O-Fish sandwiches were stacked in neat rows next to pyramids of packaged salads,” Chiu continued. “On a separate table, Domino’s pizzas and french fries repackaged in cups bearing the presidential seal basked under what appeared to be heat lamps.”

“I thought it was a joke,” one Clemson player could be overheard saying in a video shared on Twitter, “accurately capturing many people’s reaction” to the president’s food.

And of course, while seeking intelligent commentary on Trump, Chiu turned to her most reliable source: comedians on late-night talk shows.

On Monday evening’s edition of his ABC show, Jimmy Kimmel "didn’t even try to contain his laughter" when he joked: “Of all the crazy things Trump said and did over the weekend, this might be the craziest.”

He then showed a clip of the president telling reporters: “I think we are going to serve McDonald’s, Wendy’s and Burger King’s with some pizza. … I would think that’s their favorite food.”

“What would possibly make you think that?” Kimmel asked. “I’ll tell you what made him think that. ... He’s paying the check, so he had to get the cheapest food they could find.”

Meanwhile, Stephen Colbert and Seth Meyers “mocked the president for hosting a meal that appeared to cater less to the tastes of his guests and more to his own well-documented preferences.”

“On social media,” Chiu noted, “users didn’t hold back either. By early Tuesday morning, Trump’s fast-food feast was the subject of two Twitter moments, both chock full of shock and derision.”

“Some conservatives, however, slammed criticisms of Trump’s move as ‘elitist,’ arguing that ‘real Americans’ often eat, and enjoy, fast food,” she added.

However, the Washington Post’s coverage of Monday’s event was quite different from its reporting on May 19, 2014, when the newspaper ran an article with the headline: “President Obama and Cheeseburgers: A Love Story.”

That item, Post reporter Katie Zezima relayed that “President Obama made yet another trip to a burger joint Friday, taking four employees on a Washington construction project to Shake Shack.” Zezima asserted it underlined the notion that “Obama really loves cheeseburgers.”

Instead of hammering the president during the White House's emphasis on healthy eating, the Post correspondent decided to “take a look at some of the places Obama has eaten burgers in the past few years,” including Air Force One.

During his first ride on the airplane from Chicago to his inauguration in Washington, D.C., Obama reportedly said: “I'll see how you guys do a burger. Make it medium well.”

“He also asked for cheddar cheese, Dijon mustard, lettuce and tomato and a salad on the side,” Zezima noted. “Obama was then asked if the salad meant he didn't want fries. ‘Oh, I'll still take the fries,’ Obama said.”

Yes, five years is a very long time, especially when a Democrat president is replaced by a Republican, which makes all the difference to the Washington Post.