Sleazy: MSNBC's Al Sharpton Sells the Rights to His Life Story… to His Own Charity 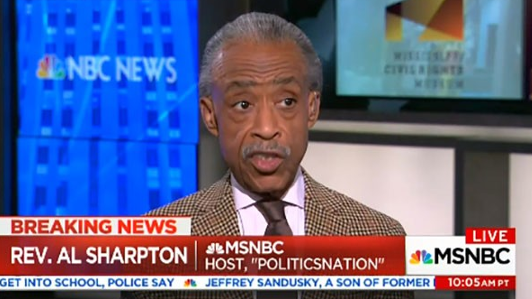 While Al Sharpton is certainly no stranger to controversy, his latest ploy has raised eyebrows across the political spectrum.

Before the liberal activist steps down as president of the National Action Network next year, he has apparently found a new way to make money off the charity he founded in 1991: selling his “life story rights for a 10-year period” for more than half a million dollars.

According to an article by Melissa Klein -- an investigative reporter for the New York Post -- on the nonprofit organization’s latest tax filing:

NAN can apparently turn around and sell those rights to Hollywood or other takers at a profit, but neither the reverend nor the charity would identify what producers are waiting for such Sharpton content.

The document does not indicate when Sharpton, who is president of NAN, gets [at least $531,000], which is above and beyond the $244,661 he already pulled down in compensation from the group in 2017.

“What does that have to do with anything?” Sharpton asked from South Africa, where the host of PoliticsNation -- an hour-long Sunday morning program on the liberal MSNBC cable channel -- was preparing a broadcast celebrating the 100th anniversary of the birth of civil rights leader Nelson Mandela.

Of course, Sharpton stated that he didn’t propose the deal, which he claimed came from two NAN board members who wanted to create a source of revenue for the civil-rights organization after he steps down.

“This way, they make a profit from the beginning and all of the revenues,” he said.

As if that wasn’t bizarre enough, Sharpton also claimed that he had contracts for two movies -- with a third contract in the works.

One of these films is already in production, he said, while a play was also being shopped around. None of that includes “other assets that would generate revenue for NAN, including a recording where James Brown is singing and he’s talking, and video footage of him with Michael Jackson.”

In addition, Klein reported that NAN stated a private donor put up the money to make the purchase, but the charity would not release that person’s name.

“The nonprofit took in $6.3 million in revenue last year,” the reporter noted, which was “up from $5.8 million the year before, according to its tax filings. Its years of outstanding taxes were paid off in 2014.”

If NAN paid too much it could run afoul of IRS rules regarding excess benefits given to a nonprofit’s key officials, which might put its tax-exempt status in jeopardy, Marcus Owens, a former IRS official and a partner with the Loeb & Loeb law firm in Washington, DC.

“When I see this kind of thing, it just makes me roll my eyes because there’s so much potential for funny business,” said Linda Sugin, a Fordham University Law School professor and associate dean.

Meanwhile, this topic was also discussed in an article by Jazz Shaw, a weekend editor for the HotAir website, who called the arrangement “a sweetheart deal if you’ve ever seen one.”

“This is simply incredible,” Shaw asserted before noting that Sharpton should take any money he receives from this arrangement and apply it “toward the more than $700K in back taxes he still owes, both personally and for several of his failed startup companies.”

Pardon me for being excessively tough on this character, but I’ve been observing Sharpton’s antics since the ‘90s. There’s never been a time when he didn’t seem to be involved in one scam or another.

He has also been one of the most prolific race-baiters and anti-semites on the national stage. How he continues to merit the sort of respect paid to him by national media and far too many politicians is a mystery.

“Still, as sure as the sun rises in the east, you can expect some sort of retirement honors for Sharpton, citing him for all of his ‘work’ to benefit minority communities,” Shaw added.

“The media can’t help themselves,” he concluded. “Perhaps Al and Louis Farrakhan can start some sort of retirement commune together.”

As bizarre as that concept might be, it certainly wouldn’t be as outrageous as Sharpton’s repeated efforts to fill his own pockets with other people's money.