Every now and then, anchor Shepard Smith seems to feel the need to distance himself from most of the other on-air personalities on the Fox News Channel, and Monday afternoon saw the latest example of that.

This time Smith had the opportunity to push a global warming agenda. The anchor began the segment by asserting:

Heat waves are getting stronger. Floods are growing larger. Wildfires are obliterating more of America’s landscape. It’s because of climate change that’s largely man made.

Our burning of fossil fuels is damaging planet Earth, and the time to stop it is running out.

“By the end of this century, climate change could shrink the U.S. economy by hundreds of billions of dollars,” he continued. “That is the warning in a new report released on Friday, ahead of schedule, by the Trump Administration.”

Smith then quoted the report as predicting that “climate change has doubled the destruction from wildfires in the American Southwest. It warns farmers: ‘You could see your crops devastated by droughts and heavy rain in the decades to come.’”

As if that wasn’t alarming enough, he also claimed that “rising seas and storms could force tens of millions of Americans to move within the next century, and that some coastal cities are already seeing the effects,” though he didn’t list any examples.

In addition, the FNC newsman said the document “predicts extreme heat waves will get much worse, and that cities -- including Phoenix -- could have blistering triple-digit temps 150 days out of the year by the end of this century.”

Smith then tossed in some of his personal philosophy by asserting: “The climate science is accepted science. Governments across the nation are spending billions preparing for what’s to come. The U.S. military, too, [has spent] billions of dollars” on this matter.

Next, the anchor chided conservatives and people in the GOP:

This is not a political issue, it’s science. But some have made it political -- especially Republicans.

And as a result, a lot of folks have missed this report. 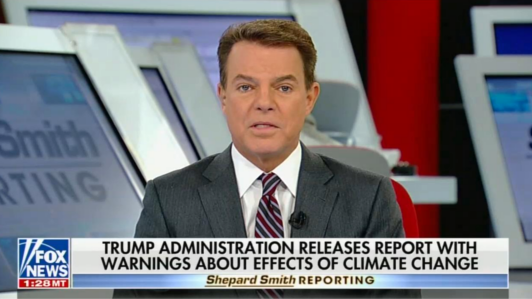 “It was dropped, as I said, ahead of schedule on Black Friday, when a lot of Americans are busy shopping, eating Thanksgiving leftovers and spending time with the family,” he stated. “But it’s extremely important.”

Also on Monday, the GOP occupant of the White House said he had indeed read the report, but in terms of the economic consequences, he responded: “I don’t believe it.”

This response is similar to what Trump stated during an interview with Lesley Stahl in a mid-October episode of CBS’s 60 Minutes, when he noted: “Something’s changing, and it’ll change back again. I don’t think it’s a hoax … but I don’t know that it’s manmade.”

As NewsBusters previously reported, this is far from the first time the weekday anchor has disagreed with conservatives.

In July of 2016, Smith chastised Louisiana Governor Bobby Jindal for using the term “All Lives Matter,” which the FNC host claimed was a “divisive” phrase.

Soon after that, Smith abandoned any claim to neutrality when he claimed that Trump “trades in racism.”

Just a few days later, the FNC anchor slammed Voter ID laws as “designed to keep some minorities” from voting.

And as a caravan of migrants from Central America neared the U.S.-Mexican border, Smith joined his fellow cable newscasters in erecting “a wall of falsehoods” when he reassured his viewers: “There’s nothing at all to worry about.”

Here’s hoping Smith’s accuracy as a climate change alarmist is as poor as whatever few conservative credentials he has left after all his years on Fox News.