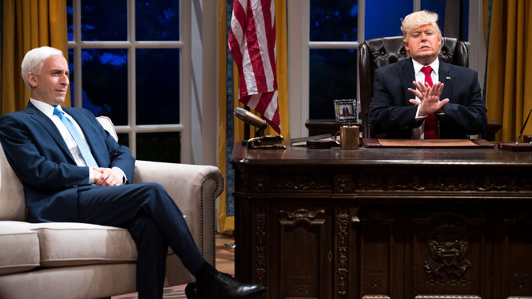 Someone needs to tell the folks at the Comedy Central cable television channel that in order to have the word “Comedy” in your name, you should actually be funny.

A perfect example of this aired on Thursday evening, April 27, when the low-rated channel debuted The President Show, which mostly consists of President Donald Trump impersonator Anthony Atamanuik sitting in the big chair in the Oval Office and Peter Grosz as Vice President Mike Pence seated on a couch nearby.

The losers dominating late night are in for a rude awakening when the smartest, handsomest, most winning-est president of all time enters the fray to address the nation.

The President Show brings television back to the people -- by putting a plutocratic billionaire behind the desk.

One segment began with “Trump” complimenting “Pence” for being “a nice guy.”

“Thank you, Sir. Thank you very much,” Grosz responded.

“But not everyone is as nice as you,” the Trump lookalike continued. “I think it’s important to let the audience know who’s being nice and who’s being not nice in our very first desk piece called 'Nice! Not Nice!'"

“Not Nice: Marine World,” he continued before awkwardly stating: “The whales are sixes, the dolphins are fours, and the only tens are penguins, and they’re all married.”

The next “Nice” entry was “my lovely daughter Ivanka. Her skin is like Italian marble, and her hair is like really great hair.”

“Not Nice: the German people who booed her when she defended me at a conference in Berlin,” he added. “Disgusting! This is the worst thing the Germans have ever done. Ever.”

“Nice: clam chowder: thick, creamy, hot. I could drink it with a straw,” the “president” continued.

“I’m going to mix it up,” the presidential lookalike then told the man posing as the vice president.

“Not Nice: Press Secretary Sean Spicer,” he stated. “He’s a muttering slobbermouth with a taste for his own foot. Why don’t I fire this guy?”

“Nice: Sean Spicer’s TV ratings,” the “president” said. “I can’t fire this guy. His ratings are tremendous. We love ratings, and Spicer brings them in.”

Thursday’s edition of the new show also contained a bizarre conversation with liberal firebrand Keith Olbermann, in which Atamanuik asked the former ESPN host: “Do you miss sports? Because I pretend to like them.”

“Every day I do these shows about 'you' called The Resistance," Olbermann replied, “I miss sports a little bit more.”

Every once in a while, I wake up in the middle of the night going: ‘Please just put me somewhere I can read the scores.

According to an article written by Lindsey Ellefson for Mediaite, we learned the answer to: “What do Marine Le Pen and Ivanka Trump have in common?”

“Le Pen is the far-right French presidential candidate that Trump hasn’t quite endorsed, but also hasn’t, uh, not endorsed,” Ellefson stated," while Ivanka is smart and sexy.

As NewsBusters previously reported, this isn’t the first time the Comedy Channel has tried to make fun of a Republican president.

In a program that began a decade ago entitled Lil’ Bush, the show followed "the misadventures of Lil' George Bush and his precocious pals Lil' Condi, Lil' Rummy and the unintelligible, foul-mouthed wisecracker Lil' Cheney.”

“They're like the Lil' Rascals except they have access to weapons of mass destruction,” according to a statement from the channel. “And instead of getting into mischief and learning stuff from other kids in the neighborhood, the little people in Lil’ Bush square off with rivals such as Lil' Kim Jong-Il and Lil' John Kerry.”

“Each week the show follows the Lil' gang (along with irascible dad George Sr., sweetly sinister Bar, and dumb as paint Jeb) as they get mixed up in all sorts of crazy adventures from taking a field trip to Iraq to just taking crank,” the statement added.

“This show will probably not end up on any top ten list of the Republican National Committee -- unless it’s an enemies list.”

Judging from Comedy Central’s track record, The President Show will leave the airwaves long before its Republican targets leave the White House.