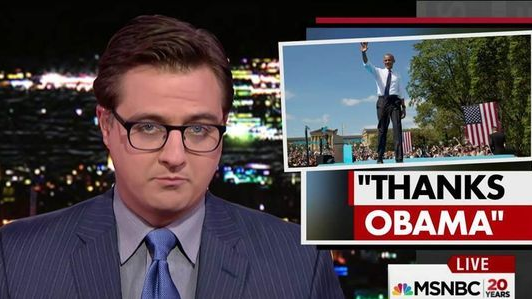 Once again, a hostile liberal -- this time Chris Hayes, host of the MSNBC weeknight program All In -- has shown that he is willing to go to any length to diminish President-elect Donald Trump and his family before the Republican officially moves into the White House on January 20.

On Wednesday, the Politico website's Julia Ioffe complained about the fact that one of Trump's daughters -- Ivanka -- will set up an office in the White House that is usually reserved for the first lady, which led Ioffe to post on Twitter: “Either Trump is f***ing his daughter or he's shirking nepotism laws. Which is worse?”

The reason given for the family's departure from tradition was that Trump's wife, Melania, will continue living in New York City until their son, Barron, completes his coursework in a nearby school next year.

In an article on the Twitchy.com website just hours later, Lori Ziganto noted that it didn't take long for the political website to fire Ioffe, whose post the reporter called “beyond foul” and led to Ioffe doing some “faux apologizing” on Twitter.

It was a tasteless, offensive tweet that I regret and have deleted. I am truly and deeply sorry. It won't happen again.

All that said, I do regret my phrasing and apologize for it. It was a crass joke that I genuinely regret.

“Oh, really; the phrasing?” Ziganto shot back. “Should you have used 'banging' instead then? Is that it? All you regret is being fired.”

“One thing that 2016 has sure taught us: The Left is going above and beyond in exposing just how twisted fringe they are,” she continued. “And when they are bitter, the nasty reaches epic levels.”

This tweet is "an obvious violation of Politico standards,” reporter Alex Pfeiffer stated before announcing: “Julia Ioffe is no longer with the publication.”

Enter MSNBC anchor Christopher Hayes, “who is currently literally defending Ioffe. Perhaps not surprising, as he has also defended bombing attempts because the explosives are 'not guns.' So sanity ain't his strong suit.”

Hayes first posted that he was “just now seeing the @juliaioffe news. Are you telling me after the last 18 months we're gonna get the vapors because of a single tweet !?!”

“Are you KIDDING me?” Ziganto asked in response. “You have the utter audacity to talk about vapors, Mr. Fainting Couch extraordinaire?”

“The press loses its collective mind (I think they do just share ONE) over every single Trump tweet. Every. Time,” she added. “Pearls are clutched, histrionics are rampant, and fainting couches have huge arse-shaped divots in them now.”

“Hardy-har-har,” the Twitchy reporter replied. “Boy, you are sick. She both literally and seriously mentioned incest. INCEST. That’s no joke, buddy.”

“But honestly,” the MSNBC host noted, “it almost feels like the only person in America who will never lose his job over an offensive tweet is Donald Trump.”

Todd Wilder chimed in by stating he feels: “That was a horrible thing to say, and I'm no Trump fan.”

“It was a horrible thing to say,” Hayes responded, “but I generally think people shouldn't be fired over tweets. I've said this a bunch.”

Ziganto then offered her opinion on the matter: “Perhaps she should be fired because she let it clearly be known that she not only has a bias against President-elect Trump, but that she cannot even control it. At all.”

“Imagine a journalist saying Obama was sleeping with one of his daughters,” @back_ttys remarked. That ”would be a year-long hissy fit.”

Regarding Ioffe's future, poster Gabriel Malor said her firing was an “easy call” since “The Atlantic announced her hiring last week.”

Meanwhile, @baldingschemer called her firing “the equivalent of going home early on your last day of work.”

Of course, all of this has happened long before Donald Trump takes the oath of office. Once that happens, things are just going to get even worse. Remember, “real news” outlets actually pay these people to "cover" politics.

PS: Two years ago, Chris Hayes did not seriously object to House aide Elizabeth Lauten resigning her job after a personal Facebook post knocking the Obama daughters for acting rudely at the Thanksgiving turkey pardon. It was a "worthwhile conversation" to debate whether she should have left her House job, but, actually that wasn't a "real issue."

HAYES: The Obama daughters appear to have had the indisputably, objectively correct reaction towards the entire turkey pardon tradition. In fact, there is perhaps no public event on the president's entire calendar more deserving of adolescent standoffishness than this bizarre, cringe-inducing ceremony.

So, let's focus on the real issue here: teenage contempt has never been more appropriate in any situation than when you are the president`s daughters watching him pardon a turkey named Cheese.