If you're a Democrat who's been stressed out regarding the electoral battle between Democratic incumbent President Barack Obama and his GOP challenger, former Massachusetts governor Mitt Romney, you can now rest easy because KPHO, the CBS affiliate in Phoenix, and WCPO, the ABC TV station in Cleveland, have already called the election with Obama as the winner.

During Friday's edition of "The People's Court" at 3:30 p.m. on the Phoenix station, a "lower-third graphic" scrolled across the bottom of the screen and stated that Obama had won with 43 percent of the nationwide vote, compared to Romney's 40 percent with 99 percent of all precincts reporting.

In addition, the graphic indicated that the incumbent had received 40,237, 966 votes while the GOP candidate got 38,116,216 ballots in his favor before the banner disappeared after 17 seconds.

Soon after, the Cleveland station posted a list of vote totals for the Nov. 6 election that again declared Obama the victor in the presidential election and even stated that Democratic incumbent Sherrod Brown was re-elected to his U.S. Senate seat.

It didn't take long for people to start criticizing the stations for trying to predict the future. 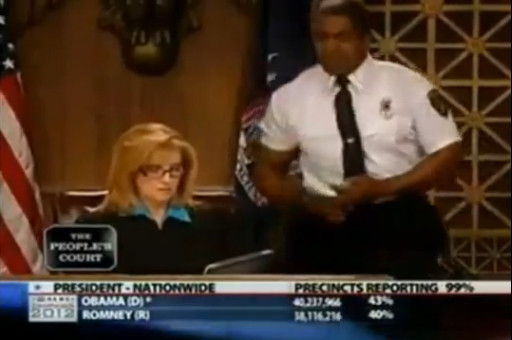 At MSN.com, which is an affiliate of the MSNBC cable channel, a blogger called the situation in Phoenix the "ultimate news goof" made by "bozos" and resulted from "dreamy calculations."

"We bet Romney's wishing he could take these idiots to 'The People's Court' right now," the poster added.

The blogger at fireandreamitchell.com stated that he believes "something very fishy is going on with the corrupt state-run media."

Do these media hacks have some sort of time machine they hopped in and went forward to Nov. 6?

Also chiming in on the time travel aspect of the controversy was the producer of the Walter and Johnson radio program on Classic Rock 93.7 in Houston, who said that:

I'm sick and tired of having news outlets who predict the news instead of telling you what happened. It used to be that the media would explain the outcome of recent historical events. Now they just pretend they're psychic TV journalists and take turns guessing at what will happen.

"This is why the rest of the world thinks we're all idiots: because we put idiots on TV as our spokespersons," he added, "and that's what they see when they look at American media."

However, Matthew Boyle -- an investigative reporter for the Daily Caller website -- contacted Michele Wallace, an executive assistant at the Phoenix station, who said:

On Friday, October 19th, during a test of KPHO-CBS 5's election returns software, we inadvertently aired a test graphic for about 15 seconds during an episode of "The People's Court." The mistake was caught quickly and taken off the screen.

With the election about two weeks away, the TV station routinely tests its equipment to ensure our viewers have the very latest results on election night. We regret the error and apologize to any view who was confused by the mistake.

Even if the "election predictions" are simple mistakes, they provide us with an interesting glimpse into how the people at these stations behave when they don't think anyone is watching or listening.

After what happened to David Chalian when he made a racial slur and lost his job as a result, I hope that "discretion is the better part of valor" is adopted as their new motto.