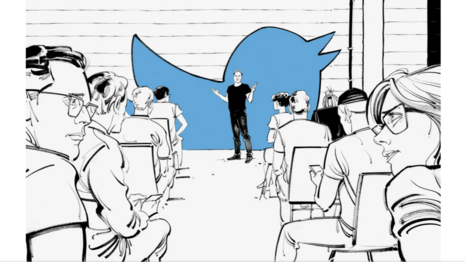 On Tuesday, New York magazine published a looooooong hit piece on what a horrible boss Elon Musk supposedly is at Twitter yet the biggest revelation was its admission that it favors censorship. This admission by the authors Zoë Schiffer, Casey Newton, and Alex Heath appeared in "Twitter’s staff spent years trying to protect the platform against impulsive ranting billionaires — then one made himself the CEO."

Before getting around to slamming Musk, the New York authors celebrated the early free speech era of Twitter before absurdly claiming it was somehow ruined by Orange Man Bad.

In its early days, when Twitter was at its most Twittery, circa 2012, executives called the company “the free-speech wing of the free-speech party.” That was the era when the platform was credited for amplifying the Occupy Wall Street movement and the Arab Spring, when it seemed like giving everyone a microphone might actually bring down dictatorships and right the wrongs of neoliberal capitalism. That moment, which coincided with the rise of Facebook and YouTube, inspired utopian visions of how social networks could promote democracy and human rights around the world.

Twitter rode this momentum to become one of the most important companies in tech: an all-consuming obsession for those working or merely interested in politics, sports, and journalism around the world. Frequently, the platform set the news agenda and transformed nobodies into Main Characters. What it lacked in profits it more than made up for in influence.

No one understood how to weaponize that influence better than Donald Trump, who in 2016 propelled himself into the White House in part by harnessing hate and vitriol via his @realDonaldTrump feed. A new consensus that the site was a sewer made it worth a lot less money.

...After the election and the blown deal, Twitter overhauled its content-moderation policies, staffed up its trust and safety team, and committed itself to fostering “healthy conversations.” Never again would it let itself be used by a tyrant to sow discord and increase polarization. Two days after the January 6 insurrection, the platform banned Trump; the company had seen the toll of unfettered speech and decided it wasn’t worth it.

So just one man, the "tyrant" Donald Trump, caused Twitter to give up on free speech and embrace censorship.

And this was the reason that Musk bought Twitter; to return to its era of free speech by ditching the censorship which was blamed on Trump. For this embrace of free speech, Musk earned the derision of New York magazine -- including the bizarre charge that although he approves free speech for the platform, he disapproves of it in the workplace, when he was letting go of staff who liked everything censorious:

If “free speech” was his mandate for Twitter the platform, it has been the opposite for Twitter the workplace. Dissenting opinion or criticism has led to swift dismissals. Musk replaced Twitter’s old culture with one of his own, but it’s unclear, with so few workers and plummeting revenues, if this new version will survive. As one employee said in December, “Place is done for.”

Psst! It's a private company owned by Elon Musk. A lot of bosses have rules for the office that have nothing to do in relation to how it treats the customers or, in this case, the Twitter users.

Finally, the Twitter files were invoked as something of supreme horror: 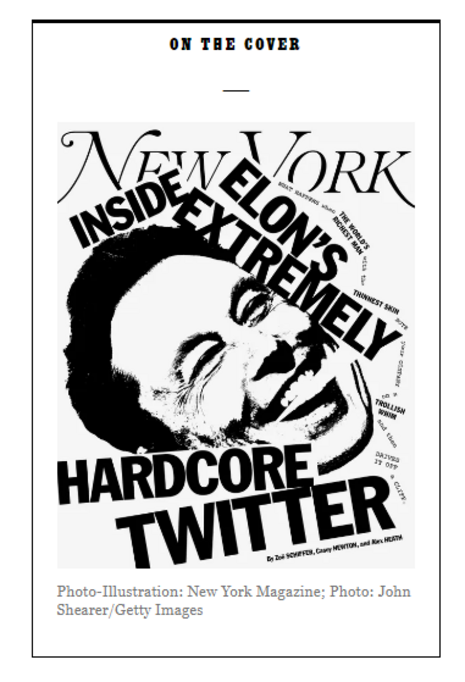 Only a small inner circle knew Musk had invited the journalist Matt Taibbi to comb through internal documents and publish what he called “the Twitter Files.” The intention seemed to be to give credence to the notion that Twitter is in bed with the deep state, beholden to the clandestine conspiracies of Democrats. “Twitter is both a social media company and a crime scene,” Musk tweeted.

In an impossible-to-follow tweet thread that unfolded over several hours, Taibbi published the names and emails of rank-and-file ex-employees involved in communications with government officials, insinuating that Twitter had suppressed the New York Post story about Hunter Biden’s laptop. After it was pointed out that Taibbi had published the personal email of Jack Dorsey, that tweet was deleted, but not the tweets naming low-level employees or the personal email of a sitting congressman.

“What a shitty thing to do,” one worker wrote in a large Slack channel of former employees. “The names of rank and file members being revealed is fucked,” wrote another. Employees rushed to warn a Twitter operations analyst whom Taibbi had doxxed to privatize her social-media accounts, knowing she was about to face a deluge of abuse.

The names but not the homes or phone numbers were revealed. Hardly the doxxing as practiced by Taylor Lorenz. Also the Taibbi tweet thread, which went into great detail as to the cooperation between Twitter and government agencies (such as the FBI) and officials was very easy to follow. And is New York magazine actually "insinuating" that Twitter did not suppress suppress the New York Post story about Hunter Biden's laptop?

If the Twitter employees didn't want to be revealed aiding censorship perhaps they should have embraced Google's discarded motto of "Don't be evil."