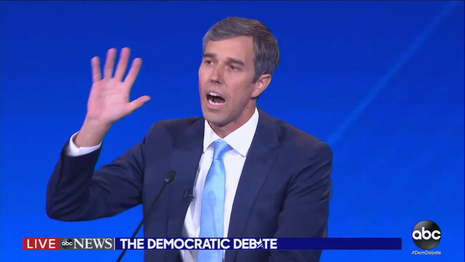 On Sunday, The Washington Post published a long article online that, in reality, was a loving paean to far-left Democrat and perpetual (losing) candidate Beto O'Rourke.

Although O'Rourke is running for governor of Texas, The Post conveniently skipped any mention of perhaps the Lone Star State's top issue in "Beto O’Rourke’s risky quest for votes in deep-red Texas," which would be the U.S.-Mexico border.

The article by Jade Yuan -- which appeared in Monday's print edition on page one of the Style section -- mentioned the border only twice as geographic reference points:

For six days and 10 events, I chased Beto from west to east across the state — a sliver of this mostly rural tour that began in his hometown of El Paso last month and traces the perimeter of the state, including the border with Mexico, before ending near Dallas in September.

Crowds have been rapturous and far bigger than expected, like the 1,000-plus people who came out in highly conservative Lubbock, or in Whitesboro, a majority-White city of 4,217 near the Oklahoma border...

And that was it. A grand total of just two mentions of the border despite illegal border crossings and the massive illegal invasions being at the top of the concerns of the deep-red sections of the border state of Texas. Of course, bringing up an issue which O'Rourke would obviously want to avoid while campaigning in the deep red parts of Texas would interfere with what is essentially an Post tribute to him.

To get an idea of their love for their candidate, let us review a few samples of The Adoration of St. Beto. It began with an Obama-like intro ahead of a campaign stop in tiny Spearhead (click "expand"):

Everyone in this 3,087-person Panhandle city knows that Beto O’Rourke is coming to campaign for governor today. It’s a major event, a big-time politician coming all the way out here, deep into rural oil country, where the landscape is dotted with pump jacks and cattle and grain elevators, and the worst drought in 10 years has sucked up all the water in the Canadian River so it’s just a dry bed of red dirt.

“People are buzzing! It’s a big buzz,” says Suzanne Bellsnyder, who owns the one coffee shop downtown. Local gossip networks have already alerted her that Beto (he’s achieved one-name celebrity status in these parts, like Cher) is next door having lunch. It’s a Saturday afternoon, and he’ll be speaking in a park, with the temperature hitting 105 degrees.

People are buzzing in a good way? Like, excited?

She smiles. Well, what do you think?

Alongside a photo of a handwritten note he left in a voter's door, Yuan gushed over O'Rourke as he compared voting to a marriage:

Could a victory for Beto lie not in liberal cities such as Austin or Houston but in spending these last precious three months of the campaign driving his Toyota Tundra to the least populous, most Republican parts of the state, mining for untapped votes?

“I mean, there’s a reason to do this,” Beto says in Spearman, sweating through his white button-down. Having been married for 17 years, Beto often says, he knows no two people agree on everything, but he’s hoping people around here might at least like his plans to repair Texas’s power grid or to pay teachers more.

If nothing else, maybe they’ll respect that he came.

It’s a typical marathon schedule for the 49-year-old father of three, who wakes up at 6 every morning to go for a four-mile run before driving himself and three staffers to every event, as well as knocking on doors in temperatures so high that tar from the road melts onto your shoes.

In Dumas, a Panhandle city that’s 55 percent Hispanic, truck driver Pablo Campos tells Beto he woke up at 3:30 a.m. so he could complete half his work shift and have enough time to go to the town hall gathering during his break. There, Mary Jane Garcia, 47, a devout Catholic, stood up to talk about the “spontaneous abortion” that saved her life when she miscarried at 17, and how scared she is that her daughters might be denied that medical care.

He pulls over on a farm road to commune with beautiful brown horses and a pony. “This will be the best part of my day,” he says.

Beto’s been reading Guthrie’s autobiography with his younger son, Henry, 11, and there is this quote he’s been thinking about a lot. The sentiment goes, Beto says, “‘I don’t like a song that makes you feel fat or skinny or too old or too inexperienced or too this or too that,’” and it’s a lot like what Beto wants to do with his campaign, to help Texans find common ground rather than alienating those who are transgender or immigrants. Guthrie was a uniter, he says. “This guy was for everybody.”

How nice of the awe-struck Yuan to faithfully protect the beloved Beto by not bringing up an issue he would prefer to avoid -- the border.