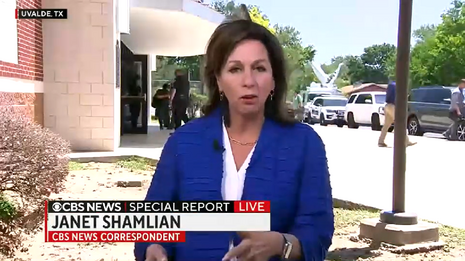 On Wednesday, just as a press conference about the tragic school shooting in Uvalde featuring Texas Governor Gregg Abbot was commencing, it was rudely interrupted by Democratic gubernatorial candidate Robert Francis O'Rourke who attempted to upstage the event. Was this a highly inappropriate political stunt by a losing candidate? Well, according to CBS reporter Janet Shamlian it was "very clearly staged" by the O'Rourke campaign.

Shamlian describes what happened just a few feet from where she was sitting at the press conference:

.@JanetShamlian reports on Beto O’Rourke confronting Gov. Abbott during presser: "There were two people across the aisle from me and a moment before the press conference started, they got up from their seats when Beto walked in ... This seems something very clearly staged." pic.twitter.com/eaAxrZP6Gt

As could be predicted, this case of honesty by a CBS reporter on what transpired at the press conference caused outrage by many on the left. Here is an example.

not only should this tweet be immediately deleted and a public retraction and apology be issued, @CBSNews and @JanetShamlian you should both be embarrassed and ashamed of this coverage. absolutely disgraceful.

As we noted on Wednesday, this moment of sobriety from a solid reporter came amid a sea of liberal activism on gun control and giving uncritical oxygen to O'Rourke's stunt.