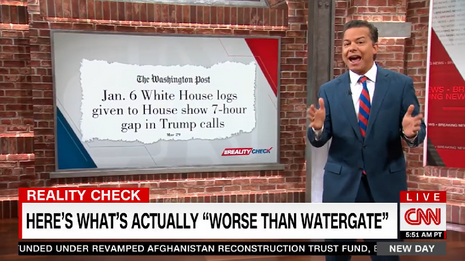 How many times have you heard a media figure breathless blurt out that meme that has become a favorite among leftists to hype a supposed scandal by conservatives and Republicans? Of course, the media never applies it to Democrats so they can rest easy that their media allies will never declare the emails on Hunter Biden's lap to be "Worse Than Watergate!"

The latest iteration of "Worse Than Watergate" came to us this past week with stories about a supposed seven hour gap in President Donald Trump's phone record on January 6, 2021. Unfortunately for this narrative it was debunked by CNN on April 1 in "Official review of Trump phone logs from January 6 finds record is complete."

It was appropriate that this CNN fact check came out on April Fools day because one of the big fools who swallowed the phone gap story was their own John Avlon who on Wednesday's New Day declared it to be, wait for it--- "Worse Than Watergate." As a bonus, his report is even accompanied with a "Worse Than Watergate" chyron.

Yes, it's bigger than Watergate. Worse than Watergate. That was a regular refrain from ex- President Trump when he tried to hype up supposed Democratic scandals. That was part of his defect and project playbook. But it's coming back to bite him as we find out there are more than seven hours of missing phone records in a basically blank presidential schedule during the hours around January 6th and the attack on the Capitol. I mean seven hours makes the 18 minutes of erased Oval Office tapes around Watergate look like a game of patty cake.

Now, we don't yet know what was excluded from the full record or why. But it's a bit of historic irony that one of the bylines on the story that broke the news belongs to none other than Bob Woodward, of course one of the legendary reporter around Watergate. And for what it's worth, the other half of the team, Carl Bernstein, has been outspoken in saying that Trump's attempted coup is in fact worse than Watergate.

It's going to be interesting if Avlon will be reminded about his "Worse Than Watergate" labeling of a scandal that was debunked by his own network. Perhaps he should just own it and wear a "WORSE THAN WATERGATE" tattoo on his forehead.

However, at least Avlon had the excuse of eagerly jumping the gun on a phone gap that was debunked on April 1. MSNBC's legal analyst Jill Wine-Banks has no such excuse since her article, "Trump's phone log gap could be much worse than Nixon's Watergate tape erasures," was published on April 2, a full day after the April Fools Day debunking of the phone log gap story.

Since Wine-Banks is a former Watergate prosecutor she just couldn't resist the comparisons.

My phone rang off the hook as soon as the news hit. According to reporting from The Washington Post, internal White House phone records turned over to the House Jan. 6 committee included a gap of seven hours and 37 minutes. A lot can be said in 457 minutes.

Comparisons to the 18.5-minute gap in a crucial President Richard Nixon recording were immediately obvious to me. After all, I was the prosecutor who cross-examined Nixon’s secretary, Rose Mary Woods, about how that gap came to be. And I am not the only one to make that connection.

...It is often said that Nixon’s cover-up was worse than his underlying crime. The reverse is potentially true for Trump. Trump’s records gap is 25 times as long as Nixon’s, but his alleged crime could be incalculably worse.

The real scandal here is why Wine-Banks allowed her story to be published AFTER the phone log gap was debunked by CNN. Was it a matter that she put a lot of work into it and was just incapable of declaring "never mind" on all that effort? Perhaps CNN's John Avlon could put that question to her.

We pause now for a few moments until the mainstream media declares yet another supposed conservative or Republican scandal as "WORSE THAN WATERGATE!!!"