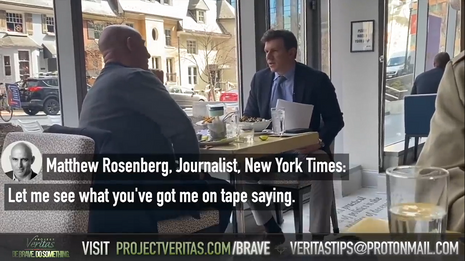 Remember when it was reported last week by Politico that the New York Times is "loath to be seen as reacting" to the Project Veritas videos in which Times reporter Matthew Rosenberg laughed at the drama queen hysteria of several of his colleagues over the supposed mental duress they supposedly suffered on January 6, 2021 at the Capitol building?

Unfortunately for the Times, it appears that Project Veritas and James O'Keefe now live in every waking (and perhaps sleeping) thought of the Times staffers as revealed by a memo, parts of which were reported on by Tuesday's Politico Playbook PM.

The paranoid attitude of the memo seems to be trust no one, suspect all strangers:

A SIGN OF THE TIMES — In the wake of Project Veritas’ most recent sting operation on the NYT, Times employees were sent a memo by newsroom leaders warning about potential efforts to catch NYT employees in the future. “We strongly favor transparency in our work, and it’s good for the public to hear from you about what you do at The Times. But we’d like to remind you to take extra care if someone unfamiliar to you asks you to talk about The Times. Please be aware that this could be an effort to surreptitiously record you with audio or video,” reads the memo from deputy managing editor CLIFF LEVY and senior VP of culture and comms CYNARA CHARLES-PIERRE.

This may seem strange but right after my SXSW crypto panel I was approached by someone who I'm almost sure was a Project Veritas operative. She kept asking me questions about project veritas and how "we should stop them." Creepy encounter. Probably recorded.

Of course it is a big assumption that anybody even cares about the opinion of a New Republic reporter since that periodical has faded into nearly complete obscurity.

If a stranger starts asking you weird questions, hit “record” on your phone and take a picture of them when you get a chance to.

Imagine going to your favorite pub and because a new bartender starts talking to you in a friendly way, your first impulse is to hit the "record" on your phone because you can't trust any strangers. Is that really a new bartender or is he (or she) really working for Project Veritas?

The paranoia among Times staffers, which now seems to be spreading into the rest of the mainstream media, is growing intense.