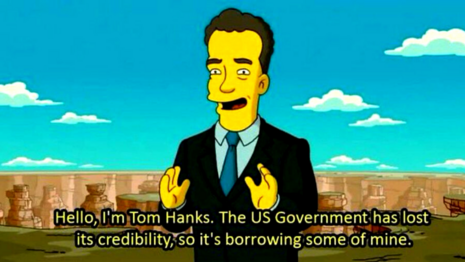 As soon as the Biden administration anniversary video celebrating itself with Tom Hanks narrating was released it was quickly mocked. Why? Because "The Simpsons Did It First!" Really. In an eerie replication of a scene from 2007's "The Simpsons Movie," Tom Hanks again served as a liberal government shill, except this time it was for real.

Even nonpolitical sites such as GameSpot took notice of this immediately after the official video was released by the Biden Inaugural Committee on Thursday, "The Simpsons Predicts The Future Again With New Tom Hanks Promo."

Actor Tom Hanks narrates a new video from President Biden's Presidential Inaugural Committee marking his first anniversary in office, making for yet another time The Simpsons has correctly predicted the future.

The video, which is intended to promote a recovering and resilient America, features Hanks--who was part of Biden's inaugural activities--in a role similar to the one he played in 2007's The Simpsons Movie. In the movie, the Environmental Protection Agency seals Springfield in a gigantic dome. Hanks, playing himself, makes a cameo as part of an ad for a new Grand Canyon, saying, "The US government has lost its credibility, so it's borrowing some of mine."

The Simpsons did it first! https://t.co/mYzpzq3FyS

In a very creative move, Erick Erickson used that Hanks ad from "The Simpsons Movie" and used it to introduce the first segment of the official Biden Administration self-celebration video...also narrated by Tom Hanks.

Oddly enough, the official Biden administration anniversary video is also quite funny in an unintentional way since it is chock full of hilariously empty platitudes while skipping certain embarrassing truths such as soaring inflation, loss of control of the border, the Afghanistan withdrawal debacle, the COVID test kit mess, supply chain failures, legislative failures, etc..

In addition to projecting a Pollyanna alternate reality, Hanks served up laughable platitudes such as this:

Every day is another day behind us and another step forward towards opportunity, prosperity, possibility.

Exit question: Which video will get the most views? The parody version featuring the cartoon Tom Hanks narrator or the Biden administration Tom Hanks shill video? As of this writing the parody version has way more likes than dislikes which is the opposite of the official video in which the dislikes are leading.